Appius Wight is particularly tall, sporting an average human build. The Force-weilding Mandalorian has a pale complexion that gives his bright blue eyes a piercing sheen. He wears his ashen brown hair short and well groomed.

the Mandalorian has long arms, hands and legs which are natural given his taller height. On his face is a very faint, light stubble, the same colour as his hair which is hard to see unless you are up close.

He has a long, diagonal scar above his hip on the left side of his body located where his left kidney used to be.

He retains a burn mark over his right shoulder which has mostly faded, but still shows visible signs of scarring up close. 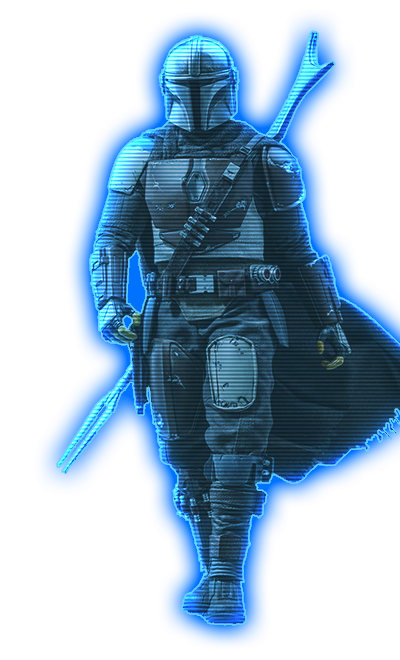 The Double-bladed Lightsaber, or Saberstaff, is a lightsaber weapon with a blade emitting from both ends of the hilt. Both plasma blades were powered by crystals in the hilt that determined their characteristics and color. The twin blades double the opportunity for both attacking and defending, making it a useful offensive and defensive weapon depending on the skill of the one who wields it. Both blades capable of cutting through virtually anything including blast doors given enough time.

The Brotherhood-issued Computer Linked Gauntlets are a piece of technology worn on the wrist that functions as a small personal computer, allowing rapid access to execute operations at any time or review limited information on the small viewscreen including details about armor, weapons or other possessions. Designed by the Shroud Syndicate for use by its members of appropriate rank.

The Holoprojector is a small and compact disc-shaped device, capable of recording, displaying, sending and receiving three-dimensional holographic transmissions.

The Tracking Fob is a small square handheld device with two antennas attached. A specialized tracking device, it allows the user to track a single life-form that has been keyed into the fob. It beeps and flashes red the closer the fob is to the target life-form. These tracking fobs are given to members of the Bounty Hunting Guild.

The Pure Beskar Mandalorian Armor is immediately recognizable and a show of wealth, made entirely from pure beskar and consisting of a helmet, shoulder pauldrons, wrist gauntlets, breastplate, codpiece, kneepads, as well as leg guards all clasped over a full body glove that provides both comfort and protection. The helmet possesses an iconic T-shaped visor as well as an antenna tipped with a macrobinocular rangefinder that can be pulled over the viewplate.

This helmet is fitted with an intricate, internal database that allow it to translate languages in real time at the cost of the helmets macrobinocular function. Only spoken languages are capable of being translated, as well as only one at a time. The languages are then translated into Galactic Basic.

However, the translation appears on the helmets H.U.D display, which can obscure the wearer's vision. Also, in order to translate, the receptors need to either hear the language clearly, otherwise it doesn't work. On top of this, it requires a huge amount of processing power and cannot be used at the same time as any other function of the armor.

However, using this feature drains power from the rest of the armor, leaving other features switched off or powerless for the duration of this light being on. It also makes Appius stick out ostentatiously like a sore thumb.

Appius' Beskar Armor is coated in a bright red paint from nearly head to toe. The helmet, chestplate, legs, and codpiece are all painted this colour.

In the middle of the chestplate is a vibrant golden lightning bolt that stretches from the top of the chest down to the lower abdomen. Underneath the armor is a plain brown undershirt whilst the boots of his armor itself are painted a deep purple colour.

The Scion of Taldryan Ring is an ornate band bearing the emblem of Clan Taldryan. The presence of the Force can be felt faintly within the material.

The Cubed Intensity Holocron is a vibrant, cube-shaped holocron containing vast depths of knowledge that can only be activated and used through the power of the Force. Data playback takes the form of any number of past Headmasters of the Shadow Academy.

At one point in time, Appius Wight believed the Mandalorian code to be more a rough guide than a set of strict rules to follow. This is no longer the case.

Now, he follows the tenants of the Resol'nare vigilantly, as he understands it as the way of life from which he came. He wears the armor, speaks the language, contributes to his aliit's welfare, answers the call of the Manda'lor when required. He swears to protect himself, as well as raise his children as Mandalorians now that he is a father, and above all else, protect his family.

Unfortunately, this dedication to his family and his code of honour can lead to him being manipulated by those that can take advantage of it.

Appius Wight is two things; a Mandalorian, and a Force user.

Many have often criticized him for this. Some claim hypocrisy, some claim simple stupidity, whilst some think he's just naive. Either way, it usually ends up resulting in others urging Appius to pick a side. Force User or Mandalorian.

Yet, he won't. Being a Mandalorian Force User is something Appius wears like a badge of honour. It's a big part of who he is, and if anyone else doesn't like it? Then to him, that's that's their problem. Not his.

Naturally, this leads to Appius being judgemental to those who criticize him for being nothing more than circumstances out of his control.

Appius "Zappius" Wight goes by his day to day life based on what his heart tells him to do, wearing it on his sleeves and never hiding his emotions. He rarely ever plans ahead, and often says the first thing that comes to his mind. Sometimes he can be calm, at other times angry. Though he's often caught with a smile on his face, a joke, and a handful of wit in his words for those with an ear to listen.

However, at the same time Appius is a reserved and introverted individual. Tragedy has struck this Mandalorian on more than one occasion. The loss of his family and the sting of betrayal are wounds that are hard to heal. As a result, he has a hard time trusting those he meets until he gets to know them better.

The destruction of his aliit sent Appius into a downward spiral that resulted in his turn to the Dark Side. He abandoned his beskar'gam, and believed he was destined to be alone in a galaxy that conspired against him.

That all changed when he met Ankira Irr. She became the first ray of light he had experienced in a long time. He became inspired by her kindness and her tenacity, she helped him rediscover who he was and he came to admire and love her, calling her ner cyare.

Shades of the old Appius come to the surface when he's around her. The same kind, gentle being he was before the destruction of his aliit. Though the Dark Sides influence can play with his mind, and after long periods of time apart he retreats back into his shell, aware of it or not...

Appius Wight is a firm believer that Niman is as legitimate a lightsaber form as any other. He has studied Form VI for over two decades, and as a result has become extremely proficient at incorporating Force based powers into combat.

These include, but are not limited too, Telekinesis to push and pull opponents. Force Lightning to Zap and kill enemies. Even using Amplification to increase his speed, strength, and stamina is not out of the realms of possibility for him.

Through Dun Moch Appius picks apart his opponents fighting style, belittling them to exploit their weaknesses using his varied training and knowledge of lightsaber forms to do so. However, as impressive as all this is, it's not without its flaws. Niman is a jack of all trades fighting style and Appius can struggle against opponent's that are simply better with the blade than he is.

As a result of being a Mandalorian Force User, Appius Wight from a very young age was inspired by the stories of Tarre Vizsla, the first Mandalorian to be inducted into the Jedi Order. From this, Appius has been inspired to follow Tarre Vizsla's example and combine his Mandalorian heritage with his powers in the Force. Including keeping and using a jetpack, lightsabers and Mandalorian armor to create a very unique style of offence in combination with his Force prowess in order to his opponents weakness and exploit their biggest flaws to the best of his ability.

However, this fighting style can be difficult to use when physically restricted by an opponent, the environment or if his equipment is destroyed.