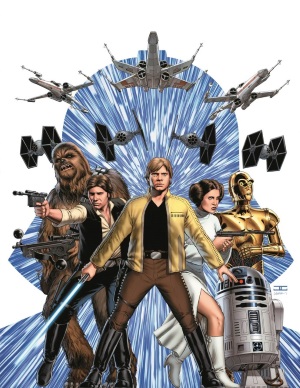 The series writer Jason Aaron gave us this bit of insight into what we can expect from the Star Wars title:

"John Cassaday and I and everybody at Marvel have been on the same page since the get-go. We wanted this to feel like the movies. We wanted to feel like we were hired to do the direct sequel to the original film. So in terms of look, feel, and tone, that’s what we’re shooting for. It’s very much a team book and we’ve got all the main players here. Luke, Han, Leia, Chewie, the droids, and Darth Vader all get big moments in this first arc, and that’s our core cast going forward. I do want to be able to use Obi-Wan Kenobi. I’ve always liked the old Ben Kenobi version of Obi-Wan, so we will see him in some capacity."

"Story wise, I think our book is driven in some big way by Luke and by the pretty interesting spot we find him in at this period in the timeline. You look at the gap between Episodes IV and V and there’s quite a bit that happens off screen that we get to explore. I’m really excited by the fact that Luke is in this position where he’s still a guy who’s just fresh off the farm. This is all pretty new to him. His world has changed completely. He had this mentor for five minutes who now is dead and leaves him with all these questions about his father, about his history, and where he goes from here, and what’s his role in the grand scheme of things. I think Luke already can see that clearly there’s something special about him. He was able to blow up the Death Star and do this amazing thing, but he has no idea where to go from here. He still has a ways to go before Ben whispers in his ear and says, “Hey, maybe you should see this guy Yoda.” So it’s an interesting time for Luke. He’s on this journey of discovery by himself, and he wants to find out more about his father. Meanwhile, Darth Vader’s chasing after him trying to find out who’s this guy that blew up the Death Star. I like the fact that they’re kind of chasing each other, without realizing the full implication of what they’re chasing. Luke’s chasing after his dad while running away from Vader. There’s a lot of cool big beats in that gap that we get to grab and lay down as part of the canon." 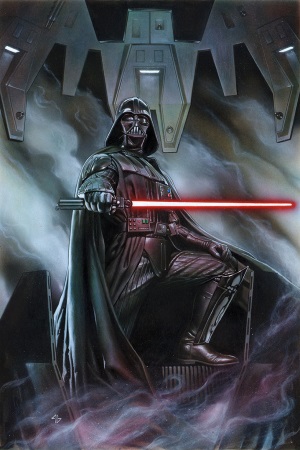 Next up in the list of comics is something that will resonate well with all of us Dark Jedi... Star Wars: Darth Vader. Focusing on the specific story of Vader in the aftermath of the Yavin IV Disaster, this series will deal with all things Vader, the power struggle between Master and Apprentice, and lots of other angles which will hopefully shine more light on our favourite bad guy.

Here's what author Kieron Gillen has to say about the series: "The high-level concept is that it picks up very shortly after the destruction of the Death Star. Vader is the sole survivor of the greatest military disaster of all time. A disaster he isn’t entirely to blame for, but at least some of the blame is his. He completely let the Rebels escape with the plans. So this kind of comes back to him. So there’s an implied sense that Vader might not be in the Emperor’s best graces at this point in the story."

"The weird thing is, when you look at him at the start of Empire, he’s actually in a far more dominant position than he was at the end of Star Wars." 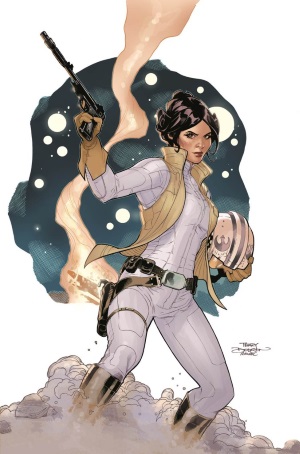 Finally up is the series focusing on everyone's favourite Rebel Princess (though I'm not entirely too sure there are many other Rebel Princesses out there. This one is a bit of an interesting series, delving into the emotional maelstrom that Leia goes through after dealing with Alderaan going boom boom.

Anyways, author Mark Waid explains it like this.. "Basically, the nugget of the idea I seized on is — once the Death Star is defeated, once all the adrenaline dies down, once all the medals are given out and Leia gets a chance to take a half step back — the emotional impact of losing absolutely everything you know, everything about your culture, everything about your family, all in one fell swoop. That’s something we just don’t have the time to deal with in Episode IV and V. That, I find really captivating, because that’s got to be the lowest moment in her entire life and a character is really defined by how they react in the lowest moment of their life. In this case, she has to actively choose: Will I be princess of nothing, and sort of just ride along in the Rebel Alliance and subsume myself to them, or is there a responsibility that comes with the title of Princess even though there are no subjects or royal house anymore."

"It doesn’t take but two minutes of screen time to pretty much demonstrate to you that Leia is clearly one of those people who was born 20 years old. You know? That she clearly had and still has a very strong sense of responsibility. It’s so obvious from everything she says and does. So, our story is about Leia not long after the end of Episode IV deciding, “Well, as the princess, there are still responsibilities that fall to me, like making contact with any stray Alderaanians out there who may not know what happened. It is my job as princess to deliver the bad news. It is my job to bring those who survived by being in other places, together. It is my job to help preserve some sort of cultural heritage of my people, so that everything my planet stood for and everything my people stood for doesn’t get forgotten.” So it’s a five-issue story [arc] that takes her across the galaxy in search of others of her kind to try and pull them together. Of course, some of them are going to be suspect, because they suspect this could be some sort of weird trap by the Empire. Some of them are going to be very angry, as they rightly or wrongly blame the house of Organa for what happened. Obviously, Leia will be traveling as low profile as she possibly can. If and when the Empire gets wind of the fact that Leia is doing is this, they’re going to be very interested themselves in what she’s doing, what she thinks she’s doing, and what information there is to be mined from these people."

Anyways, I'm really interested to see how everything works out with these series. You can read the full article and see more artwork here.