A tall Umbaran cyborg male who stands at six and a half feet with a perfectly smooth complexion, like most of his species Nihlus' frame is lithe. His skin is a bright pale color, with Vexrii's face and body both devoid of any hair. He has sunken eye-sockets and brows cracked with heavy usage of Sith Alchemy, eyes a set of obsidian pupils conquered by crimson-red irises.

The lower half of his jaw has been separated by lightsaber, necessitating an uncomfortable cybernetic apparatus to breath and speak. Extensive cybernetics have also been integrated into Nihlus' body, with the entire upper left portion of his chest and left arm cybernetic as well. 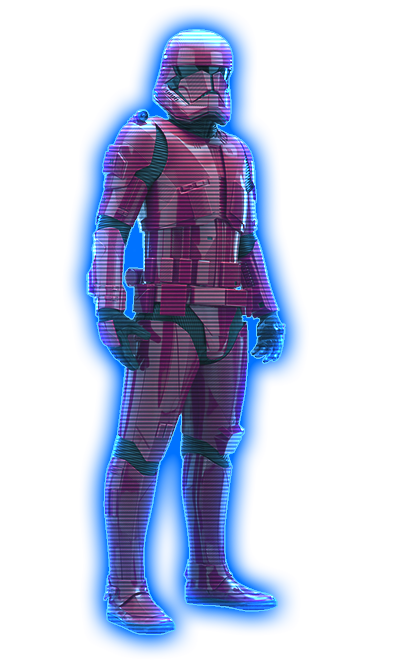 Lightsaber is a hand-forged long-handle lightsaber constructed during the Dark Ages. The top of the weapon begins with the jagged edges of obsidian as well as dark, silver, and red chrome that shroud the emitter matrix. The main shaft of the weapon is comprised of a slim textured cylinder flanked with various chrome accents, a two-piece activation switch with a faint internal crimson glow sitting above the matte-black textured grip. At the base of the weapon lies a jagged obsidian pommel and more chrome accents. When activated, a royal amethyst blade roars to life.

The Brotherhood-issued Inquisitorius Stiletto is a weapon that appears to be nothing more than a typical, slender dagger. Upon thumbing a small activator stub on the hilt, however, a sharp and nearly invisible monomolecular blade springs from the tip. This makes the stiletto perfect for penetrating armor in weak points and is deadly as a stabbing weapon in its own right. The blade itself is incredibly brittle, however, and will buckle under impact against even a basic vibroblade. Perfect for a quick and quiet kill, but not as useful in a fight.

Inquisitorius Stiletto has been coated with a poison that can interfere with the body’s motor functions by targeting the muscles and nervous system. The affects can vary from the numbing, paralysis, or slowing of limbs to halting breathing and inducing seizures or sleep. The poison triggers on contact with the skin or bloodstream, with the most severe symptoms manifesting in the immediate area of the wound. Requires the "Poison Weapons Feat" on the Character Sheets to be effective in combat.

The Utility Belt is a waist worn device fitted with equipment for carrying out basic mechanical tasks or other essentials depending on the mission.

The Glowrod is a handheld device featuring a powerful light at one end of a cylindrical tube. They can be used to help illuminate things in the dark with a focused beam of light in the direction they are pointed.

The Cybernetic is a technological replacement of an organic body part or parts.

The Tailored Brotherhood Robes are attire available only to those who have earned custom tailored robes designed as a mark of their own legacy within the Brotherhood. It consists of attire designed by the Herald of the Brotherhood with your own style.

Ancient Regalia's viewplate has been programmed with a custom heads-up-display to interface directly with a standalone datapad or datacard, providing the user with access to the information and features of the connected device. A full suit readout appears on the H.U.D. and while accessing or communicating with another device, the display can be susceptible to hacking by others.

This regalia resembles the chrome armor worn by Sith soldiers of the Dark Ages, only it is a dark silver-grey in color thanks to a Cerakote-alloy paint coating and the helmet is somewhat enlarged. It is a polished alloy exoskeleton of sharp and pronounced lines that consists of a fully-enclosed helm featuring a full-view face plate visor, shoulder pauldrons, vambrace-length gauntlets, a cuirass and partial plackart, integrated belt, protective tassets, knee guards, and full length boots that sit above a matte black body-glove as represented in this image.

The full-view helmet visor is black when faced directly, but is dark crimson when viewed at other angles. Across the surface of the armor plating are Ancient Sith runes etched very lightly into various places.

Ancient Regalia provides moderate protection. It can withstand cuts and blows but will buckle against the heavy blunt force of 2-3 direct strikes from bladed weapons. Glancing hits from blasters and slugthrowers are mitigated.

Ancient Regalia has been fitted with a body glove near the skin that moves moisture away from the skin and keeps Nihlus Vexrii dry, helping to keep them more comfortable. This glove makes it impossible to further alter this Tailored Brotherhood Robes to provide additional protections.

The Pyramidal Holocron is a vibrant, pyramid-shaped holocron containing vast depths of knowledge as well as the complete history of the Shadow Academy Society that can only be activated and used through the power of the Force. Data playback takes the form of any number of past Headmasters of the Shadow Academy.

The Inquisitorius Access Disk is a small disk with high-level encryption algorithms necessary to access and store information on the Inquisitorius network. This encryption key is unique to this disk and tightly controlled by the Inquisitorius, where the level of access granted if at all and when it's used all carefully tracked for the tightest security.

My Destiny... Is My Own. (General Aspect)

Some have the belief that the Force is the guiding principle in the galaxy, a power that creates and changes people's destinies based on their standing and actions taken. Nihlus goes against this grain. This Umbaran does not conform to any norms, whether they be social, procedural, technical, or cultural, instead having formed the belief that he alone controls and forges his own destiny.

This freedom allows Nihlus to make choices, moral or otherwise, that others may find hard and not be held back by the notion that the Force does not will him so and therefore he cannot or will fail in his endeavors. Unfortunately, this belief system also forces the Sith to take more risks, sometimes putting himself or others in danger needlessly.

I Fancy Myself More Of A Sculptor (General Aspect)

Nihlus has worked tirelessly to attain the knowledge of Sith architects, sculptors, and engineers of all types to learn the best design and build practices that the dark side has to offer. He has emerged through this struggle with knowledge that drives the Umbaran constantly to modify and upgrade existing items - while pushing for the research and development of new-age Sith technologies.

Vexrii's pursuit of becoming a master of Sith engineering and sculpting within the Brotherhood has further soured and eroded his relationships with those around him. This forces him to conduct much of his work in the shadows and out of the spotlight, which in turn drives him to partially resent the nature of his work.

Nihlus' personality can only be described as icy, disciplined, and steel-like in his demeanor and interactions with others. He has built a hardened wall around his softer emotions. Vexrii is incredibly stubborn, believing his solution or answer to be the valid avenue of pursuit; with no room for errors or miscalculations on the part of others. He is ruthless in his tactics, devoid of mercy, and does not laugh.

The Sith is normally quiet, with conversations short and to the point; preferring to leave no room for interpretation of his words. He also has no qualms about using torture to accomplish his goals. These traits have served Nihlus well at protecting his mental state, but have left him known widely as someone downright dangerous to be around - no matter who you are.

During his time at the Holocron Center and Shadow Academy, Nihlus was exposed to a myriad of Sith knowledge. This led him to form a deep obsession with the teachings of Ancient Sith Magic, Sith Alchemy and Mechu-Deru as a skill to be mastered and learned, although he does not adhere to the Sith ways.

Vexrii's obsession runs particularly deep with imbuing these Ancient Sith powers into technology, and can often be found conducting research or tinkering with technical processes most would find unnatural and unnerving - leading to people to steer clear of this alchemist altogether.

Nihlus Vexrii is unconcerned with collateral damage, rules of engagement, or the politics of the battle. He is coldly detached from those around him - even during times of high stress or combat. He shows little to no external emotion, instead allowing them to boil beneath the skin and fuel his powers.

Vexrii makes use of the Force in creative ways, mixing his abilities with Telekinesis and Mechu-Deru to bend technology to his will or outright destroy it. With no qualms about ending the life of a lesser being who has crossed him, very few enemies are spared Nihus' blade and even fewer allies feel comfortable fighting under him for fear of becoming expendable to this cyborg.

Nihlus utilizes his mastery knowledge of the Djem-So lightsaber form in unorthodox ways, utilizing his ambidextrous hands to take full advantage of his lightsaber as his primary form of combat. This Umbaran seeks to dominate and overwhelm his opponent through striking from wide, odd angles and deceptive stances, using his weapon to his advantage and ignoring standardized lightsaber combat sequences.

With the incorporation of the Juyo lightsaber form into his primary fighting style Vexrii's movements have become not only more aggressive and unpredictable, but relentless as well - his mind surrendering to battle . This unpredictability prevents Nihlus Vexrii from knowing where his body may take him, seriously diminishing his ability to form a defensive strategy against a Jedi opponent.