If you have Star Wars news to report, drop me a line.

Warbanner Request Guides are about 2/5ths done. Go check them out.

Warbanner Gallery has also been started. Take a look at that while you're there.

going to hammer out all of those. We have started contacting current GoA holders on updating to the new Standard. The replacement info is coming in very slowly, so I may just start picking people at random.

We're eager to get those old images off the site, especially since we aren't supposed to be using them anymore!

Also, just to clarify a misconception, I know BEND and BEND SINISTER are Left and Right, not White and Black. Do not accept the Rebirth preview information

as a final draft. This error was not mine but was corrected.

"Carrie [Fisher]'s playing Pauline Kahn, the no-nonsense editor-in-chief of the "Daily Planet" whom Chloe (Allison Mack) meets in hopes of landing an

There will be three "new" Commemorative Episode III DVD Collections coming out this fall, each with a different theme. Look for 3-pack sets focusing on the

Clone Troopers, Jedi Knights, and Sith Lords. All the figures are repacks, but the Clones are also repaints.

Backstroke Of The West

Though I think I covered this once before, I've been asked to bring it up. [Check this site out](http://americaninlebanon.blogspot.com/2005/07/backstroke-of- 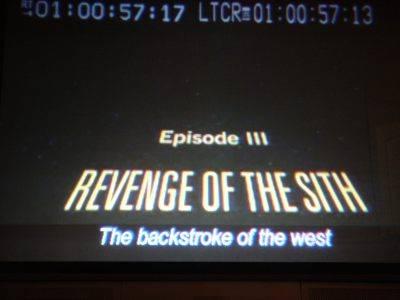 will feature a new planet, Mustafar, as well as over 50 new quests.
It will be available for download the same day Episode III comes out on DVD, November

The War Rages On

preview/review of Empire At War. Be sure to take a look at all those screenshots!

You made it to the end! Congrats. Me too.

The past two weeks have been filled with a lot of chasing. I've been trying to contact people about replacing their GoA. It needs to be done, and I need as

much from people as I can get. I've also been chasing people about a lot of things - in Real Life and online. Seems like everyone is just busy!

Hey, for reading this far you get a special treat... Little Known Star Wars Fact #50: In a deleted Scene from TESB, IG-88 tracks the Falcon to Cloud

City but is destroyed. His remains are visible near the smelter when Chewie rescues the dismantled C-3P0 from the Ugnaughts.

And all this time I just assumed it was another droid that looked the same...

Oh and if you want to have some sort of morbid fun, check out Death By Caffeine.

According to the site, yours truly "could drink 183.36 bottles of Bawls before croaking." If they mean all at once, I have 180 to go.

You know... when I built those banners, I knew bend and sinister where left and right, but I made it black and white for a reason. We're a SW club, this isn't real life and it made more sense this way.

Either way. Whatever floats your boat.

Dexter and Sinister are Left and Right.