Between Light and Dark Prologue

Between Light and Dark Prologue 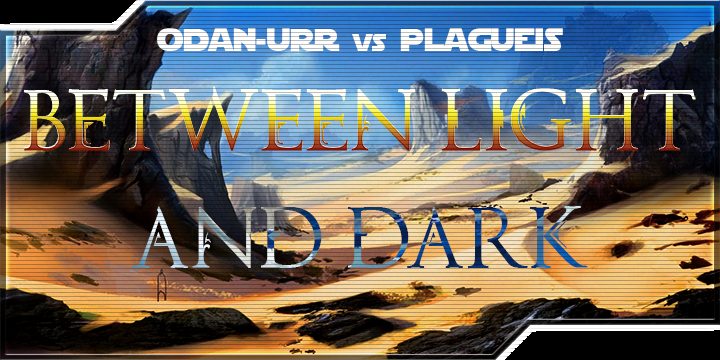 Find the fiction on the forums here!

Ever since the Brotherhood left this forsaken planet with little more than a handful of outposts to manage the colonies, times have been hard. Freighters no longer made regular shipments; instead, the Brotherhood’s soldiers stationed behind crumbling walls scoured the deciduous forests in search of whatever was needed to protect themselves from potential threats—leftover caches of weapons, power cells and basic tools from the Sith Empire of old. Even so, the outposts were forgotten—or so it seemed.

News travelled slowly to the surface; communications were limited to rudimentary arrays that passed information to other stations from a central hub. In the time it took for word of Darth Pravus’ call to have ‘undesirables’ eradicated, his legions had begun to set course for the backwater planet. Most of those stationed in the outposts and surrounding colonies were an affront to Pravus new order—Arkanians, Barabels and Verpine among them.

“Get me those power converters! Without those, we might as well shut down our turbolasers and clap binders around our wrists. Do we want them to find our heads buried in the dirt?” one of the Verpine chattered, elbow-deep in what was once a functional shield generator.

Trading his given name for that of Thrax Kolzaar, a maintenance officer stationed on Athiss, the Arkanian pulled one of the components from amidst the pile of dissimilar devices. Among loose cables, tibanna gas canisters and other assorted parts, it was a wonder the outpost remained functional for this long.

Fingers traced darkened bands through the outpost; triangular shadows blanketing the planet’s surface from vessels passing ahead of the system’s star—all bearing the mark of Plagueis.

Meteorites of green plasma thundered through the atmosphere, pounding craters along the horizon. From his vantage overlooking the outpost’s defenses, Thrax caught the last glimpse of what had once been a shelter housing hundreds of Barabels.

Switches flicked inside of Thrax’s head, instinct from training taking over his judgement of the situation. His first objective was fundamental: Send coordinates to the Sentinel Network for rescue. He didn’t have time to send the cipher ahead of the message, but Arkania be damned if Plagueis arrived ahead of the Odan-Urr fleet.

“Where are you going?” buzzed the mechanic, “I still need those converters!”

Followed with a stream of alien curses, Thrax was gone. Boots against duracrete raced against the oncoming tide of orbital bombardment drawing closer. He wanted—no, needed—to transmit the message before Plagueis could ever know it was sent to their mortal enemies. The door’s lock buckled under the pressure of his shoulder, metallic fragments skidding along the grated floor. Standard-issue chairs and desks were thrown aside in his wake. Deft fingers found the mechanical keys and went to work on the message.

“Fifteen seconds.” His teeth gritted in knowing that this was his final moment. Coordinates were to be sent to the neighbouring outposts and after, transmitted direct to the Odan-Urr Sentinel Network.

He miscalculated. Fifteen seconds was not enough.

Cold sweat settled on his forehead, rolling into the collar of his uniform. Unnatural, the feeling was unlike all others he had experienced—in war, on the brink of death. Pure, unbecoming fear pulled at his heartstrings and played on his emotions like a lute. Words were out of his reach, the final keystroke barely registered under his trembling fingertips.

All he could feel was despair, but all he could see was beauty; a malignant attraction to the gorgeous but toxic enchantress now standing a hair’s breath from his face. Her breath was warm on his cheeks, but still managed to form beads on his forehead. Painted lips formed a devilish smile, drawing closer to his ear.

“You’re going to tell me where that message was sent, and how to decode it.”

Who was this woman?

“Selika Roh,” his mind clicked, “there’s nothing anyone can do to make me divulge that information. Get on with it, kill me.”

Abashed, she mocked disappointment, “Oh, and ruin the fun? We’re going to have such a great time.” Pulling his ear to her mouth again, she whispered in what could be mistaken as a sensual purr, “I so love my playthings; It’s a shame none of them survive. Talk fast, and you might be the first.”

The Prologue we have all been waiting for is released. A classic clash between good and evil, this feud was made through the combined efforts of Clans Odan-Urr and Plagueis, through their respective Consuls and Proconsuls. This has been a long time in the making, but we were determined to do this right. This is the first feud the Brotherhood has seen in a long time; therefore, we will be setting the stage for future events of similar nature as we wage war between our Clans as rivals.

Comprised of three phases, this event has a Prologue phase and two regular phases of competitions, with two competitions running the length of the event from the second phase to the end of the third phase. The Prologue itself will be run for one week while the two “main” phases will be run for two weeks each, with a week-long break between them. An introduction, this prologue will introduce you to the start of the conflict between our Clans—with a catch. A single competition will determine which of the Clans arrive first to the field of battle. Win, and determine the route that this event will take (of two possible fictions!)

Our timeline is as follows:

Moments before Plagueis’ forces chased the undesirables from Athiss, a set of coordinates was transferred to the Sentinel Network with rudimentary encryptions. Time is of the essence, with Plagueis in pursuit to eradicate the fleeing vessels and Odan-Urr determined to dispatch rescue ahead of Plagueis’ fleet.

Decode the message accurately in record time. Subscribing to the competition will unlock the puzzle and begin the timer to complete the objective. Enter the solution in the submission text field. Do NOT share this puzzle with anyone else in either Plagueis or Odan Urr to give them an advantage.

Interesting start. I can't wait for to see where this goes!

YES the waiting is over !!! Great starter fiction too!! Lets do this and lets have some fun!

Good luck to everyone! This should be fun.

Good luck, everyone. And most importantly, have fun.

Special props to Teylas, Selika, A'lora and Mav for helping to put this together. Best of luck to all! Have fun!

Best of luck everyone, time to bring it

Oooooh who made the graphic? It looks great! ALso yey finally! I feel like we've been trying to do this since I was AED in 2014!

Good luck to all participants! Can't wait for this to really get going

Best of luck to everyone from Plagueis and Odan-Urr!

Good luck and have fun!

Excitement. Hope both you lot rock the event and have tons of fun!

Good luck to everyone in both clans. Remember, the point of this is to have FUN!

Fun is over-- I mean yeah let's have fun