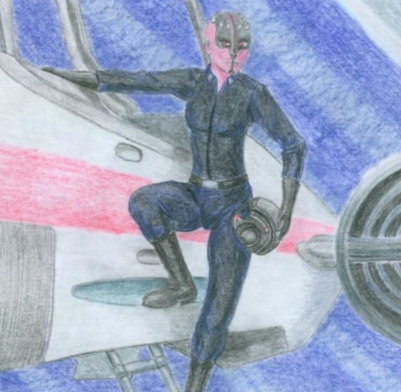 The remaining Collective officers, soldiers, and crew members hustled as they prepared to evacuate the capital. The engines of an escape shuttle hummed in harmony to the escort vehicles going through their final check-ins. Rose Squadron had been called back from the front lines after the Brotherhood had destroyed the Braga and punched through to the planet’s surface.

Emery Rose tapped her foot impatiently as she idled on the ladder of her X-Wing, anxious to get back into the air where she knew she had no equal. The pink-skinned Zabrak wrinkled her nose. She had been impressed with the Brotherhood’s roster of pilots, but had yet to have her streak of successful dogfights challenged.

Below, Field Commander Ghafa Ordam was repremadning Kendra Icasta for her failure at capturing the downed Brotherhood fighter. Emery did not bother to hide a smug, lazy grin at seeing the Shikari leader having her ego checked.

“Ma’am, you have to understand,” Kendra was explaining as she grit her teeth in frustration. “He had to be one of their Elders. My huntress are good, but with that kind of power...”

“If he had not made it back to the Plagueians' camp, we could have taken him—”

“—and yet, you failed to do so.” Ghafa glanced down at her datapad and tapped a quick response to a message. “Help Drake and the others with the evacuation. We’ll discuss the ramifications of this later.”

Kendra bit back her retort and nodded once. “Yes, ma’am,” she said as she turned to join the other Technocrats, passing one of her colleagues in the process.

Kerwin Drake hid his fatigue well, the plethora of new scars and bruises stretching across his body a testament to taking on some of the Brotherhood’s top warriors and living to fight another day. The brute of a Devonarian seemed to be holding up after repeated encounters with members of the Brotherhood on the ground. Especially as he helped two small children climb up onto one of the shuttles.

“But Papa,” the smallest protested. “Aren’t you coming with us?”

“I will be along as soon as I make sure the others are clear. For now, I need you to keep your sister safe for me. Can you do that?”

The little Devonarian bobbed his head slowly a few times, his tiny horns mirroring the contours of his father's. Kerwin smiled and held out his fist, which his son met with his own. As he turned to walk away from the shuttle, a slender woman with long raven hair and violet eyes fell into step beside him and looked at him expectantly.

Elsewhere in the hangar, Daggo Mouk grumbled at the series of datapads in both his organic hands as well as the mechanical one. The Ithorian turned to the Collective leader and repeated his concerns once again.

“For the last time, Rath Oligard,” Daggo always said Rath’s full name when addressing him, no matter the situation, “are you absolutely assured about this course of action?”

Rath Oligard stood poised with both hands behind his back. His strong features and broad shoulders showed no signs of weariness despite having barely any time to sleep in the long campaign.

“We stick to the plan,” Rath replied firmly. “I want all of your factories and facilities detonated and destroyed. Leave nothing for them to salvage, and take as many of their forces out in the aftermath as you can.”

The idea of this fiction was to touch more on what the Collective was doing in reaction to the Brotherhoods victory against them. This features the NPCs you, as writers, encountered throughout the war. I tried to make faint tie ins to some of the themes and story blips I read, so hopefully this is somewhat of a payoff for those of you that really dug into the Collective personalities.

Chapter 6 - Finale, is up next. This is a longer piece — clocking in around 14 pages — and features and focuses on the seven war heros, and the closing act of the battle on Nancora.

Sarin will follow this up with an “Epilogue”. That will look to address a lot of questions members have about how the Brotherhood’s main storyline will function going forward. I can’t say much else right now, but expect these fictions to roll out this week. The finale is complete and fully written, and just going through some extra proof-passes and checking with character authors for authenticity in their representation.

Don’t forget, The Collective Chronicles are still ongoing. There are 4 really easy competitions to do, and they give you the chance to create characters that will become a part of the Collective. This means they will have chances to be used in fictions. The winning character(s) will be featured in fiction in some manner.

Seriously guys, this competition is designed for you. I’ve got ~7 entries for each category, but know we can get more. The more characters we get, the more the Collective will feel like something you the members helped create. Otherwise, it’s just me coming up with my own characters I come up with on the train.

Thanks for the update Wally! Appreciated by all!

This wasn't exactly the fiction I am waiting for but....I do love getting more details though so this should help sate me a bit before the next chapter and Epilogue... :D

Very interested about the POWs and awaiting the next fiction!

Force using prisoners of war. Ouch. I do not want to know what's going to happen to them.

A great read. I'm excited for what's to come.

Jac already glassed our homeworld. The joke is on you Collective buffoon, Taldryan doesn't HAVE a home to surround. Muahahahahahaha!