It's been awhile since my last report, so I have a few things to cover this time around. Chief among them are the addition of owned NPCs to the Brotherhood and an opening on the Wiki staff. So, let's dig in! Also I was hoping not to end up posting back to back with my Clan report, but apparently only CSP posted any news today. So, unless you're in the Clan or have your news page filters set to "READ ALL THE THINGS!", you get a double dose of me. Muahaahaa!

Probably the biggest change to the Brotherhood in recent months has been the addition of owned NPCs and alternate characters into the character sheet system/possessions. As such, I've fielded a few questions about how to manage DJBWiki articles for those characters, and I've mulled over a few scenarios on how they should be implemented. At first I thought about just making them all designated as NPCs on the character template and categorization, saving the various order tags on character templates for those characters that corresponded to dossiers. However, seeing how the alternate character system has evolved, such as support for them in ACC venues and the like, I decided that limiting these characters only to the NPC designation on the wiki would be doing them a disservice.

Alternate characters can be identified via the character template with the various order designations (Sith, Jedi, Loyalist, Mercenary, Gray). They can also, at the discretion of the member, be categorized in unit member categories (where appropriate) or Rogues instead of as NPCs. All owned NPCs that are '''not''' classified as alternate characters must be marked as NPCs on their character template and assigned to the relevant NPC category. 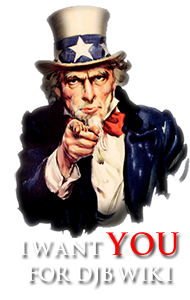 I once again come before you all to announce that there is a single place on the DJB Wiki Staff now open for applications. This position is an excellent way to develop skills and a portfolio of work that look great as you move forward in the Brotherhood, and can help spruce up medal or promo recommendations when your Clan leaders get down to writing them. Additionally, it's a good introduction into the task oriented side of the Brotherhood (the land of ACC Judges, Magistrates, etc) that isn't quite as rigorous as those other areas. It is, in essence, a great entry level post to get your foot in the door of Brotherhood leadership. Don't be scared by the job!

Some of the duties I’ll be specifically tasking the new staffer with include, but are not limited to:

In addition to the above, I would be interested in someone who is familiar with HTML/CSS/Wiki formatting in order to address the HTML replacement project as well. If you have those skills, be sure to let me know, as they can make you stand out from the crowd.

Applications will be open until Saturday, June 17th. Please send an email to me with the subject "Wiki Staff Application" and outline your experience and any examples of your work (either on our wiki or elsewhere). I would prefer that applicants have passed at least the Wiki Basics course if not Wiki Editing as well, but exceptions to that will be made for the right candidate. There is no minimum rank requirement, but familiarity with the Brotherhood and the Wiki is a plus.

Featured Articles & Wikipedian of the Month

This month’s featured article is the new homeworld of the Imperial Clan: Seraph. This article is a great planetary article, chock full of excellent and detailed information. More importantly it is a stellar example to illustrate the saying "a picture is worth a thousand words". The original images used to illustrate the article really make it stand out.

As for our Wikipedian of the Month, this month's selection (who is related to the Featured Article somewhat) has been a mad whirlwind of activity making both major updates to his Clan's canon as well as a massive number of bookkeeping edits as well: Xen'Mordin Palpatine. Oftentimes when major Clan canon updates happen, it's months (if not years) before the wiki presence catches up. Xen, however, has done an excellent job making updates to CSP's wiki footprint now that everything you know about CSP has gone and changed. Keep up the good work!

Monthly Reminder: The wiki staff as a whole is always here to give you a hand with wiki questions. Hit us up on telegram (many of us are on there often/always/too much), and even if the staffer you catch doesn’t know the answer they’ll track me down and make sure you get an answer. We’re there to help you guys out, so don’t hesitate!

Pick me! Pick me coach!

Oooh, lovely new templates and links and such, glad to see things updated for NPC love. Thanks all staff. <3

Apply all the things.