Finally, all three of these platforms are starting an Event on the same day! This makes my weekly competition creation much simpler, and its even conveniently occurring on the day before I have family coming to town to visit. I must have had some good karma saved up.

Tomorrow this Event will begin. Although there's little in the way of details available for it yet, I expect it will be a mission based event and not a Tournament. The associated competition has been set up based on that. In the event of a massive change and it turning into a tournament... expect the competition to be adjusted accordingly.

Again, starting up tomorrow. Another competition put together based on the mission based event model. Typically there's "Tournament" somewhere in the name when its the PVP version. Same deal as the previous event. 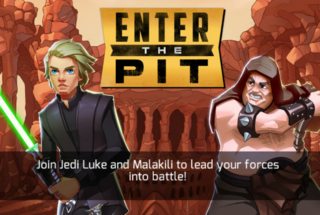 This event started up earlier today. The Event Reward Champion is Malakili, and his special move is to summon a young Rancor to help him fight. This is an arena style event. The Dark Side Event Champion is Boba Fett (the standard Durasteel pod champion) and the Light Side Event Champion is Jedi Luke (special for this event). Boba has a rocket barrage super, and Luke has a slowing aura move. Both champions get five times the health and damage while in the arena.