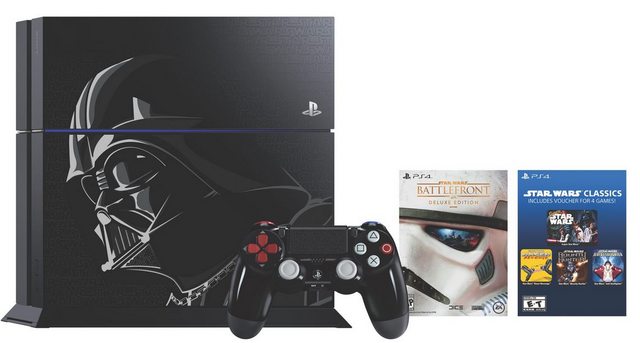 Do you want one of those for free? Of course you do (unless your Wally). About three hours ago at D23 EA Star Wars announced a sweepstakes where two people will win one of these bundles. Entry to win is simple. Just follow @EAStarWars on Twitter, tweet them what excites you the most about Star Wars Battlefront and include #SWBattlefrontPS4 and #EASweepstakes in your tweet. All tweets without the official entry hashtags will not be considered entries for this sweepstakes. This giveaway is only available for residents of the U.S. and Canada (excluding Quebec) and winners will be randomly drawn from all tweets entered. Only one tweet entry per Twitter account and multiple tweets will not increase your chances to win.

For full details check out the News Post they put up.

There's also a separate news post they have with details on the Battlefront Playstation 4 Bundle (Not a Limited Edition Darth Vader epic console though). 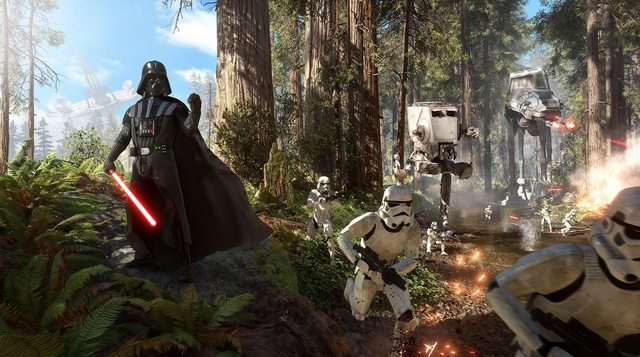 This week EA Star Wars announced another multiplayer mode for the upcoming Star Wars Battlefront game, Supremacy. This is a capture and hold style mode with five objective points across the map, the goal is to capture all five or hold the majority of them before the 10 minute round completes. This mode incorporates ground troops, vehicles, Heroes and Villains in the fight, as well as starfighters. Check out the post on the Battlefront website for additional details, including some tips on what activities certain Heroes may be better suited to and some information on an Ewok Village you can occupy on the Endor map for this mode.

EA Star Wars also posted a summary of their Twitter Q&A from Gamescom. Some highlights are:

The Fist-o-Matic is a bot which will remain in the DBGaming channel and run 24/7. It will assist in matchmaking people based on when they joined a games que and what other members they're already played against that day. A day is based on UTC, just like the website, and is reset at midnight UTC.

We are not currently requiring use of the Fist-o-Matic. However, expect to see it being required during future high profile events (like a GJW) to minimize match dodging issues.

When people join the channel and are not logged in, they are greeted by the bot, telling them to use the !login command for instructions on how to log in.

The bot will match up people queued up for a game that have not played each other that day for that queue. Matchups are announced in the channel. Once matched up, players have five minutes to confirm, or they will be kicked for idling. If both confirm within the time limit, the match is started, and the !report commands become available:

This bot was something that James had begun working on back in March, based on a high level goal and a wishlist from Pravus and me. It went through several iterations and a more than a few rounds of scope creep, but as always James pulled through on it like a pro and we've got another awesome tool for our members. Please take some time to thanks James for programming this bot, without him it would not have been possible.

DB Gamers have a fever, and the only cure for it is MOAR TELEGRAM!

I've mentioned this in a few of my recent reports, but Telegram has been quickly becoming a popular way to chat within the club, especially for the gamers. Over the course of this past week a few Telegram channels specific to individual games have popped up. So I spoke to their creators, got group join links, and created any channels for games which weren't out there yet. Here's the rundown:

Expect to see any and everything related to those games, upcoming patches/changes, or people looking for groups for them in the chat. Feel free to join the ones you have interest in, and ignore the rest. All Telegram Channel Join links will be included at the bottom of my reports for future reference as well.

Over the past few weeks I've been in discussions with some of the members who play the Star Conflict Game. One of the main items that has come up was how to reward the PVE matches that are available to be played in this space flight simulator that has had growing popularity among our members. After collecting some data around time to complete these matches, as well as revisiting the information around Star Conflict PVP missions we'll be making the following changes:

The Gaming Portal will be updated to reflect these shortly after this report is posted.

An Invitation from the Star Conflict DJB Corporation

The members of the DJB Corporation in Star Conflict invite you to join them! Star Conflict is a free-to-play game (check it out on Steam). It provides you the unique ability to fly with some of the Brotherhood's pilots in both PVP and PVE missions. As you complete missions, you collect points to power up a diverse selection of new and powerful ships. Participation counts towards regular, weekly competitions with the ability to haul in both Clusters and Crescents.

If you are interested in joining this group of gamers, be sure to reach out to Landon Cruise. You can also [join the Star Conflict Pilot's Lounge on Telegram - Log in to view join link] or join fellow gamers in #dbgaming on IRC. Star Conflict can be played any day or time, but members will be grouping on the following nights to do 4-man squadrons:

Based on the positive feedback related to changing how larger Operations are rewarded later today the bonus associated with performing a 16 person Operation will be dropped and replaced with the following modifiers. These will affect both Flashpoints and Operations:

The Gaming Portal will be updated to reflect this shortly after this report is posted.

Starting 22Mar2015 the Weekly PoB has been awarded for matches from Sunday to Friday. A second PoB will be awarded for Saturday matches, consider this a "Gaming Day". Time will be based on GMT just like competitions, so Friday at 7pm EST the "Gaming Day" will begin and conclude at 7pm EST Saturday. Following completion of the Gaming Nights project this may change back to a Sunday-Saturday one per week reward. The wiki has not been updated with this new schedule for that reason.

And now, some Crescents for gamers:

Looks really great!!! And can I just say ... stupid competitions, why do you have to be American to win free loot!!! shakes his fist with rage

(Some) Canadians can win too though!

Yeah, not sure. Seemed kind of silly to me too. I'm sure there's some crazy legal reason or something.

Dark Jedi Knight Kaiburr said: Looks really great!!! And can I just say ... stupid competitions, why do you have to be American to win free loot!!! shakes his fist with rage

Well, in the case of Quebec, the laws prevent competitions of the sort if things are not in French (the province also has a bunch of rules the industry doesn't want to even play with), so that excludes them. As to its availability in other countries, I would imagine that it must be a regions coding thing..? Maybe EA Germany (if there is one), will be hosting something, etc, etc.

Question on the Star Conflict custom battles. How can you do PVE only? I thought you could only set up a custom battle between players for that one, not AI.

Regarding competitions, it takes a lot of legal legwork to make sure your sweepstakes are compliant with the rules of any given nation - which means lawyers, which means money. So most of the time, they just do it for the areas where their largest user base is, because it's not financially viable to do it elsewhere.

Love the SC stuff. Excited to get home from vacation to play (no, not really... I'm enjoying the lake).

Calindra - thanks for that. I had meant to look that up the other day while driving into Quebec after some random conversation came up with my Kiwi brother-in-law. Not terribly surprised it stems from the language laws.

Include a mention of @SWDJB in your tweets to EA, and we'll retweet you! (Not sure if it helps your chances or not, but it can't hurt to advertise how excited we are as a club)

Only 4.5 hours left to enter for a chance to win the Vader PS4!

Been loving the bot, makes things much quicker and easier.