Selka’s eyes narrowed behind the quadnoculars she held to her face. The sheer cliffs upon which the CIS outpost stood rose up from the surrounding plains like a wall before her forces. The central tower was itself built into the cliff face, with what looked like a small starport facility seemingly huddled against the cliff face at the bottom.

“Of course the Dread Lord would chose the easier approach for himself,” said under her breath, an amused grin on her face. “With the target that offered the most glory.”

“What was that, my master?” Malice’s voice called up to her.

Selika looked down from where she stood atop the back of the AT-TE that was at the vanguard of her force marching across the plain. “Nothing of consequence.”

The younger woman nodded while patting her nexu atop the head as she marched along with the army, her own unit aligned in ranks behind her.

Suddenly the AT-TE’s on the flanks picked up speed, the columns of bipedal walkers and their accompanying infantry along with them. It appeared that Tra’an and Eiko were just as eager as Selika herself was to finally put an end to these last remaining holdouts. The twin columns moved forward, stretching out while seeming to form thrusting horns that sought to gore the enemy.

“Center group,” Selika called into her comm, “bring us to three-quarters speed. We can’t have the others make us look timid.”

A chorus of acknowledgements filled the channel, barely covering the amused chuckles of the two former Quaestors, one di Plagia and the other Revanite. As the AT-TE below her feet lurched forward as it picked up speed, the two flank groups began to exchange fire with the perimeter defenses that ringed the spaceport. Primitive field pieces, repeating blasters, and even hand weapons spat their red fire against the advancing Plagueis forces. Selika once again smiled, and turned to the gunner seated behind the projectile cannon.

“You may fire when ready,” she ordered.

The helmeted soldier nodded, and within a heartbeat the crack of the gun thundered as the battle was joined. 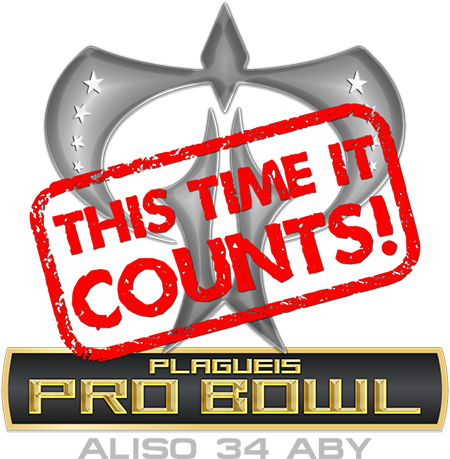 Once again a bit of a fiction update before we get to the meat of things, hope everyone is diggin’ it. You might notice from the title of this post and the logo above that something is “up” with the Pro Bowl. Unlike in most events where there’s nothing on the table but medals and bragging rights, this time around there’s a bit more on the table.

Below you’ll find five prize packages that are up for grabs in the upcoming Pro Bowl competition. Each of the top five individuals placement-wise will earn a choice of one of the five game bundles that are listed below. They will be selected in order of placement, and we think there are great games in each of the five bundles! So, go out there and fight for the glory of your team, but also for some of that awesome loot that’s there to be earned!

Very much looking forward to this :)

Wonder how many former members are salivating at these