The following is an excerpt from the final chapter in the events of Code: Dread written by Ronovi Tavisaen.

Kryso cursed under his breath. From the viewing portal, he watched the Black Silence weave in and out of buzzing swarms of ships - Task Force Besh, Collective, Principate, it was getting more difficult to tell the difference now. Leaning forward in his captain’s chair, the Chiss pushed his vessel into full throttle, lurching into the fray.

“We got the Wrath coming in hot!” Ohni cried out, watching the blips on the Scream’s radar. While Khryso had known that Plagueis would win the battle, he was pleased that TuQ’uan’s arrival would at least reduce casualties on the clan’s side. As the Eviscerater emerged unscathed from the conflict, the Knight keyed in a transmission to Abadeer.

“Sure am,” replied the Togruta, sounding out of breath. “Brimstone here helped me take out some sort of Raider II-class corvette. Is that the one Kel Zar’s in?”

“Nope. Sorry, buddy,” replied Khryso. Still, a nagging part of his Force senses told him that despite that, whomever they had fired down had been a rather valuable friend.

In the next few minutes, the Collective offensive would withdraw.

Mant Krafin, once a lively informant, was now bleeding and near vegetable status. Andrelious had done a number on him. The vengeful father had heard enough of the damned spy’s ramblings about the fate of his sons; now he had to suffer for even bringing them up in the first place. The information he had received, ultimately, was worrisome - a potential infiltration into the Pinnacle itself was underway.

Signaling to Lieutenant Grapik, a member of the Willing, Andrelious marched out of the interrogation room and made his way to the main turbolift, making sure to use the proper credentials to get to the Dread Lord’s office. In the aftermath of his report, he had expected a speedy response, but he had gotten none. This bothered the new member of the clan: Was Ronovi really so careless or nonchalant? What about the possibility of a demolition squad attacking Plagueis’s headquarters scream non-urgent to her?

He waited impatiently as the lift zipped up the remaining 94 floors, until the doors slid open and he was greeted by two guards. They inspected him, forced him to cede his blaster rifle, and only caved to letting him keep his lightsabers after he made good use of his mind trick prowess. While the Dread Lord, powerful as she was, had to take time to sway weak minds using the Force, Andrelious could get his way without so much as blinking.

When he entered the Dread Lord’s office, he was both surprised and disappointed to see that Wrathus and Tahiri, his so-called “superiors,” had beaten him to the punch. The Togruta and the white-haired Epicanthix flanked Ronovi at her desk, the near-half cyborg perusing a datapad with a smile. Once she set it down, she eyed the former Arconan cautiously, and Andrelious knew full that she was wary of him being here. After all, the man was not one to simply follow orders, and while he was technically now a Plagueian, he would not act like a rank-and-file yes man.

“You’re a bit late, Inahj,” opined the Consul. “Seems like your squad already had a go at the Pinnacle’s hangar bay.”

Andrelious’s eyebrows fluttered upward. “So fast? Good thing I filled you in, then.”

Ronovi waved her hand as if to dismiss his contribution, which irked him even more. “Not much to sneeze at. A few Aleena, some humanoids. Our Willing forces took them down quite efficiently.”

“Some damage to the bay itself,” Tahiri added, “but nothing we can’t fix.”

“I’m not calling them ‘assets,’ Tavisaen.”

With a sigh, Andrelious left the office and returned to the turbolift, a confused Grapik following him. Even if Ronovi hadn’t provided him credit, he had done his job, and perhaps she would thank him later. Unfortunately, despite being staunchly opposed to all facets of the Jedi Code, the Warlord would have to practice patience.

Welcome all to the spookiest report you’ll see!! (as long as you don’t leave this page…)

As most of you know, we here in Plagueis just finished up our three week event entitled Code: Dread where we got tired of being on the defensive and finally took the fight to those pesky Collective agents.

This was a team v team event with one team captained by myself and the other helmed by our Dread Lord Ronovi. It was...

In the end, it was a hard fought battle with Team Half-Cyborg edging out the Fancy Hats for the win! We want to thank everyone for helping us make it a successful event. Ronovi and I had a great time coming up with a slew of fun and challenging competitions that we had an absolute blast grading. Seriously, some of your raps were fantastic! I also want to thank Atra for helping Ronovi and I with the grading to help us remain impartial when it came to placements.

In the end, though, there were three participants who really blew us away with both their participation and their entries. Help me congratulate our top three placements.

Code: Dread - By The Numbers!

Over the three weeks of competition, Code: Dread brought in a total of 148 entries from 16 unique participants. Participation numbers on the individual competitions ranged from 14 submissions to only 1. 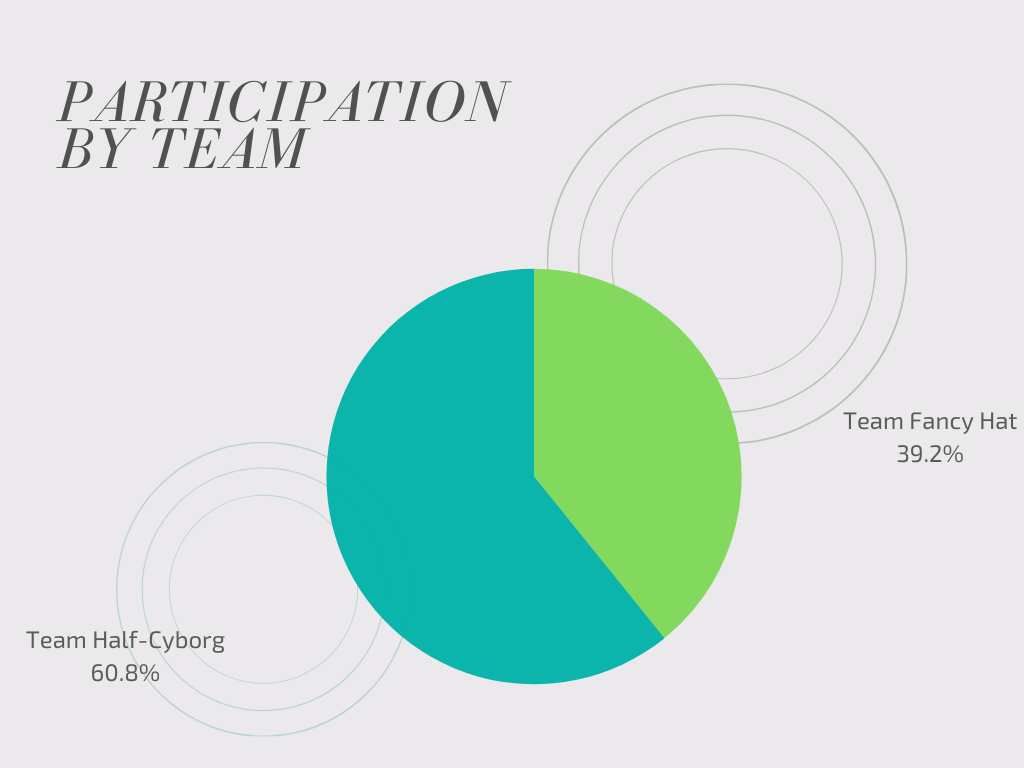 As you can see, Team Half-Cyborg really brought their A-game when it comes to participation submitting a whopping 90 entries compared to Team Fancy Hat’s 58 entries. While both teams fought and admirable fight, there could be only one winner. 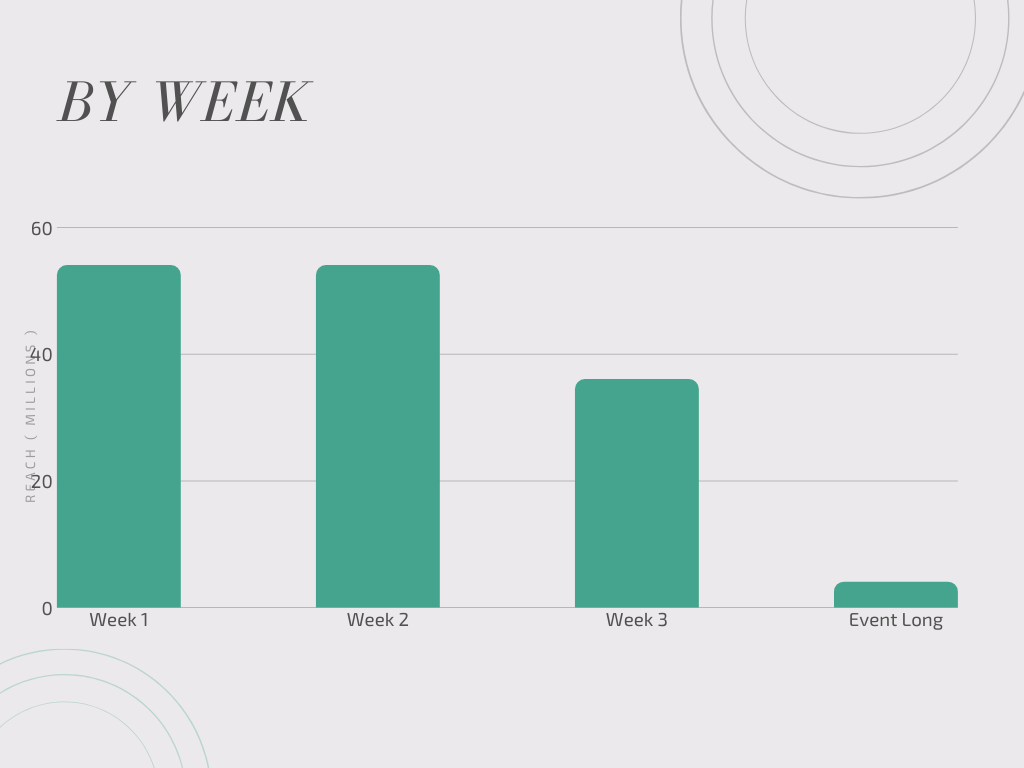 While Week 1 and 2 had an identical number of entries, we unfortunately had a drastic drop off in participation and we had only four people participate in the event long fiction. This is a little disappointing to see, but we have learned a lot from running our first event as a Consul/Proconsul team, and we are committed to bringing you more events in the future that we know you’ll enjoy.

Did you enjoy the unique competitions we came up with? Did you feel overwhelmed with the choices? If you have any feedback on Code: Dread, please feel free to reach out and let me know - we want to hear from you!

Halloween has always been a very important time for us here in Plagueis, not only is it the spookiest time of year, but it’s also a certain former Dread Lord’s birthday, and this year Ronovi wants to give you all a very special treat. Keep an eye on the competition page for a proper Plagueian celebration starting on the 31st!

Competitions Around The Club

Thank you again for everyone who participated in Code: Dread and giving me the pleasure of grading all of your incredible entries. For now, tide yourselves over until November 12th with the newest Mandalorian trailer (I may have fanboyed a lot….) and we’ll see you on Halloween!

As always, if anyone would like to reach out for any reason, I can be found on [Telegram - Log in to view join link] (if you’re not on Telegram yet, I’d highly recommend it. It’s free and our primary form of communication) and by e-mail with very little delay.

Congrats again to everyone who placed and participated in Code: Dread! Lots more to come - stay tuned!

congrats cyborgs. but this chiss is watching you closely