Hello there Scholae Palatinae, the end of July is upon us. We’ve had the run of our first proper House feud since getting reclanned earlier in the year. There has also been some important club wide updates. So lets get into it.

Going to jump right into the results of the Survivors House Feud. Five Competitions, a whole mess of points to earn both for the individual and for their house!

There were a lot of really quality submissions to these competitions, so great work to everyone who went in participated in this! I had a blast grading everything.

I want to congratulate House Excidium on being the winning house from this feud! With a final score of 580.56 points, Excidium pulled away from Imperium with more points, total number of submissions, and individual participants! Both Houses had great numbers and it was close down to the very end. Great work all around!

As brought up in Mav’s most recent DGM Report the introduction of the new path system is moving forward. This change includes ongoing discussion over the new path rank names, and having each clan officially declare their alignment, via a Path Proposal. Each Path will have several “orders” associated with it, in the form of Force-using, Mercenary, or Loyalist (which was formerly referred to as “enlisted”) The ranks for these “orders” haven’t been finalized. But yes, the mundane non-force using option is right around the corner (or as I like to refer to them, the muggles).

If you want a tl;dr break down of what the three paths (Light, Gray, Dark) are roughly in the context of this system, Selika wrote up a great description of the three paths, including examples of characters from the SW universe. 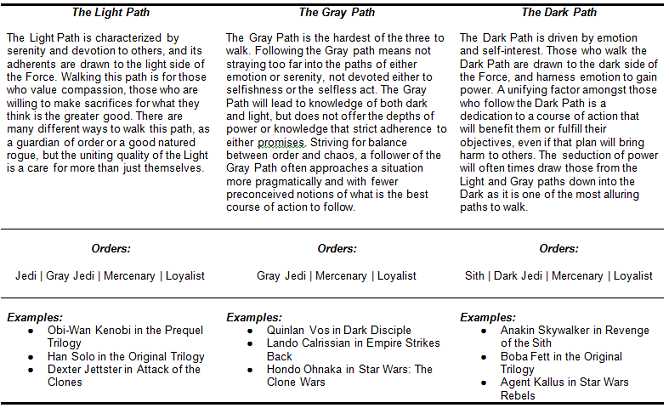 As for our own path, I put together a path proposal with some feedback from Eether, Cruise, Dante, and Koryn, along side information from the Path survey I had released in my last report. This hasn’t been reviewed yet, but I feel pretty confident about what our path selection is going to be for at least the foreseeable future. We are obviously staying a Dark Side aligned clan, but there was a bit of flexibility with our three “slots” of alignment. For this, the proposal (if you don’t feel like reading it) hopes to get approval for us to be a Dark/Dark/Gray Clan.

The proposal has some break down of the results of the path poll in it, but I have also gotten a few more responses since submitting it in for approval. I’m going to share the most recent results of this polling here. 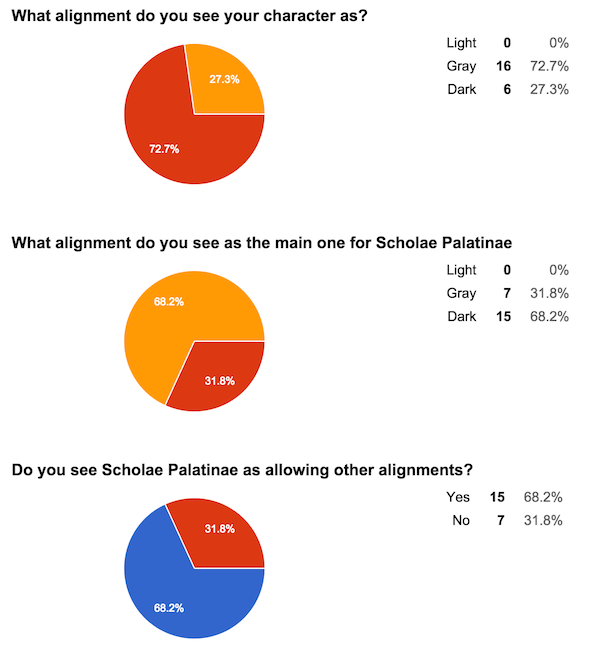 As you can see, with 22 responses, almost a full quarter of responses indicated character development that leaned more gray then dark. We had similar results with people indicating the perceived alignment of the clan as dark, but also being open to allowing gray development.

None of these results were very surprising for me to see. As a whole we’ve tried to balance stories lines with appropriate amounts of Emperor Palpatine darkness, with the gray nature found in a lot of the EU’s Imperial actions.

The comments section from this survey involved most people expressing interest in continuing this path, with some of them being a bit more… blunt, in how they don’t want to see the clan become a beacon of the light. Your concerns have been noted. :P

Earlier in the month Zagro decided it was time to step down from his position as Imperium AED, due to RL constraints. Zagro has been a great leader and member, and I wanted to just publicly thank him for his efforts. Dante, after a period of taking applications, selected Talon Jade to take up the mantle of Aedile.

We also had the opening of our first real battleteam, with Team Shadow Guard, led by Chrome, being focused mainly on having some fun gaming. This team sits in Imperium, where a large collection of the more, avid gamers already were. Chrome is assisted by Delak, so I know between the two, you will never see a shortage of support or enthusiasm for gaming.

Also I want to congratulate our recent string of DJKs from the past monthish. Congratulations to Arron, Calindra, Jorm, and Delak!

Trying to keep it short and to the point this month. Hope you all are having an amazing summer!

I'm surprised by the Paths results. Even though I viewed my character as more Gray I thought most of CSP would be into intense darkness.

I think most of us are playing the general Imperial vibe instead of direct following of Palpatine. I had expected to see a majority say Gray, but wasn't quite expecting 3/4s. The more you know I guess.

I find it funny that the majority see themselves as grey, but everyone else as dark

Those comp names are brutal. Picture this song: Onslaught - Canvas covered in blood. That is straight up metal :P

Seems a lot of people are going gray when the new system hits. How many do you expect to go Loyalist/Imp Officer?

Wow, that was quick to judge those fictions! Not surprised that no one said LS... >.>

From their hit album, "The Fragmented Philosopher", Onslaught brings forth new hit songs, "Canvas Covered in Blood" and "Know thy Enemy".

Congrats everyone. Excidium did well to win it all. I'm excited to see where Chrome and Delak take the new Battleteam over the next few months.

I always either try to make the competition titles as badass as possible, or jokes from pop culture. :P

I have some suggestions for your next comp series :P