Voice Report #7 - The One With Massive Skill Changes

Voice Report #7 - The One With Massive Skill Changes

Hello Everyone! I hope everyone is having a good start to 2021. As part of the ongoing “update the feats” project the Voice staff is working on, I have a number of edits, revisions, and completely new skills/force powers to cover. This change does mean many/most of you will want to update your Character Sheets!

These updates are fairly small updates, with the goal of helping further differentiate several skills, as well as clear up some commonly cited confusion members have had in the past. These updates do not change how any of these skills/powers work.

These two skills are very often confused with each other and used in place of each other. Additional language has been added to both skills to further clarify their differences.

The previous language for the Diplomacy skill made it feel very overlapping-ish with the Manipulation skill in that you are using people, vs bringing multiple people to the table for a mutually beneficial deal.

After the last war, there were several Clan fleet upgrades awarded based on the completion of different objectives. One of these was the Fleet Battle Meditation Chamber, which buffs the range of Battle Meditation to cover a small fleet. This generated some discussion regarding the overall range of the power. As space is very big, and on the ground battles significantly smaller, additional language has been added to reflect a proper “scale” for this power.

These modifications are fairly small, but important, changes that improve the functionality of these skills/powers. These changes mainly come from taking a component mentioned in a single level of the skill/power and reflecting that growth across all of them.

The update to Survival has two components. First, is the addition of terrestrial navigation, specifically for the off-grid no tools situations. This was mentioned in a few levels of the skill previously, so we are just adding on to it to further its impact on surviving in the wilderness. Second, is a further emphasis on the “bushcraft” component of survival. 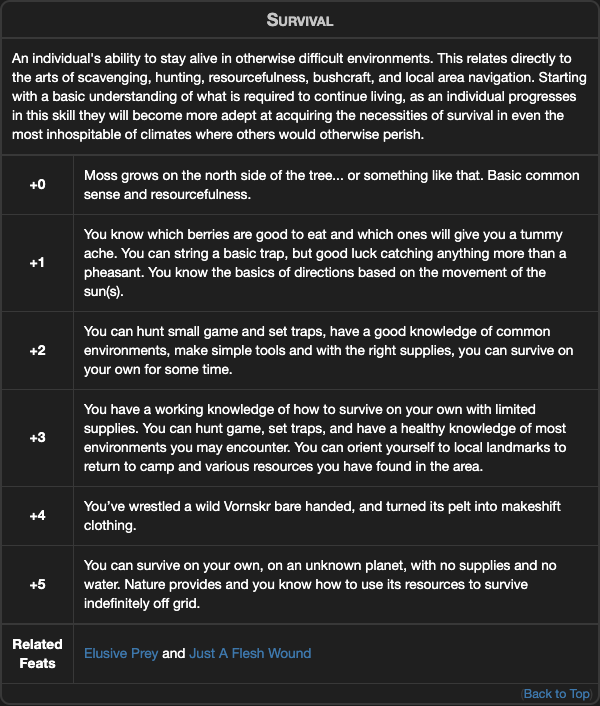 The ever-versatile Telekinesis power now has additional language regarding controlling the movement of multiple objects at the same time. Being able to move multiple things at a time has been a thing for a long while, but this change now better explains the difficulty/effectiveness of attempting to do so. 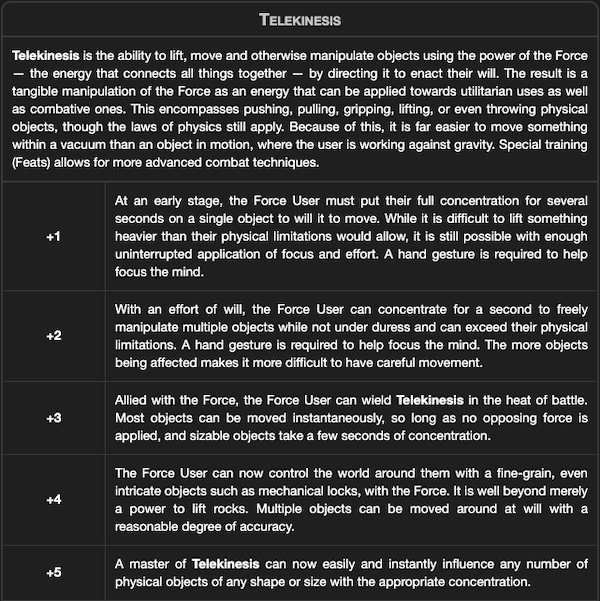 This update removes some of the stricter distance/proximity language that had been included in Telepathy. It also adds further information about how at advanced levels, a user can project mental images, sounds, etc to the person they are targeting. This should not be confused with Mind Trick, as the target would know this isn’t their own thoughts, as is always the case with Telepathy. This also should not be confused with Illusion which tricks the target’s senses (such a vision or hearing). Telepathy takes place 100% within an individual’s mind’s eye so to speak. 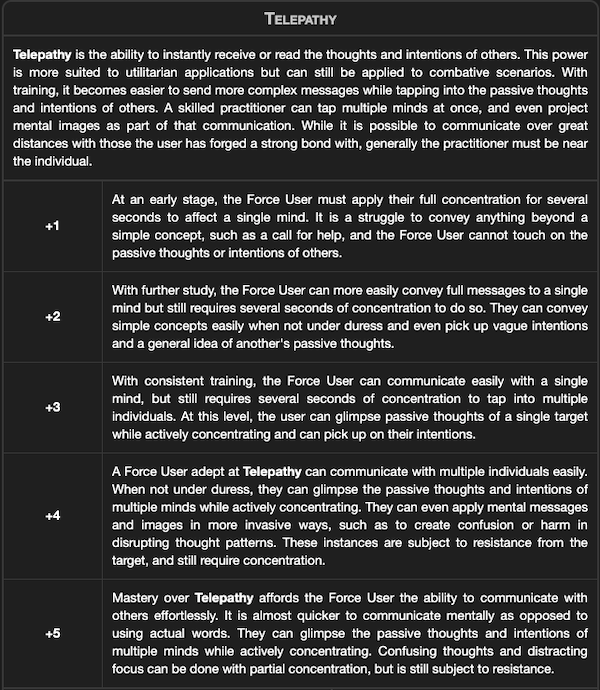 For our main event in this update comes a massive change to the Piloting/Vehicle usage skills in our system. Until now we have divided our Piloting skills based on the size of the ship. That line of what is a large/small vehicle is a bit fuzzy in the middle. This system also lumped things like a speeder bike and an x-wing together, while also lumping an AT-AT and a Star Destroyer together. There are a lot of pros and cons to that setup, and it has been something discussed at length on many occasions, from the Voice Staff chat to the general fiction chat.

To that end, the Pilot (S) and Pilot (L) skills are being removed and replaced with a different pair of skills.

As legendary pilot, Poe Dameron put it, “I can fly anything”. Rather than distinguish vehicles by size, or by ones that fly in space, or drive on the earth, if you want to drive/steer/pilot something, this is the skill to take. It covers the basic operations of single-pilot vehicles (such as weapons) and jetpacks/jetboots. Large vehicles with crews, this skill handles driving/flying it, whereas if you wanted to manage all the necessary components of those vehicles (sensors, shields, weapons) you would want to take a look at the other new skill we are adding, Operations. 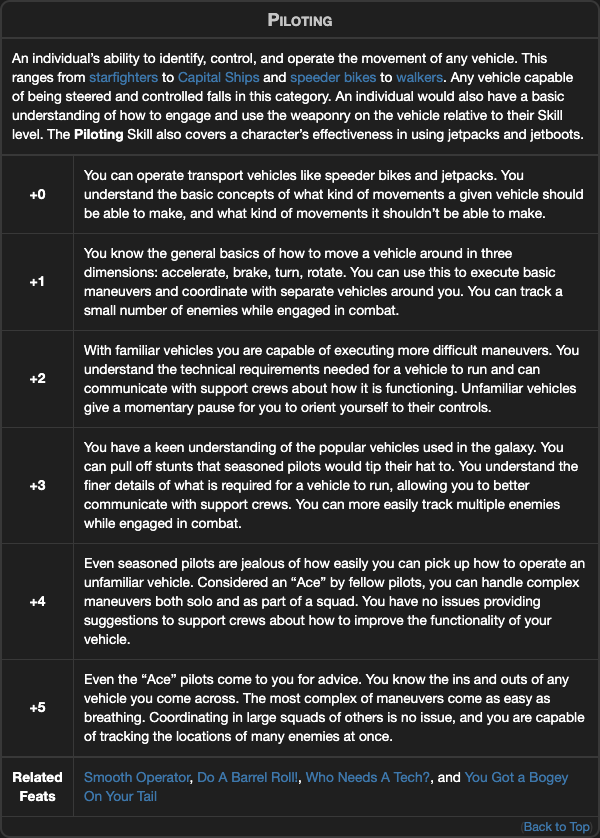 A large component of the previous Pilot (L) skill had to do with managing the many components it takes to keep a large vehicle functional from its central command location. Star Destroyers, AT-AT, etc, all have multiple individuals working on specific things to keep it functioning as needed, while one person was the pilot. This skill covers all of those additional components, as well as being able to effectively manage others in the same roles. 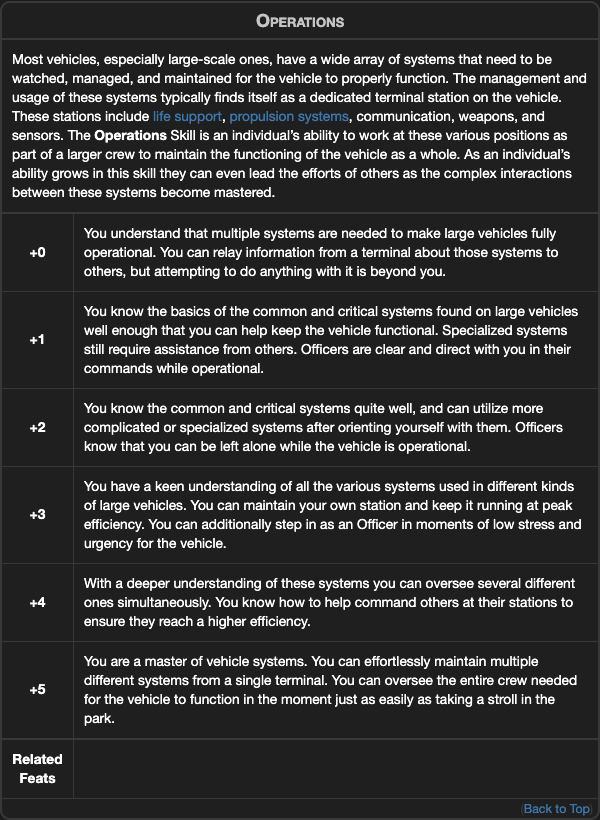 I hope you all enjoy these updates to the skills and force powers. Our goal is of course always trying to make it easier and clearer to utilize these components as part of your characters. If you notice an area either on the wiki or main site that got overlooked for these updates (such as linked feats, etc) please let me know.

With these updates now live, the Voice staff is going full in on the feats update. As such please remember if you have any feat ideas please submit them via the form linked below. Everything submitted will be reviewed by the Voice Staff to possibly be implemented into our system.

Woot! Salutes, smacks self in face

Sweet, I love the update on TK.

So was BM just nerfed because nobody wanted to buy meditation spheres?

Malik, Battle Meditation was not nerfed, you've just been wrong about it all this time :P

Considering the range was limited from large confrontations to only large ground confrontations it sure feels like a nerf, specifically one to justify a GJW unit reward retroactively.

Malik, space battles are on a completely different scale than ground conflicts for the skill. This clarification was made because people were not understanding that. Like the Hitchhiker's Guide said, "Space is big. You just won't believe how vastly, hugely, mind-bogglingly big it is. I mean, you may think it's a long way down the road to the chemist's, but that's just peanuts to space."

Noobs, the force power was the power of love, it was inside you all along!

Pretty much all on screen space battles have been with the ships within a few kilometers of each other, that’s not a larger scope than a major ground battle.

These things make so much sense, great work!

I like the new definition of BM as it keeps one person from battle meditation boosting an entire fleet. But they could in theory do a couple of capital ships. I think people tend to forget the scale of capital ships. One victory class star destroyer has over 6000 crew members. The changes to the piloting make it much easier to navigate the 2 skills. overall very nice changes.

Well so far nobody has used numbers as the reasoning, only distance.

And the examples there have been of the power, now all legends, have shown no issue with either range or numbers, the early examples didn’t even require the user to be stationary.

Does Canon or the EU give solid examples of space battles benefiting from Battle Meditation? Joruus C'Baoth, Bastila, and Naga Sadow in the EU? Meld, basically used as a lesser versioned meditation is used in the new Canon High Republic across a vast distances to combine efforts.

I don’t care either way, but there are plenty of space examples that include scope and reach that can be referenced.

The EU mentions the battle of Endor as an example, or Joruus increasing the effectiveness of Thrawns forces by 40%. And Naga Sadow was using battle meditation and illusions on separate fronts half a galaxy away.

I think in canon now one person used it while piloting a fighter, but that seems to come from a game so I’m not sure it counts.

Now I’m not saying the last part should be doable in the DB, but with the new change it has been made much less useful than any example given in SW legends or canon.