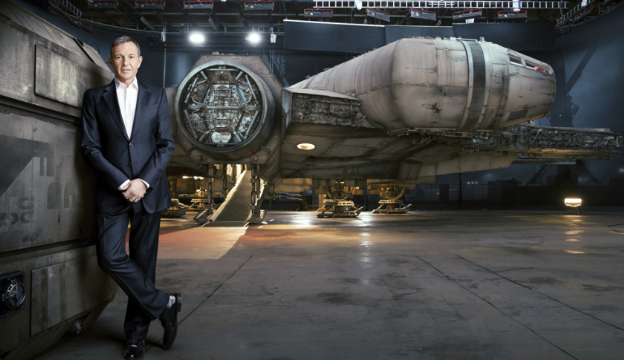 While the internet is still eagerly awaiting the release of Star Wars Episode VII, the Mouse knows how to keep a juggernaut moving. In a recent report to the Disney Stockholders, CEO Bob Iger (pictured above looking super chill with the Falcon) included the following note in his treatise..

"As one of the few people allowed to visit the set during filming….and one of the fewer who’s seen most of the footage…I can assure the millions of Star Wars fans who have spent the last decade hoping for a new movie this one will be worth the wait. And it’s only the beginning of a new era of exceptional Star Wars storytelling; next year we’ll release our first standalone movie based on these characters, followed by Star Wars: Episode VIII in 2017, and we’ll finish this trilogy with Episode IX in 2019."

Obviously, some of the things we of the massively obsessed may immediately take note of...

So... that begs the question, is the Mouse aiming at doing multiple trilogies? More stand alones? Stand alones with these new characters rather than the Han Solo/Obiwan/Boba Fett ones people have been craving? Or maybe all of the above!

Who knows... but I know this much, this is going to be one hell of a year for Star Wars fans.

Going way way back to when this deal first happened, I remember them saying they wanted to alternate trilogy movies with stand alones. Given what a massive following SW has, its going to be a big cash cow, so I wouldn't be surprised that once Episode IX hits, that they say another trilogy will be coming. They could pop these things out once a year for ever and it would make them all the money ever.

I mean...yeah, it'd be dumb to just say that this is it, especially since they're going with a much younger cast who can be the core for awhile after. That being said, it's those standalone movies that are really unknowns. The "these characters" comment could just mean SW as a whole, and not specific to the new trilogy. Of course, if it is focused on characters in the trilogy, then it'd be against all of the other rumors coming out about the standalone stuff being prequel-related

Sam Jackson comes back from the dead as the new Sith Lord.

Nerf-herders unite under one banner just to understand why Chewbacca is not getting his own movie. Considering his younger years as a warrior on Kashyyyk.

I bet it will be side stories like when Han said "the bounty hunter we ran into on Ord Mantell." It might possibly be along those lines -- going into more detail. Who knows, either way I am dragging the wife to the movies every year!