This review was prepared on the morning of November 12th, 2019. It does not contain any spoilers, only the impressions left on the viewer.

Before I get into the meat and potatoes of this first impression, I feel I should get a few things out of the way. First of all, rest assured there will be no spoilers in this review. You shall only find my reactions and how I feel about this series going forward. Secondly, I attended the Star Wars Celebration panel for The Mandalorian this year and am going into this having seen about 5 minutes of footage already. As a result, my excitement levels are high going in and this will have an impact on my impressions whether knowingly or not.

With that out of the way, let's get to the good stuff. 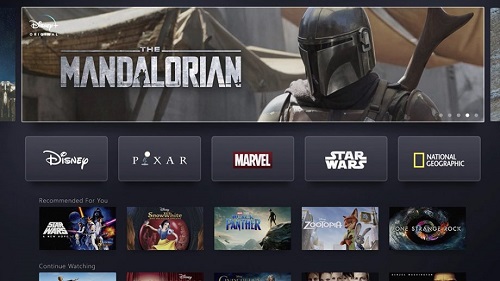 As I sit here loading up the Disney+ interface, I already know what's coming. The blue toned gradient fills the screen and the first thing shown front and center on the top banner is The Mandalorian in all its sepia glory. Judging by the font size used, it's clear that they don't want anyone misunderstanding what this show is about. Star Wars is tiny font. "The" is tinier. But "Mandalorian" is right there in big blocky font that's impossible to miss. Excitement systems are already fully operational as I click into it.

Never have I been more aggrieved by a spinning cerulean partial circle.

My impatience aside, the interface is fairly solid. It's Netflix meets Prime video and cleaner than both. Only one episode up, as expected, and it's time to watch. And...the tone is set immediately. For anyone following the lead-up to The Mandalorian, they would know that a Western vibe was on the menu and it's served up hot and ready. There is a clear dedication to the feel of the world we're being drawn into. No wasted sound on ambience except when required. Quiet when it needs to be, just letting you feel the scene.

Now, there's obviously going to be references to the Star Wars we know and love. Little things for the hardcore fans to catch if they're paying attention. I can appreciate that. There's also humour. Again, much appreciated. That's something that I've personally always loved about Star Wars. Healthy amounts of humour with fun heaped on top. 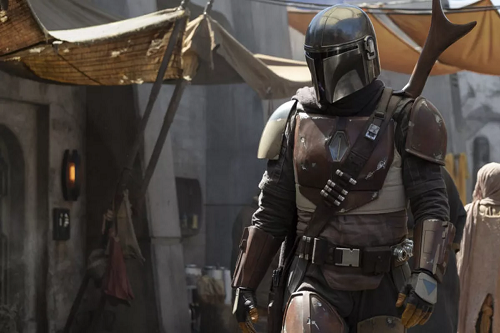 I'd also toss out the fact that ten minutes in there's already diversity of alien species in The Mandalorian. Think the cantina scene from A New Hope. Well, I suppose in a show about a bounty hunter one would expect a lot of cantinas. I have to say, I'm liking what they're doing. When you're lead is faceless (Mando helmets don't count as faces) everything hinges on their performance. The way the actor carries himself, with little movements and reactions to what's happening around them (or not reacting), has the potential to make or break the character. This is not a broken character. I enjoy watching the other characters bounce off the Mandalorian and the interplay therein.

While we're on the topic of performance, might as well point to the show's score. It feels Star Wars. While being uniquely its own, there are portions that can't help but tug on my nostalgia. But it doesn't throw it in my face or try to be smart about it. It's just part of the atmosphere. That's both fair and welcome.

Also, just for a moment, can we address the fact that a Mandalorian sticks out like a sore thumb in a crowd? Not exactly discreet when you have such an iconic look. It's basically announcing, "Yo! Time to throw down." Now, I like a good throw down, and so far this show is down to play. There's a lot here for fans of all kinds. Definitely has the feel of Star Wars within its core. It also doesn't toss anything at the viewer it can't handle. So, for those who know the traditions of the Mandalorians, you'll know what's up. For those that don't...well...it'll let you know what's up without talking down to you.

I did mention earlier that this show is comfortable in its own silence, did I not? Yeah, well, it definitely is. That's confidence in visual design and confidence that is rewarded.

What's this? Well, that's not CGI. Not entirely. There's something to be said about the tactile nature of actors interacting with something that's actually been made. It's there in the scene with them and they can reach out and touch it. Like or dislike the Prequel Trilogy, but it's heavy on the CGI in all things. It's not for nothing that the behind the scenes footage is just seas of blue screen and green screen. I'm glad that with the Sequel Trilogy, CGI-assisted practical effects and creature design took front and center. It's a good mix of both and makes the world feel more real. You're not going to get pulled out of a scene because something just looks wrong. 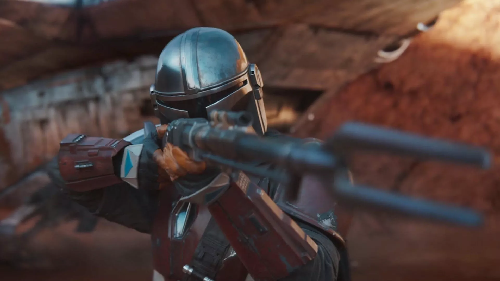 The Bounty Droid unnerves me in all the right ways. It's the most inhuman droid I've seen thus far in Star Wars while retaining a human-esque form. Everything about it is unnatural and they commit to this in the movements and behaviours. Quite appreciated as a viewer. Also, droids are the worst. They are tools, not friends!

(Editor's note: these are the opinions of Atra and are not reflected by the association or the show he is reviewing...also he's not wrong)

(Editor's note: Atra appears to be broken as the episode draws to a close. Our apologies as he reboots.)

Right, yeah...sorry about that. Typing while watching and the fingers just typed what I was yelling at the screen. Okay, well, that's the first episode. As I'm sitting here watching the credits roll (which I recommend if you're a fan of art) I just feel...happy? I enjoyed what they're doing. I'm not quite invested in the characters yet but I'm curious and intrigued. I like the characters I've seen. I enjoy how it is being presented and the content thus far. After finishing this episode, I want the next one. That's about the best vote of confidence I can give. I want more.

Luckily, we're going to get more.

i liked it. Disney might have recovered some from their fiasco of TLJ

I very much enjoyed TLJ, so mileage may vary on "fiasco". I think we should keep our focus on the content itself.

The episode was fantastic. Can’t wait for the next one.

Thank you, oh great Atra, for you words of wisdom.

P.S. It's such a great first episode.

I don't have anything bad to say about the first episode, and that droid was definitely my favorite thing. Also think the length of the the pilot was just right, didn't bore me for a second and left me satisfied.

Thanks for the review, a review for every episode?

Great review. And I’m with you, Atra. I also enjoyed TLJ.

I enjoyed the second Episode even more

And Chapter/Episode three is what has totally sold me, that was damn good. Looove it!

It was absolutely one of the best TV Shows I have ever watched. And if you haven't watched it you should do it!