It seems that a great deal of what we once knew, is never going to be the same. While we knew that with the new movies coming out, the Star Wars Universe we knew and loved was going to change, we were never entirely sure to what depth the EU would be changed, or affected. With an announcement from Del Ray books, and appearing on StarWars.com itself, it would seem that the changes will be... substantial.

While some elements are going to remain and be adapted, I think it's safe to say that the plotlines we knew and love are going to be changed to "Legends". For those of you who are familiar with Marvel, the idea of a secondary universe, or alternative timeline/storyline isn't anything new. That's essentially what I took from reading the Star Wars announcement today. The movies will be considered true canon, but they're not just going to throw everything else out... or something. I'll be honest, alternate realities always make me go a little cross eyed.

The bright side is though we also got hints at the importance of Star Wars Rebels in the upcoming changes to our beloved Star Wars, and a book by Joshua Jackson Miller revolving around one of the main characters from the new series.

Also, enjoy this EU Related interview with many of the key players in the EU and LucasFilm. 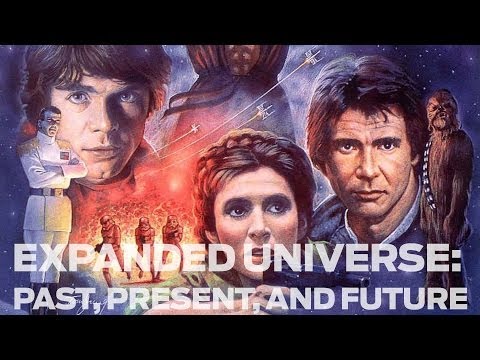 Edit: Thanks to Aabs for pointing out this link to the next four books that will be released within Lucasfilm's new unified storytelling approach.

Yeah...this very much sounds like the way they do the comic stuff. The Marvel movies would be the perfect example of this. You have your regular Marvel Comics, your Ultimate-line of comics and now you actually have a "Movie universe" for the Marvel stuff, with things like tv shows tying in. More or less the same idea, with elements of one playing into the other and vice-versa. Glad to know Clone Wars is considered "real" canon

Due to the fact that any and all sw novels had to be authorized by George Lucas and could only be allowed to do certain things by his decision, all expanded universe stories, characters, planets, etc should be Canon.

I read an interview by Disney CEO iger that before their acquisition of Lucasfilm, there are catalogues of over 17000 characters expanding 20000 years.

Hence all EU is Canon as far as I'm concerned

...I need to get better at markdown, I was halfway through typing the same post when luckily I reloaded to make sure and saw this :P

Also, my star wars heart is a little sad - but mostly what Halc said.

So Disney and J.J. are basically doing the exact same thing to the EU that was already done with the new Trek films. I wish I could say I'm surprised, but I assumed that existing canon would get the dropkick into the waste bin. It's pretty lame, though, that they're trying to say they're keeping old canon by throwing the idea that there's still stuff like Sienar in the NuWars universe. Because trivial crap is totally what people love about the last three decades of expanded universe canon, not the stories right? I'm betting that the new stuff is going to be treated in the same way NuTrek is treated by the Trek fans, with the new stuff being the "alternate universe".

It seems like KK is saying all new content will be linked together moving forward after Rebels (Yay, that means Inquisitors are CANON!) while the old EU (or parts of it) will move to the Legends category. I'm good with that. Sure, my brain is filled with countless trinkets of trivia that no longer have meaning, but oh well.

How does this impact the DB's Fictional Universe? It doesn't. We pick and choose what we want to use and we ignore what we don't want to use. Having a sprinkle of Legends and the new material is not going to hurt our ability to have fun and tell fan led stories.

Hmm, this is unfortunate but I can't be mad considering how much more awesome Star Wars things are on the future. Movies. TV. Comics and books and games will not stop. Sucks, but the future remains bright!

Crusades vs. One Sith, Vong... Imperial Remnant... I expect ALL of that to disappear. I sincerely doubt the Star Wars universe we exist in in the DB has anything more than a cosmetic link to what's happening in the new movies. Sure, the worlds and the aliens and the ships might look the same, but I don't think any history that exists in the EU post-RotJ.

Poor Vongerella, may she rest in peace.

I think they posted another article post-Yacks news post, but they've announced the next four Star Wars novels post-EU erase at this link. My understanding is that these books ARE canon. Everything moving forward will be developed in close proximity to the single canon line of film/television. I'm good with this. "Lords of the Sith" sounds cool.

To be fair to Vongerella, she probably would still work :P

What I'm basically expecting (and always have, tbh) is like the Clone Wars show: they'll just pick and choose what they want (which, let's be honest, is what the EU always did, despite its claims -- not like KOTOR didn't reimagine parts of TOTJ, etc), and once Episode 9 is done, I expect it'll just be a case of working out in your head canon what does or doesn't still work like has long been the case for the old Marvel comics and stuff.

For the DJB? We can probably wing most things one way or another, I expect. Vong? Sure, aliens sacked Antei, no real biggy -- same aliens might never have nuked Coruscant, but... I dunno how much that affects the "DB" itself? It'll affect certain people's characters -- I wrote a lot of Xanos's visions of Armageddon -- but my own character's arc doesn't affect the tangibility of the main DB story itself really. Same really with if some dudes called One Sith existed or not.

The main "big change" I guess might be useful is if we wanted to shunt the timeline a little depending on "when" we want to be in relation to the sequels, as we're smack bang in the middle of the new trilogy probably, which could be awkward, dunno. Maybe some of the double-time years could be rolled back into singles or something when we learn more if that works out better after we learn what Episode 7 is actually about, but will just have to wait and see.

They've now announced THREE upcoming novels. New Dawn, by John Jackson Miller, who wrote Kenobi recently and the Lost Tribe ebooks. Tarkin, by James Luceno, who did Darth Plagueis, Unifying Force, and loads of other totally heavily EU laden novels (he's basically reknowned as the dude who throws in as many references as he possibly can). And Lords of the Sith, by Paul Kemp, who did the Jaden Korr time travel duology and the Darth Malgus book.

All three are pretty cool authors, who've always been heavy on their EU referencing in their books, so it'll be very interesting to see what they come out with :)

For someone who hasn't read many of the EU books (the only series I have read through is the Thrawn trilogy), this is probably a good time to be getting into the habit of picking up and reading new SW books. A "fresh" start like this should make it easy to keep up with the "new canon"

I agree, Solari! I've always wanted to catch up on the EU but feel a bit overwhelmed. Now I'm comfortable dropping what I've missed and starting with these new lines knowing they are supa-canon.

Ok let's see. Clone wars and movies are canon, all others not.

So ewok Christmas special is canon. Yoda on ET is canon. Mace windu leaping off a mountain approximately over a mile and not getting hurt is Canon. Jar jar gets a girlfriend is Canon. Moraband is Canon

Sorry, but Disney is going to end up with serious backlash if they ignore the EU and go alternative universe and completely ignore what the fans have spent billions on in merchandising, novels, comics, video games, etc.

And if they do garbage heap EU, does that mean they hold no copyright on it then?

If it wasn't for EU, and starting with the thrawn trilogy, there wouldn't be the prequels, tor, mace, sidious, coruscant, naboo, midi chlorians, or Disney even interested in buying empire of lucasfilm.

I had really high hopes for Disneys take on Star Wars but it sounds to me like they are going the lazy route. I can understand retconing certain things but hacking the recognizable Star Wars Universe to pieces seems counter productive. The reason they spent so much money to buy Star Wars but if they destroy the franchise any more than the prequals did they are going to be left with an expensive tab and few fans. Also the worst Star Wars Retcon is apparently canon. Great. Maul and Ventress were awesome before and now they bore me and will apparently continue to do so.

Chiss are no longer canon and Boba stays dead? Not to mention the countless lame superweapons like the suncrusher? I like this new direction :P

No more talking trees are canon either, Malik, so shush you and go back to only being useful as firewood :P

All that's been conclusively said is that the old stories are no longer canon, and that the new movies, films, books, etc. won't tell the same stories. In short, they're not saying that everything ever seen following RotJ is gone forever; what they are saying is that, no, you don't know what's going to happen next. The stories are going to be different - but Lucasfilm has reserved the right to pick and choose elements used in the past and insert them where they best fit.

In short, maximum creative freedom. Chiss may very well be canon, as may be Mara Jade - if the Story Group decides to use them. Expect surprise appearances of fan-favorite elements and old EU references, with a story group put together to make sure every damned oddball Jedi isn't a sapient superweapon Force-Jesus. Until they rule something out, use it; if and when they replace it, we'll adapt. I'd say a good policy is that we can cherry-pick anything that hasn't been explicitly ruled out, until we know better and can update our history accordingly.

Actually, it's probably a good idea that they've decided to go off on their own direction and not rehash the existing EU stories. I mean, if they did we might get the "Star Trek Into Darkness" version of the Thrawn story. Basically, one that looks cool for about five seconds and then makes your insides die while killing puppies.

Also "Into Darkness" was awesome :D.

Into Darkness sucked. Sorry, but that was not Kahn. Ricardo Montebaum was Kahn and always will be him in my book. He played him much better than this Bennedict Arnold.

this is kinda crap...

"The first one was better!"

OPM Marick Arconae says: "The first one was better!" I didn't know Sci-Fi had hipsters :P

Call me what you will, I refuse to write off potentially awesome new movies because "The old ones were better." I haven't seen the new ones yet; they may well be the best of the bunch, they may well suck, but only time'll tell.