Natural light poured in through the floor-to-ceiling windows, casting faint shadows from the afternoon sun. Outside, rows of green fields stretched into the distance until they met sloped and rounded hillsides. Inside, the room smelled crisp, dry, and clean. Rows of tall shelving contained a wealthy collection of holovids, datapads, and holographic projectors that could bring to life historical galactic battles going all the way back to the days of the Old Republic.

In the center of the Grand Study, an array of high-backed chairs fastened into the floorboards were arranged in a circle. No one chair was raised on any kind of dias or pedestal, so everyone gathered sat at the same level—including the Lord Superior of the Collective.

“So, what have we learned since our last meeting?” Rath Oligard asked aloud to the gathered group of advisors that comprised the leadership of the Collective.

“Sir,” Ghaffa Ordam, Field Commander of Capital Enterprise, spoke first. “Our agents have intercepted the coordinates for this diplomatic meeting between the Brotherhood and the Severian Principate. On top of that, our reports indicate that this sector, known as Lyra-3, holds one of the artifact fragments we’ve had our eyes on.”

“So, not only do we know exactly where to hit them, but we gain another chance to add another artifact to our collection!” Captain Crimson exclaimed excitedly as she brushed a stray strand of auburn hair away from her blue eyes.

Crimson was the poster-soldier for the Collective’s Liberation Front, and was wearing her infamous armor. She had elected to remove her helmet for this meeting with the Advisory Council, however, which made it hard for her to hide the fact that her eyes always seemed to rest on Rath’s. The Captain had been hard at work gathering more recruits to their cause and longed to once again strike back at the wretched Dark Brotherhood.

“Excellent, then we know what our next move is,” Rath regarded Crimson with a faint smile and then nodded in approval as he steepled his fingers together. “We must ensure that the Brotherhood does not enter into any kind of arrangement with this Principate, and we will secure that artifact.”

“There is a...slight complication, sir,” Ordam replied with less confidence than usual in her tone. The Nautolan leaned forward in her chair and placed one hand on the side of her tentacled head.

While Ghaffa had served dutifully throughout the campaign against the Dark Brotherhood, the recent failures at Meridian station had even her on edge. With the loss of Daggo, she had been stretched thin working to assist Kerwin and Sparks with managing the Technocratic Guild.

Rath did not seem angry or annoyed, however. He quietly looked up at Ghaffa from his command chair and waited patiently for her to explain.

“They have chosen a location for the meeting on the edge of their own territory. Near Hutt space, to be exact.” she explained. “And as you know, the Severian Principate was part of the Galactic Empire and is currently a part of the New Republic, so they have a substantial military and diplomatic backing.”

“That of course means that we can’t mobilize our Battle Groups in full,” Sul Pahlee continued, taking his cue from Ghaffa. The Captain of the Collective’s flagship—Skylla—had earned his place within Rath’s inner council for his long term loyalty and service against the Brotherhood.

“Which means that the Brotherhood can’t mobilize their navy at full capacity either,” Rath countered. Even as he mouthed the words, however, his mind was already thinking two steps ahead. “...which also means that in any scenario, the Principate can not only bring the weight of their whole fleet, but also the threat of the New Republic.” Oligard ran a hand through his beard and considered the tactical issues before them.

“Yes. Not to mention, things didn’t go well the last time we made contact with the Principate,” Avitus Oligard, Rath’s Chief Counsel added. “They were not exactly open minded to our cause.”

“You mean they didn’t support the brave soldiers who risk their lives for the greater good of the galaxy,” Crimson sneered.

Avitus regarded her with hollowed, tired eyes. “Yes, it would appear so.”

Beside the Chief Counselor, Arraris Varken grunted and looked out the window and into the distance. The Chief Guardsman had little patience for these kinds of meetings.

“So. Our options are limited. If that is the case, perhaps I should meet with the Principate myself in person—”

“—Sir, I must insist against that,” Aarraris chimed.

“—let’s not be hasty,” Avitus whispered.

“—we are perfectly capable of handling this,” Ghafa sneered.

“—Ah,” Kerwin mouthed for lack of better input. He was easily drowned out as the combined voices of the Lord Superior’s closest advisors crashed into a deluge of heated discord. Their volume continued to spike as they each tried to speak over one another.

It was times like this that Rath really felt the loss of Daggo Mouk. The mad but brilliant Ithorian would have already been sitting on a piece of technology that would aid them in solving whatever current conundrum was being present. He always had, and it kept the other advisors in line.

The fiery haired leader of the Collective lifted his hand, drawing everyone to slowly come down from their hot takes on the situation. His eyes shifted calmly to the lone holographic figure present at the meeting in the only otherwise unoccupied chair available.

“You have been unusually quiet, Antillus,” Rath’s gilded voice slid smoothly over the newfound silence. “You have an idea.” Like most of his deductions, Oligard made it sound like a statement, not a question.

“I do,” Varryn Antillus’s voice was crisp and clear over his full-body projection. The Chancellor of Capital Enterprises uncrossed his legs and leaned forward. “I have everything I need to re-present our organization to the Principate,” Antillus smiled.

Rath Oligard regarded his longest running business partner with cool, calculating eyes. “You want to attend the meeting yourself, then?”

“Indeed. And this time...” Varryn trailed off, allowing the harsh reminder of the Collective’s previously failed attempts to negotiate with the Principate linger ominously in the air. “This time,” he repeated, “I believe they will be much more inclined to work with us, not against us.”

The rest of the council was quiet. They each exchanged glances and seemed to be thinking more clearly now that the idea of a potential threat to their Lord Superior had passed.

“The Brotherhood thinks they have the upper hand against us,” Antillus continued. “They think that the loss of Daggo and Meridian has crippled us.” While one eye permanently scarred shut, Varryn’s remaining organic eye narrowed dangerously. There was iron in his voice, even over the holocom. “So we will show them how strong we are, and just how fragile they really are.”

“I will leave it in your hands then, old friend,” Rath bowed his head respectfully towards the hologram. Antillus returned the gesture before his projected representation flickered and then departed to leave the chair empty.

The Collective move on from the loss of Meridian Space Station. In the year since their defeat to the Brotherhood, the organization has been hard at work searching for a definitive way to eradicate the Brotherhood and it’s Force users from the galaxy. Coordinates for a high profile diplomatic meeting between the Brotherhood and the Severian Principate approaches, but the Collective will not simply sit ideal. Click here to read the full fiction. 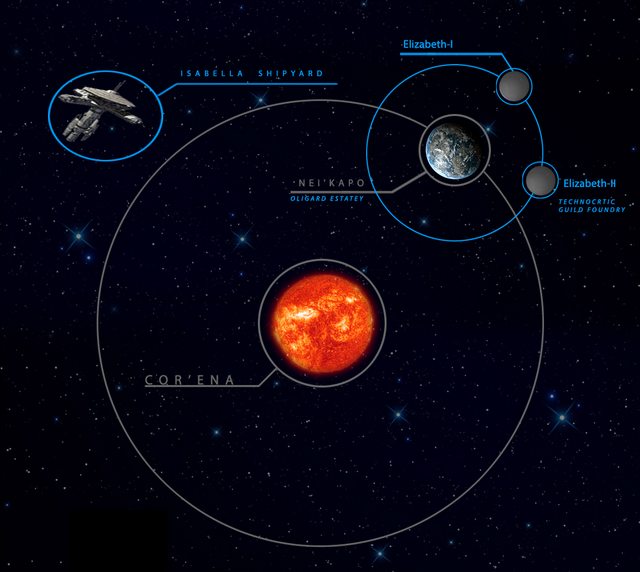 If you’re still curious about the Collective, please see their very detailed Wiki page that I’ve spent a lot of time updating and building out over the past 2 years.

This wraps up the current fictional story arc: Brotherhood Rising. The next fiction will kick off the Great Jedi War XIII story arc. This should cap off the storylines started prior to and post-Meridian as well. We focused a lot on the Brotherhood’s Societies, characters, and internal development, while introducing a brand new faction. I want to thank everyone that’s followed along and been engaged, even if these aren’t your favorite stories ever. I’m excited to finish things off with this Great Jedi War and look forward to seeing what direction the story takes after I pass it on to the next Voice.

More details about the War will follow from the DGM/GM. For now, enjoy the fiction and please support the official release.

Now that we know where they live we can steal their kidneys!

Anyhow, time to board the hype train

After being captured and suffering the effects of the alien species (ahem Vong) years ago, I am not fearing them turning anyone into Zealots, especially Force Users. The Collective will be destroyed and the Principate will join us in their destruction I foresee.

The Collective will fall. Their forces bodies scattered amongst the stars, and their children we will make them into private soldiers for our conditioning. If not, I am sure we have a few brethren that are quite hungry for their flesh.

War is Inevitable. We will not be defeated.

Heh lovely fiction with a very sinister cliffhanger. Gonna be interesting to see where it goes from here, especially as the war breaks out. Thanks for all the work that’s put in!