A deafening roar rolled across the arena floor like a tidal wave. The guttural growl of a large horned beast clashed against the chittering clicks of an immense, spiney insectoid. Scythe-like legs slashed through the air, grazing off thick, hardened hide. A powerful thrust from a horned husk was narrowly avoided as sand and sediment kicked up into clouds around the two creatures. The ferocious sounds of primal conflict broke against the high, circular wall that rounded the arena and crashed into the sea of screaming patrons gathered for the premier of the long promised exotic beast fights: Beast Brawl.

The Iron Legion and Navy were admirable careers, but with whole families and working class residents forced to live locally for security reasons, they were left little in the way of entertainment. Arx was not a planet that one simply visited or left. It had been designed to be a full service destination for those that served the Brotherhood in one manner or another. The citizens that accounted for most of its population were the families of the enlisted or workers employed in the service or manufacturing industries. You had to brave the Sorasu Desert to find any kind of gambling dens, so the Imperial inspired security and rigor of Arx lacked any noticeable avenue for excitement or intrigue. So they had all gathered to see a spectacle, to escape from the mundane routines of their daily lives. Especially those that lived in the capital—Eos CIty.

That all changed today, as they got to watch a rare Lylek—transported all the way from Ryloth—battle against an age old arena contender, planet Ylesia’s Reek.

The Reek roared as the Lylek shrieked, the later leaping with freakish agility off a raised plateau for the top of the former’s back. The Reek bucked its shoulders, hurling the Lylek tumbling awkwardly into a nearby trench that opened up. Thanks to the modulating design of the arena, the operators were able to add obstacles and alter the terrain to corral the creatures back towards fighting one another. Standing by in the wings, of course, were trained Creature Controllers who had extensive experience with wild and ferocious beasts.

A small Bothan child clung to its father protectively, peeking out behind his fur-covered arms to watch the action below with a mixture of awe and terror. “Papa, is the three-horn going to win?”

“It’s called a Reek, Baye’k, and it does seem to have the high ground, so to speak.”

The little Bothan’s eyes widened at that, having no doubt heard about the historic advantages the high ground provided.

Across the way, a pair of Verpine hissed and pumped their long, spindly limbs in support of the Lylek while an assortment of Aleena excitedly cheered on the pure carnage and did not seem to care who won, so long as blood stained the sand. All throughout the arena, a medley of languages and slang shouts intermingled across the diverse crowd that still seemed to sport a largely Human and Near-Human demographic. Things had certainly changed since the early days of the Brotherhood settling on Arx.

The Reek charged the fallen Lylek, thinking to end the fight quickly and impale it with its lead horn. The Lylek sneered and twisted sinuously, however, and at the last minute lashed out with a full onslaught of its barbed, venomous tail. The Reek let out a cry as the preternatural blade tore through the hide of its side. The crowd roared.

I’ve broken this into parts to try and make it easier to digest. If the fiction is too much, hopefully this review will be helpful! 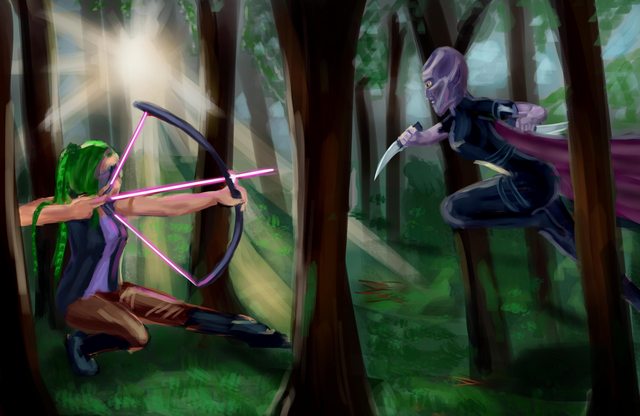 This fiction is billed as an Interlude. It’s part of the Macro storyline, but is not really meant to drive the narrative forward. The idea was to provide some in-fiction examples of some new, major things we launched this week. Hopefully the summary is helpful, and hopefully you enjoy the fiction.

Cool stories and awesome art too