Another week, another round of Mobile Competitions for Star Wars Commander and Star Wars Galactic Defense! This week in Galactic Defense a war is raging on Geonosis, an interesting new spin has been added to this week's event in that it is an Arena based event. You get to use four (yes four) champions and hold off waves of enemies inside an Arena. The longer you can hold them off, the greater your Event Point reward will be. Count Dooku (Dark Side) and Commander Cody (Light Side) both have a 5X (!) bonus to their Attack and HP during this event, making them key champions to have during it.

The Event Champion available from this is a bug named Poggle the Lesser. Special Move involves calling in more bugs (wtb can of Raid) to help him eat the leftovers on your counter. Dark Side only, everyone knows all bugs are evil. 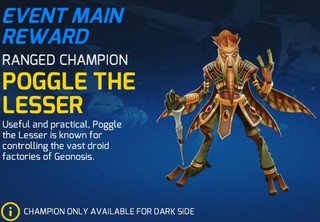 Star Wars Commander is running another Tournament style PVP Event. Pretty similar to past ones, there isn't really much new to report here.

I do have a question for folks though, initially both these Mobile Games were pretty popular and I've started to notice participation in the competitions drop off a bit. Would people be encouraged to pick them up and play again if I made the rewards 1st Level Crescents? Since, other than TOR, these are the only current and regularly updated Star Wars Games that are mainstream I think there's enough cause to increase the reward if folks would be interested. Let me know in the comments!

I'm biased since I still play this fairly regularly, so I'd be happy to take 1st Level Crescents :P

I only have access to the windows phone version of SW Commander, and its events never sync up with the iphone or android events... generally by the time the WP version rolls out the DB comps are already finished (sometimes months later), but otherwise I'd still participate if I could.

I'd realy like to see 1st Level Crsecents for SW Commander comps. I just don't know if this would have any influence on the participation level.

I don't seem to enjoy the game anymore since I find it very difficult to perform story missions and campaigns. I sorta gave up when things got too tough for my current set up. But I could pick it up again I guess.

I'm not sure 1st level Crescents would help to get members who don't already have a high level base involved. At least in Commander, it seems like it takes months to get to the necessary Command Center level and upgrade everything enough that you can actually compete for those Crescents.

I may be misinterpreting how the competitions work, but that's my impression.

not necessarily, for Commander, having a base at level 3, gives a way better yield and opportunity to score high on the event. But since it is supposed to be a game where you grow, people move out of lvl 3 quite fast. I stayed in it for a while though, mainly due to the comps.

I think it might help a little bit, but I think that sometimes there are tournaments within the game that are not reflected here. That got me confused for a week or two, then I noticed that they were back again. Maybe I missed the comps, but that was my impression of why I started to stop before coming back.

Db: It's true that at lower levels, raiding is much easier, but it makes it impossible to get far when they have the campaign events, where you fight progressively more difficult battles against the AI in seeking some prize. I could be wrong, but I think to compete in those you have to be high level.

Maybe the campaign competitions should yield a higher reward than 5 CFs per 10 missions down and 5 additional on the last one since it is essentially harder the last 6 missions.