Power is energy. Feel the power that comes from focussing on what excites you.

Another month has come and gone, and Autumn is well upon us. The season for the wonderful heavenly ambrosia known as Pumpkin Spice. (Hey… I did wait three weeks into Starbucks bringing it out for the season…) Autumn is an absolutely beautiful time of year to me, the magnificent changing colours of the leaves to the horrible Summer heat finally breaking. With it, also comes some fun little competitions. Yes! We have some fun activities already running that end in time for us to delve headlong into the Rites of Supremacy!

A large number of these movements were internal, with a few transfers into the Clan.

Congratulations everyone on your promotions!

ISI: Infiltration - The Imperial Scholae Intelligence has established the location of an important training facility of the Meraxis Empire. They required assistance of a highly trained operative in the attempt to infiltrate the complex and to obtain its schemes. - Clan Wide Fiction - Ends 2018-10-10

Isi: Identity Mark - The Imperial Scholae Intelligence employs multiple operatives the identity of which remains unknown to each other and to the public. However, they need to be able to recognize each other in case of emergency. Create a tattoo or a symbol that may be utilized a mark that will allow operatives of the ISI to recognize each other, while not betraying their true identity to our enemies. - Clan Wide Graphics/Multimedia - Ends 2018-10-10

ISI: Rebel Base - The Imperial Scholae Intelligence has managed to locate a base of the Resistance. Our operatives have sent us a photography taken by one of the scout probes, but it has been encrypted in the way that has separated it into multiple pieces. Your task is to decipher the file and put the pieces of the image back together. - Clan Wide Flash Game/Puzzle - Ends 2018-10-10

[ISI: Accessing a database(https://www.darkjedibrotherhood.com/competitions/14206) - Description: The Imperial Scholae Intelligence has obtain an encrypted datapad that includes vital information for our operations against the Meraxis Empire. However, it is protected by multiple layers of encryption. Your task is to hack the datapad and gain access to all information stored there. - Clan Wide Flash Game/Puzzle - Ends 2018-10-10

Halloween Mask - Design a Halloween Mask. It can be frightening, it can be humourous, or somehow both? Have fun with your design! - DJB Wide Graphics/Multimedia - Ends 2018-10-13

FIST - Destiny 2: Last Wish Club First - Form a fire team of six DB Members and take on the the newest and largest raid in Destiny to date. The first team to successfully complete the raid and submit a screenshot showing all members around the final boss will be awarded Pendants of Blood and immortalized on the Club First wiki page. - DJB Wide Multiplayer Gaming - Ends 2018-10-13

Shroud Syndicate: Induction into their ranks - This container competition will contain multiple competitions across the event. To participate in the competitions, you can subscribe to them. Competitions will be 2nd level crescents, apart from flash games, which will be 3rd level. - DJB Wide - Ends 2018-10-13

CSP Presents: Halloween Horror Night 2018 - On the world of Seraph, deep in the Caperion System, the curtain is falling on the season of Summer. Hot days and warm evenings will soon give way to chilly nights and inclement weather as Fall marches towards Winter. Yet, before the sun sets on Fall, the people of Seraph celebrate the world’s cycle of renewal in a celebration of life - and death - with a festival. The Empress of Scholae Palatinae, Elincia Rei Palpatine, has opened the borders of her territory - in a gesture of good will - to invite all denizens of the Caperion System to join the festival. The streets will be filled with costumed people, lively music, and elaborate decorations in honor of Halloween Horror Nights. Grab a friend, try several new things, and - most importantly - have fun! This is your chance to earn some awards (aka Shinies!) and embrace the holiday spirit. - DJB Wide - Ends 2018-10-15

Bold. The boy kicked his chair back into the Weequay before he could pounce, then threw his outstretched hands out. Bale swore through clenched teeth as an invisible hand ripped his Bryar pistol right out of its holster. He tried to snatch it mid-air. A futile notion. In the blink of an eye, San Kornal stood before them, Bryar pistol trained on Bale, the Rodian’s own blaster aimed at her. Another blink and twin blaster bolts lit the room red. The blast caught Bale in the chest, knocked him clean off his feet and over that ridiculous chair. He couldn’t breathe, could barely move. The smell of carbonized plasteel filled his nostrils.

So focused was Kornal on Bale that his offhand shot had missed Kayloo. Some stupid luck, that. She sprung. Krux hurled the chair out of his way. They came at the commander together. They moved in unison more like dancing partners than fighters. They were on him so soon, Kornal could do nothing but jettison his blasters. He met them head on. He was good, damn strong, and so quick. Moved like a lightning bolt. They barreled him with punches and kicks but he fended them off with seeming ease. A spinning round kick drew distance between San and his assailants. Up he went. Before they could so much as squawk, his boots whipped them off their feet. Krux kissed the wall, Kayloo the floor.

Excerpt from **The Maqor Stunt* * Written by: Bale Andros

Fantastic fiction written by Bale Andros for the competition Words and War - Phase 2: Fiction that earned him first place. The excerpt does not do it justice. Read the whole fiction The Maqor Stunt. This piece was incorporated into the Clan canon. Good work Bale! 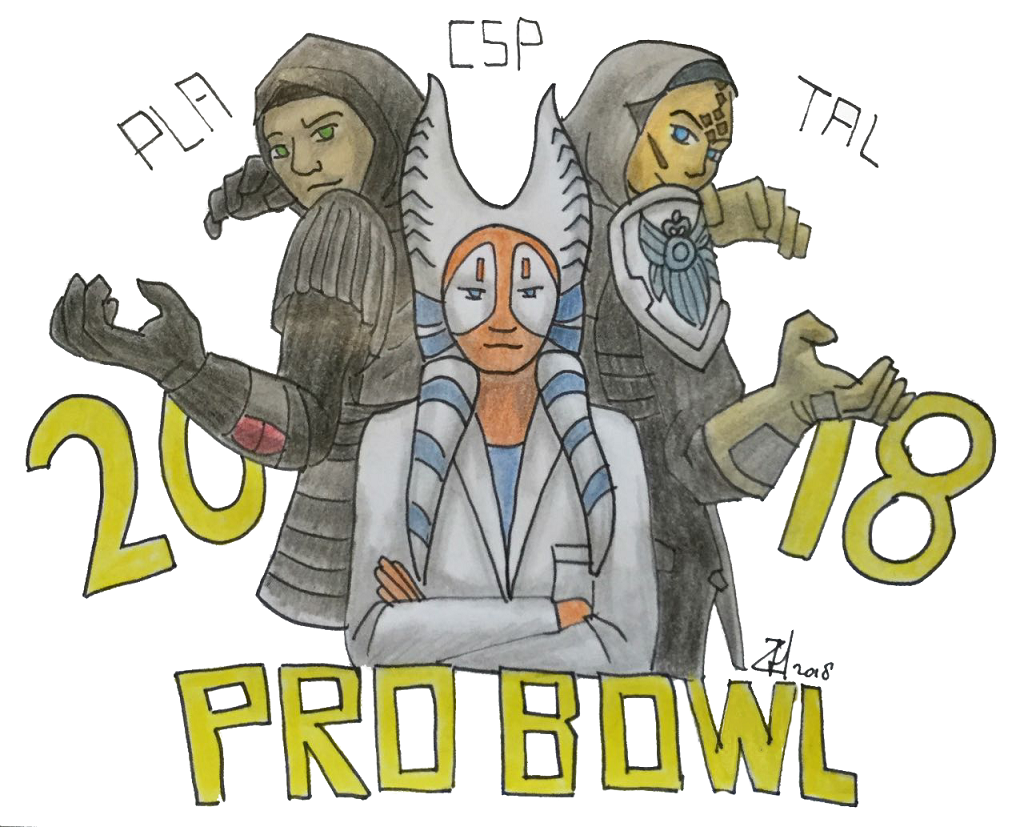 The above piece is Aylin Sajark’s winning entry to the Probowl back in August! She got first place with this wonderful piece! Well done my friend!

The mailing list has found little use as of yet. I do encourage members of CSP to reach out to those of us on the mailing list for anything you may need proofed. The mailing list can be reached at [Log in to view e-mail addresses] and we will work to get on top of your proofreading needs ASAP.

This quick guide is coming together well, anyone wanting to lend a hand is welcome to reach out, more eyes are always welcome.

In closing… you guys are awesome! Keeping that awesomeness in mind, we need to forge forward into the coming Rites of Supremacy with eyes set on participating to the fullest of our abilities. The amount of talent and skill in this clan is always a delight to see, especially when put into action in competitions. You guys can achieve incredible things. Let us show the entire DJB that Scholae Palatinae is a force to be reckoned with!

If you realized how powerful your thoughts are, you would never think a negative thought.