Second half of the Update that came out earlier this week. Include a reminder about the M:Fist opening, lots of info on Star Conflict (PoB!), details on multiple platforms that members are playing that don't earn CFs (these guys are crazy), and the summary of Gaming Competitions for this month.

For anyone who may have missed Ernordeth's News Report earlier this week. We have opened up applications for a Magistrate. If you are interested please be sure to email Ernordeth and myself no later than Monday, April 20th. Why so late? Let's be honest, I'm going to Star Wars Celebration this weekend and will definitely not be reviewing applications while I'm there. :)

Several topics for this game in this report. Lets start with some of the updates they've just introduced.

These Corporation (Guild) ships can be used to compete for sector control on the actual map of the world. In order to build a Dreadnaught there a few criteria:

So what can we do with the Dreadnaught?

This is a pretty significant part of the game, and I know our Star Conflict players are already searching high and low to earn every last scrap of Iridium for one of these Behemoths. If any of this sounds appealing to you, check out Star Conflict, the game is free to play and available on Steam. The Gaming Information page has information on in game guild officers who can invite you into our Corporation.

It is important to note that our Corporation has a 20 player cap right now, unless we put more RL money into expanding it. So if you haven't been on in a few months and we run out of spaces for active members there's a good chance you will get bumped. Nothing personal, just trying to maximize the space in the Corp.

Got some feedback that Star Conflict PVP Matches are taking a bit longer than initially planned. I'm in the process of gathering data from a few folks on this, and once we have a decent set of match times we may end up increasing the CF rewards for this activity. Stay tuned for more.

Pendants of Blood are now live!!

So we've been talking about this for a while. Here's the finished version that's going up on the wiki shortly. A section to add PoB requests will be added to the Gaming Submissions page as well:

PoBs will be awarded when a member earns Max Synergy on Ships in each of the following Ranks:

Ships which start at max synergy (shown in screenshot with yellow/gold background) will not count towards this. Each of these PoBs is a one time reward, If you already have earned the Rank 1, 2, 3 PoB getting another set of Rank 1, 2, and 3 ships will not result in a second PoB.

Gaming Submission and wiki are being updated for this change shortly after this report is posted. 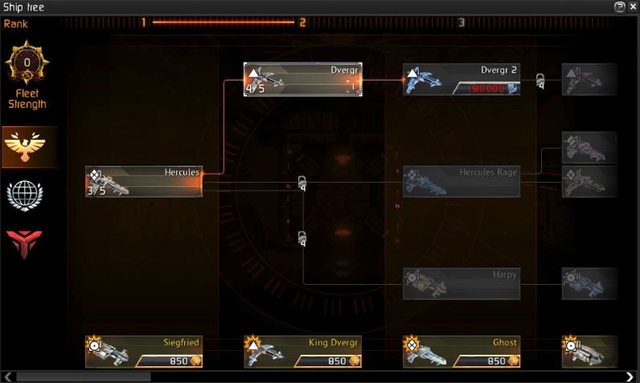 The Wide World of DB Gaming

Many members have been bringing the DB and Star Wars to platforms outside of our normal stomping grounds. This is completely cool. There's no reason the only games that we as a club should play together are ones where Clusters of Fire can be earned. So here's a list of the other Guild/Clan/Things that our members have in various games:

Those are all of the "extra" social groups that I'm aware of floating around right now. If there are others, or if you'd like to create one for a game you find yourself playing with other members let me know.

There are two Gorefests in April (for March and April). Dates are as follows:

Note: I added a Star Conflict Section to the Gaming Submission table, its currently pushed down a bit. If you can't find it scroll down and look center screen. Will contact Code-Monkeys to see if they can do some alignment magic.

Lots of gaming news and updates. Thanks Val.

For the ToR competition, do we pick one partner and stick with them?

Shameless plug: Guild War 2 is on sale through the 13th for $10. GW2 has no subscription model, you buy it once and play it forever. You can also be a member of up to 4 guilds at the same time I believe, so no need to choose between our little social guild and a hardcore guild (since the DJB guild exists mainly for members to find each other). It's worth checking out if you have any interest in MMOs. You can contact Seraphol or myself for guild adds.

Now I'm going to go hide before Furios throttles me for plugging a non-TOR MMO. ;)

I find myself playing World of Tanks... a LOT. It's free to play and it's a lot of fun. There are two more games, World of Warplanes and World of Warships. Warplanes is not as popular, but still fun. Tanks has a huge following and Warships is in closed beta right now (waiting on my key for that one). The Star Conflict tier system is based off World of Tanks (as you'll see if you play), so the layout will be familiar. And unlike SC, unless you are playing at 3AM on a Tuesday, there will almost always be 15 players per side (there is also no bots in WoT).

As with most free to play games, you can sink real money into it and a lot of people do. You can purchase Premium Time, which means for every battle you get more xp and credits (the in game currency). You can purchase special tanks or Gold (which you can use to buy tanks or premium time or even special ammo to use against other players. You can have guilds which can then compete in tournaments.

The game is a lot of fun and I would love to see more people from here play. Yes, obviously a WWII armored warfare game is not Star Wars related, but neither is GTAV. I highly suggest people check it out. I play under Hades_DB in the North America server. If enough people are interested we can start a DB Guild.

Oh man, I got so excited when I saw the PoB criteria for SC until I finished reading it. I totally thought I had 70+ PoBs coming my way :P Either way, time for some screenshots!

Go buy it everyone!

Andrelious - yup, you'll want to stick to the same partner

Hades - is there Guilds or Clans in WoT or WoS?

Yeah WoT and SC are ran on the same system. I'm a Star Wars gamer first and then I chose to play space/futuristic games so SC was what I stuck with after plowing WoT for a bit. Once Battlefront comes out..... man just man Im excited thinking about it.

Val, yes there is. All three games are able to have guilds. They are called Companies (as in a Company of troops). But everyone calls them guilds or clans in game.

I still have some star conflict gold (rl $) I coukd donate. I'm not in the Corp yet I played a lot of the game when it was,released and would love to get back into it again.

Who do I talk to about that?

Oh it shoukd be noted that in prep for the guild wars,expansion the devs also put the game on sale..

Like till April 13th it's 75% off for all versions of the game. It you buy it most of us are on maguma server (spelling). It doesn't matter what server you are on but if you want to do WvW together you need to be on the same server.

I can get you in the guild too so feel free to ask me any questions.

As much as I'm already playing SC for the PoBs, I have to ask, if the PoB is supposed to be for gaming excellence, how does that sit with getting 'grinding' PoBs in multiple games?

Should we also be able to earn them through, say, certain points in JA, XWA and the like?

If I made some custom missions for TIE, XvT etc, could we get them for them too? It's still /technically/ PvE - and XvT even allows coop missions.

World of Warships is a knockoff of Kixeye 's battle pirates, which me and my clan play alot of.

I'm sorry, a knockoff? I played battle pirates, this is nothing like that. At all. The only thing in common is the fact that they both have waterborne ships in the game. That's it. Please actually take a look at the game. www.worldofwarships.com.

I'll write that down and add you to my friend's list. What tiers do you have open?