Good Day\Evening Gamers! I am back, muahahahaha! Hope everyone had fun during the war and getting back into the groove of things. Congrats to the winning clans and to all those that earned shinies! Now onto some gaming news for you!

First up to stage is Star Wars: Jedi Knight II: Jedi Outcast, Jedi Academy is being re-released on the Nintendo Switch September 24th! So far it seems it is just the single player missions that will be available. There will be 24 missions, 4 boss fights with 13 different weapons. For more information check out the Nintendo Website . Would be fun if they included an online feature to fight against someone!

Also coming to Nintendo Switch is Overwatch! Which was a surprise, I personally didn’t see this one coming. It’s announced to arrive on October 15th. As a bonus when you purchase the game you get 3 months of Nintendo Switch Online Membership Included with your purchase. For more information or to pre-purchase check out the Overwatch on Swtich link here.

While on the subject of Overwatch. In mid July they announced the release of the new Role Queue added into the game. They have updated the matchmaking and queuing systems in Competitive and Quick play so players select what type of hero they would like to pay prior to joining the match. The system will match two tanks, two healers and two dps and they will only be allowed to select the heroes that correspond to the class they queued up to play. For more information check out this News Post.

Overwatch in August gained a new Hero, Sigma! If you haven’t checked him out yet he’s an astrophysicist to gained the power to control gravity. With his powers he can throw hyperspheres(gravity charges that go off like a grenade), a floating barrier, freeze incoming projectiles and make them into shields, fling debris at enemies to knock them down and for his ultimate launches enemies into the air and then slams them back down doing damage. Check out his story and more on the Sigma Information page. For the latest patch notes or if you missed any you can check out the Patch Notes here.

At the end of July for Heroes of the Storm a new hero, Qhira was announced. Qhira is a new melee assassin and is the second original hero to join the Nexus. She is a bounty hunter that is armed with a chainblade. This new hero inflicts significant damage and with her stacking Blood Rage on her enemies gives her health. Check out Qhira’s page for more information of her abilities and story! For patch notes and farther news within the Hots world stop by their website. 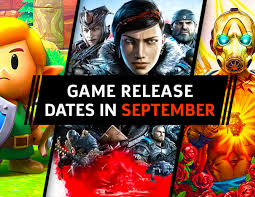 During the month of September there are a good amount of new games that have already come out this month or will be out soon! I have personally got Borderlands 3, and can’t wait to start! Just to name off a few of the releases this month is Final Fantasy VIII Remastered, NHL 20, The Surge 2, Spyro Reignited Trilogy, The Legend of Zelda: Link’s Awakening, Dragon Quest XI S: Echoes of an Elusive Age and Gears 5. For more information on the date for each one and other releases click on IGN’s Article that has each one with corresponding date. Have you pre-ordered any of the games this month?

Time for some information on game sales going on. On GOG.com (Good Old Games) there is Dragon Age: Origin, Dying Light: The Following and many more. Take a look and see if there is any that catch your eye.

Not subscribed to Humblebundle yet? Well currently the freebie is Endless Space Collection when you subscribe. But act quick if you want this certain game timer is running! There is an End of Summer 2K Sale going on as well. Where titles like Borderlands, Civilization, Grand Theft Auto, Bioshock and more to purchase. The sale only lasts for two more days, so act fast!

Thanks for stopping by! As Mav announced applications will be opening up for the FIST position. Get thinking about what you would do as FIST if your interested in applying. For the magistrates positions stand-by. Make sure you CC Drac as well. Good luck to everyone!

Awesome report and love the graphics

I do have one thing though, dunno if you or other's know, but Google Chrome browser is no longer going to be using Flash games or sites as of December 20, 2019. and many people and comps use flash based games for them. dunno if you all knew about this.