Hello, good day\evening gamers! Did you miss my report last month? Yea, I kinda slacked off there. No worries here is november's report without further delay! 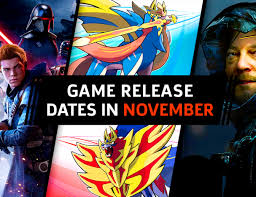 First one to highlight is the new Star Wars game- Fallen Order! The release date is November 15th, how many of you pre-ordered? If you haven’t kept up with what Fallen Order is, it is a single-player action adventure game. Developed by Respawn Entertainment and published by EA. The story is set in the Star Wars timeline shortly after Episode III-Revenge of the Sith.

You play as a Jedi Padawan on the run after Order 66 has been given. After escaping the purge you begin your quest to rebuild the Jedi Order, learn new powers all the while trying to stay a step ahead of the Empire. For the trailer check out EA’s website. Already seen the trailer or want so see some information about the gameplay? Check out Fallen Orders gameplay on EA’s website. It’s got lightsaber fights, explore new areas to gain new powers and abilities, leap, swim, wall run. Also you get a cute little droid DB-1 to help you out.

I hope they do good on this game. It surely looks like it will be fun and the countdown has started! If you are playing it rate it below in the comments or swing by the DBGaming chat to discuss it.

Next game to discuss is Pokemon: Sword and Shield. It shares the same release date as Fallen Order, which is November 15th. This is a role-playing game developed by Game Freak and published by The Pokemon Company and Nintendo for the Switch. WIth that said yes, it is on the switch.

This series is going to have several NEW features. There is going to be raid encounters, similar to Pokemon Go’s raids. The “Wild Area”, which is a fully explorable open world with free camera movement and changing weather that will have different types of Pokemon appear during that time. Two forms for Pokemon “Dynamax” and “Gigantamax”. New task mechanic called “Poke Jobs”, where you do quests for rare items etc. You can “Camp” with you Pokemon. Here you can play with them and cook, learn more about them.

There is also new items\features that help you grow your Pokemon. First thing you will notice is “Mints” if you use this you can change the stat-growth pattern. “Special Supplements”, to help raise base points. Experience Candies, normally you earn xp from battles. Now you can give a certain Pokemon xp from candies! Egg moves are special moves from Pokemon that were hatched from an egg. Addition to that is the nursery, if you have two of the same Pokemon in the nursery the one that does not have the “egg move” can learn it! For more information on these certain things check out Nintendo description here.

Well, with all that said there is ALOT of new features for this new series. I’m not even sure I got all of them but that is the majority of it. Where’s all the trainer’s at? Who had pre-ordered Sword and Shield? Comment below what you think or stop by the DJB Gaming channel.

Another one for this month is Death Stranding. This one was already released on November 8th. A PS4 exclusive, your goal is to save humans from the brink of extinction. The game is set in the United States during the aftermath of what was called the Death Stranding. On which had caused destructive creatures to come from another realm between life and death. It's up to you to cross the dangerous terrain to connect what isolated colonies that are left with a wireless communication network. See more information on the PS4 Website, they also have a video of talking to the actors and developers about the game if you want to watch it.

This one got my attention, maybe because it has Norman Reedus as the main character? clears throat, Or maybe not, idk but I may eventually try it out one day. Have you played Death Stranding? Of what I’ve seen so far, it's a little slow in the beginning, but picks up. What do you think of it?

That covers the top main releases for the month of November. There are others as well for more information check out Gamespots article. 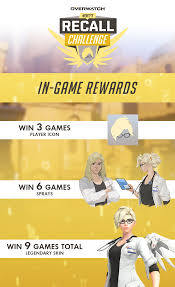 Started November 12 and ending December 2nd is Mercy’s Recall Challenge. The doctor is in! A new short story has been released Valkyrie. Winston recalls the heros, will she stay as Dr. Ziegler or take to the sky again. You will be able to earn a new icon, sprays and a legendary skin. Only have to win 9 games within the arcade to collect the skin and watch streams for bonus sprays. Check out more information Here.

Check out GOG.com (Good Old Games) there is Darksiders: Genesis, Airships and many more. Take a look and see if there is any that catch your eye.

Humblebundle is a good site to catch some sales. Right now for a limited time, is a software sale. If that interests you better act quick! If you miss it check out their main page here. If you are a Warhammer fan, check out their Warhammer Franchise Week Sale, up to 80% off!

That concludes my gaming report for this month! In closing, I'd like to give a big Thank You to my former boss, Drac. I’ve learned a lot from you. Enjoy your “retirement”, it is well earned. With that said, Welcome to our new boss Justinos! We’ve worked together before and I am excited to work beside you again. Justinos had released his First Report, if you didn’t check it out you need to.