Hello Scholae Palatinae! Welcome to another Consul Report! There has been a ton of stuff going on, including our feud, possessions updates, new awards, the release of a new movie trailer, and more!

Make sure you check out Jac’s news post below!

The new rewrite of the Covenant has moved beyond the DC review and is now open for comments from the general membership. The current covenent has been a long standing and critical part of what makes this club function. The new rewrite has been in progress for a long time. It is a pretty epic update adding far more clarification on things, and its readability is much higher. I hope you all take time to check it out, and to make any comments you feel need to be heard regarding it.

Intel: Brotherhood Wide - This is Mine Now

Among the slew of site updates that have been going live recently, the first phase of the possessions beta has begun. Possessions has been a long time coming, and is finally shaping up to be one hell of an addition to the site. Lots of things will be changing in the coming months due to possessions going live.

Many of you are probably already familiar with the “credits” option on your administrative menu which shows your current total of credits earned. This and costs of items are still being worked on. Expect some more big changes as the closed beta progresses us closer to the wide release. I’ve seen a lot of it as both a user and worker, and let me tell you, the amount of work that has gone into making this something incredible is mind boggling.

This is also going to change the way clan ownership of solders and fleets works. You can expect a lot of changes on our military front when the change goes live. When the fleet “reset” does go live, I will do my best to make sure the process of creating our new military forces is as transparent as possible.

One of the biggest additions that has come in the club’s history, was the addition of the Non-Force User orders. The Loyalist and Mercenary orders have done a lot to shake up and change the game for the club, and opened a lot of new avenues for people’s fictional development. One of the biggest setbacks for the NFUs has been a lack of Discipline options in comparison to the Force Users of the Club. After a ton of hard work on the project led by Wally, NFU Disciplines are now here

If you are already a NFU, I hope you check these out, and if you’ve been thinking about maybe making the switch, there some some incredible options given here now.

The world of art in the DJB has gotten another reason to celebrate. A new cluster has been added. When I had joined the Brotherhood, all there were for Clusters were Clusters of Fire. Over the years we’ve moved on from just PvP gaming to include Clusters for PvE Gaming, and for Fiction writing. And now all of our wonderful artists can get in on the love, with the new Cluster of Graphite.

Details on how to get the clusters, or run a graphics competition that awards them can be found in the most recent Herald Report

Yes, I know by now you all are tired of even seeing the word “feud”. But this here is the most exciting part! We Won!

It was a long and full several weeks while this ran, but everyone here really stepped up to the plate. I was incredibly impressed by both how many of you came out to play, and the quality of the submissions I saw. And now that it is over, to the victors go the spoils.

Congratulations to all of you, and THANK YOU for helping CSP kick some major ass! For those of you looking for ways to spend you time post-feud, there are a few specific competitions I want to highlight. Firstly, Blade is running an Feud Aftermath fiction competition. Secondly, Kor Vaal is running a Songs of Victory poetry competition for all House Excidium members.

One of the awards as a clan we received was a unique artifact weapon. I present to you, The Shattering. Forge by Sith Lord Okemi during his long reign on Antei, this polearm is a dangerous and alluring weapon. This polearm bonds with its owner, adjusting the length of its hilt to the needed length of its owner. As the bond deepens, the runes of its hilt glow. Ultimately when this bond is broken, the blade shatters then reforms itself anew. You can read the full details of its long history, and description on its wikipedia page.

The second award we were given, is usable by anyone within the clan. It is a awesome new dossier accessory option. The idea behind this accessory is that it is a covert and stealthy surveillance droid, capable of autonomous function, or direct control by its owner. This droid comes disguised as a bird, that yes, flaps its wings and flies around.

This idea came from two sources. First, Elincia, wrote about the SP34-R0W in the round 2 fiction competition during the feud. Then after the feud had ended, Blade had suggested a bird like droid for surveillance. Taking this as destiny it needed to happen, We pursued it with the Voice and Herald for approval and creation. I hope you all think it is both really cool and a fun addition to the toys you get to play with IC.

Final artwork is still pending, but I did get a wicked sweet sketch up of of it, courtesy of our very own Zehsaa, working for the Herald’s office! 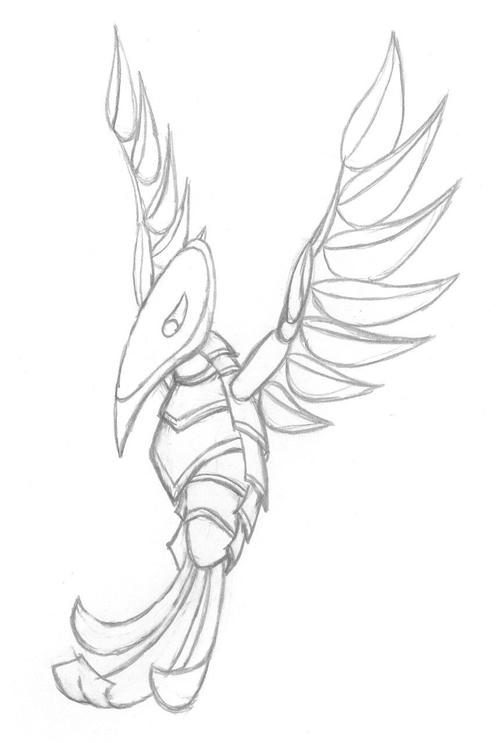 Intel: The Imperial News Net - On the Horizon

Just because the feud is over, doesn’t mean we aren’t looking to the future. For now, take some time to breath, relish the victory.

There will be some changes in regards to the organization of the clan, once we think will do a lot of aid in cleaning up how things are done. This will also come with a renewed focus in organizing our clan lore, and our actual identity as a Galactic Empire wanna-be.

Obviously for a while now I’ve been teasing our next clan campaign. My initial ideas for this one came back in the fall/winter of 2013 during the main portion of the Dark Crusade. So needless to say I am incredibly excited for what it is going to bring. The Order campaign will be coming “soon”, kicking off with our act 1, Operation: Starfall.

I hope the wait was worth it. I really truly want to thank all of you for your outstanding efforts to secure us victory in the Feud.

A promising future for one (if not the best) clans in the Brotherhood. Long live Scholae Palatinae! Congratulations everyone!

I'm not even in this Clan but I want your spearow. Mad props to Zehsaa for the drawing!

Beyond that, congratulations to all of you for your feud victory! Extremely well-earned :)

Congratulations all around boys and girls!

Nice report Xen. Congrats to everyone on their rewards!