Hello Scholae Palatinae! Welcome to the first Consul report of 2017! I hope everyone had an amazing holiday season, enjoyed Midnight, and is ready for a new year of opportunity and growth! We’ve had some very important things go into effect since the last report, including a new Covenant, and possessions officially going live! So hold onto your butts, this is a packed one. Up first, the epic finale to the Midnight Event!

They all sat up at once. The ritual had ended suddenly. It was a reflex almost as they shot up from the jungle floor. They sat in silence, breathing deeply, the humid air oddly soothing as they processed what they had just gone through. The trials were over, the nightmare they had faced inside Xen’s mind was at an end. Each knew it would probably be weeks before they had fully recovered from the mental exhaustion that was setting in on them. None stood, bodies surprisingly too sore to move. Several fell back from their sitting position, heads too heavy to keep up.

“Is that it? Is he free?” Mune asked, finally breaking the silence. Polis Jones shook his head.

“No. Not free,” Polis said slowly, hand holding his head. While the others had the Force to draw on, the experience for the archeologist was far outside his normal scope of abilities.

“So we went through all that for nothing? We could have been fighting and stopping the New Dawn!” Dek Ironius exclaimed, calm exterior shaken from the ritual. Even Polis could pick up on the dark tension sitting on everyone’s shoulders.

“Not for nothing.” Polis responded. He pointed half heartedly at the floating crystal still sitting in the center of the group. “Just not finished.”

The crystals ornate carved surface had gone from dull to vibrant. Its darkness had given way to an intense pulsing light. Just looking directly at it would make one’s skin tingle. Stana was the first to stand, her willpower overcoming the ache in her muscles.

“Polis. Just how does this thing work?” She questioned. She reached a hand up to touch it, but stopped several inches short, apprehensive of it.

“We just need to get it near Fallax. It is more or less, full of Xen’s remaining life force. It should handle the rest if we can get it to the palace,” Polis explained.

“So it is protecting Xen… Will it pull Fallax out and put Xen back in? Is it really just a prison for a spirit?” Elincia asked, slowly approaching the crystal as well. 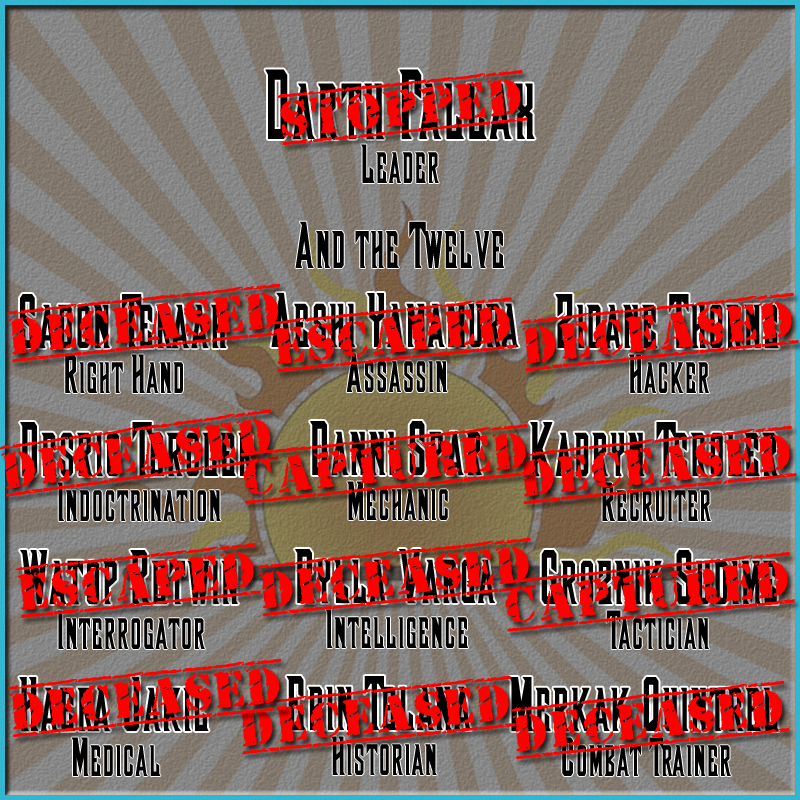 For the last twoish years, Jac has been working on a new Covenant for the club. This process has involved a LOT of people to make the covenant readable, understandable, and cover the things we need for life in the DJB in 2017.

For those of you unawares, the DJB has utilized a document known as the ‘Dark Covenant’ for years up to this point, more or less the clubs constitution and laws. The new Covenant (not Dark) has been uploaded to the wikipedia and can be found here. It is important for you as a member to understand your own rights in the club, and some of the more complicated facets (such as the CoJ). I know it looks big and scary, but it is very readable, and has a lot of wonderful information in there.

This has been a tremendous undertaking, so first, make sure to check it out, and second thank Jac and all the many many people who helped get it to its current state. The electorate unanimously supported the new Cov, and it went into effect as of January 1st!

It is official, possessions is live on the site. Out of beta, there is now a wide array of armors, weapons, ships, droids, and items to go purchase! This project, a decade in the making is an incredible accomplishment for the site, and the many people who have worked on it over the years! Go check the stores.

But Xen how do I afford such lovely items? Great question! If you go to your Credit Accounts on your admin menu, you can see what active funds you have available. For the most of you this will just be “Your Name’s Spending Account”. If you click on that you will find you have been earning credits for all sorts of things, such as participation in competitions, being in a unit, time in rank, merits awarded, etc. If you want to see the complete breakdown of what gives credits, you can check the salary policy, which our lovely Regent has put together. More than this, we as a clan ALSO get credits based on your activity, which lets us grow our clan fleet and army! Its an awesome system so please check it out.

Alongside the possessions release, there comes a few other updates to club systems. Gone is the “Request Custom Lightsaber” “Request Warbanner” etc, on your admin menu. Should you have earned the ability to request a custom weapon “skin”, need a new Warbanner, or are a leader in need of report graphics, you can find all of that under the “Request Custom Graphics” option. There you can open the applicable type of graphics. In the case of say, weapons or robes you will need to own the appropriate weapon or custom robe item to request it. The Warbanner form is still being worked on, so for the time being, you can use the old one. You can get some further information about this process from Esca’s P:HRLD News Post.

At this time, possessions has also impacted your Character Sheets! Gone is the weapons list section of the CS, replaced by your character’s loadouts. You can manage your loadouts from your “Manage Possessions” section in your Admin menu. No more worrying about formatting on the CS, just buy the weapons and gear you wish to have, set them in a loadout (or ten) and save them. It will automatically be linked and viewable on your CS!

You can expect even more goodies to be added to the possessions system, along with further features. Evant outlined some of the things he is working on in his latest Regent Report! Go check it all out!

Every now and again we as a summit get a bit investigative as to things we can do to better “fictionally” set the clan as attempting to follow the Galactic Empire. To this end we’ve made some very superficial changes to in character positions in the clan.

First off, as a whole, the entire Clan Summit is the Imperial High Command. Consul is going to remain known as Emperor, while Proconsul is changing from Grand Marshal to Grand Vizier. The position of Grand Vizier in the Galactic Empire was one heavily associated with the running of the Empire, and positions itself a bit more closely to being in line of succession of the Emperor.

The position of Rollmaster is changing from System Moff to Grand Admiral as the overseer of the Imperial Navy. This one was the main reason we ended up re-evaluating the current IC naming system. Moff itself was added as a rank name (Loyalist EL2) when the new order system went into effect, so in effort to avoid confusion we have (finally) gotten around to changing that.

As our fictional setting is obviously an important priority for us, I wanted to make sure everyone was aware of the update.

As pointed out above, possessions is now official live! This also includes Clan Possessions. Gone are the crazy spreadsheets of tracking our military, you can find all of our ships and soldiers listed clearly on the Clan’s possessions tab! While fictionally the change has not occurred yet (coming very soon from our wonderful Voice), the old ships we’ve used, including our three Star Destroyers and many legions will be going bye-bye. While we haven’t fictionally acquired our new ships as of yet, they are listed for viewing.

The Imperial Cocytus Navy and Military features some awesome new stuff, including a Victory-class and a Venator-class Star Destroyers. With our new military, we are adopting a new naming systems as well. Firstly, all military ships are given a prefix, in this case ICN (Imperial Cocytus Navy).

For our five “biggest” ships we have decided to abandon the old names such as Warspite and Dark Paladin. We are using the names of famous Imperials. In this case, we have Sidious, Vader, Tarkin, Thrawn, and Amedda (who was Grand Vizier).

This also means however, we still have a great many ships that are not named as of yet. We will be hosting a naming contest which will give the possibility of seeing your suggestions used to name our remaining ships! It won’t need to follow the famous Imperials as above, but can be generated in any way you can come up with. We are also going to be hosting a clan cosmetic aspect competition, allowing you guys to try to write up a custom cosmetic aspect for our main military ships! Expect to see an email on these two competitions soon.

Kylex asks: Why is Evant running around still dressed like Santa Claus?

Mord asks: What tips can you give an aspiring wiki'er who wants to create a really interesting page? Your's is amazing!

Blade asks: What color lightsaber do you want Blade to stab you with?

Alara asks: do you expect to have more major campaigns like Midnight for Scholae?

Alara asks: have you had turkey bacon?

Archangel asks: how awesome would it be to do ISD jousting?

Jurdan asks: how do you sleep at night knowing that you had a hand in killing several CSP members? (IC)

There you have it. You all did AMAZING work on Midnight, especially with it running alongside the holidays. I hope you all enjoyed it. 2017 is bringing a lot of new changes for the clan and the club, so get ready to make it the best year yet!

edit: Because I forgot, I wanted to show off the crazy and funny submission Archangel put together for his "epic fiction", check it out here.

Woo! Congrats everybody! :D And thank you for hosting an epic competition, Xen :D

Congratulations to everyone who participated!! And thank you to Xen and Eli for running this wonderful competition! :D

Pours drinks on them and laughs sadistically

Nice work! Congrats to Blade on the win of such a long competition series.