Hello and welcome! This one is a reasonably short one with a few awards, an update on the fleet situation, and some miscellaneous things.

We're coming to the end of most of the RoS related awards, but there's still a few that have hit the mailbox recently.

Terrific work to both of you!

And there is one additional award I want to draw attention to. Something that I think gets forgotten from time to time in this club is to reward members even when they leave to the Rogues. With that in mind, please congratulate our former game guru, Warp aka Rulvak Qurroc, for his Sapphire Blade.

This is a bit of change for us going forward. When we formed as a clan, one of the initial thoughts was to keep our fleet/assets lean and not be burdened with a "traditional" set of possessions.

As was identified in previous Battle Plan events, that left our clan in a very challenging position to actually present realistic (well, as realistic as possible with space magic) scenarios where we could fight other fleets. Luckily for us, we have a few members who love the possession system and were eager to jump in onto a re-structure.

We did keep a few of the major assets already in our order of battle (Tarre's Terror, Galaar, and Sundari Station) and the majority of our ground forces. Those have been supplemented with a number of support craft and complementary ships, so feel free to take a look and give feedback to the Summit.

A lot of credit and thanks to Von Ricmore for spearheading this as well as having just run a naming competition. We got a lot of names submitted there, so we'll be working through them to place them onto the order of battle as well as hang on to some for future assets.

Here is the update on where every is at and recent activity. Nice to see double-digit in terms of activity since the last report less than a month ago! Couple big jumps in there too. 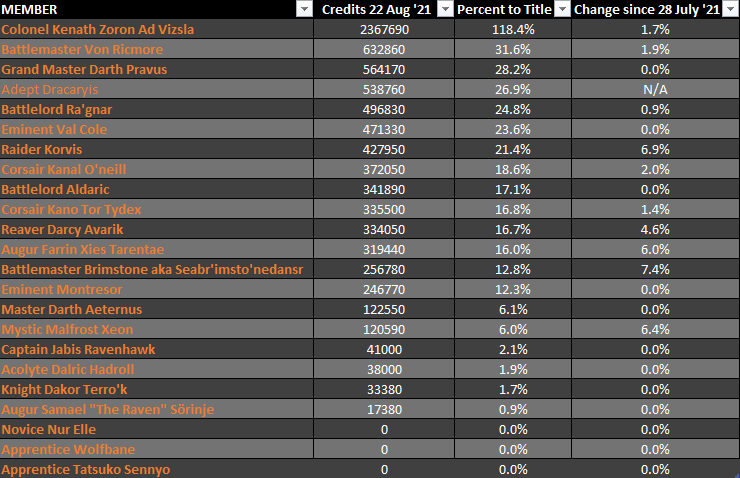 Keep in mind that this is based on credits - best way to earn credits is to participate and create! Placement is nice, but you still earn credits just by showing up, so with that, here are some of the Viz-focused ongoing events to get in on:

Beyond that, the competition page is pretty full of all sorts of stuff - trivia, puzzles, sports leagues, fiction, graphics, etc... Don't forget to check the long-running/series tab as well for some good ones there.

Further to that all, we are shifting a bit on the report schedules after this one - CON and PCON will be aiming for a report around the 1st of the month, with QUA/AED/BTL aiming for mid-month. So just 2 a month, and a bit easier to manage on our side of things.

So the next one should be Korvis at the start of September.