Hello and welcome! This features a briefing on the upcoming Great Hunt (being put together by Brim and Kanal), a credits/Clan Title update, and some small updates in the clan Wiki courtesy of the Pro Bowl events.

Here is the next in the sequence of our clan's bounty-hunter focused events. Brimstone and Kanal will be running this event, which will be larger in scope than the previous four iterations and will continue to build out our internal lore/history.

Kanal has posted a brief preview of one of the events today, and I will say that it immediately brought back memories of the old BHG from pre-split Emperor's Hammer days. I only vaguely remember participating in similar hunts in the past in that group, but I remember them being super unique, so I'm excited to see that being looked at as a reference/starting point for some of our events this go around!

The event is set to kick off in the new year and run until the end of March, so get ready!

I only had to re-do this a few times since I pulled the numbers before the weekend! (I meant to have this out last weekend, but I've been dealing with a sick kid, then a sick wife, and now a sick ME, so I didn't get around to it). The good news is that another half-dozen or so events got graded in the last 24 hours, so I had to run the numbers again! 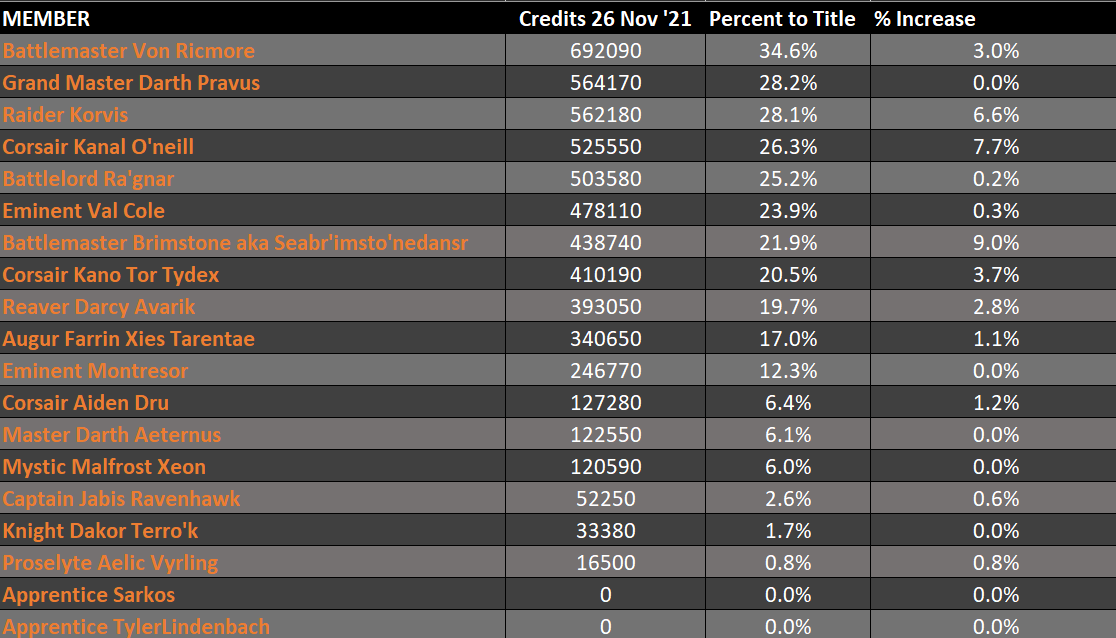 I changed one column just for better clarity - the change column shows the raw percentage you gained between the last update and this one, so hopefully that's more clear for all. A couple nice jumps in the 100,000s of credits for a few of you - great work! Those few events in the past day or so I mentioned earned the clan a few 10,000 credit increases for some of you as well.

This is progressing slowly, but that's not the end of the world. I'm content with it as it stands, as we don't have the sheer volume of years and events to draw on to pad out our backstory like some of the other clans do - that's a positive in my eyes (and, to be clear, I'm not being critical of the other clans for their history!) as it allows us a lot of freedom to fill in gaps and build up things as a group. That's exactly what some of these events are meant to do - stuff like the fleet naming competition over the summer, the Pro Bowl homeworld features event, and the upcoming Great Hunt. All of those give us chances to bring things into our own lore and history.

So, a few minor updates have been added, with another pending once we build out Daemunn and establish the wiki there. I've added the locations that were submitted into the Pro Bowl into the appropriate sections of the Zsoldos page and then the Daemunn one will be added in as well when all the dust settles on the Great Hunt. There's a few more pages that I want to get added (Abercrombie I for example) that we'll chip away at as time permits.

As bounty hunters, we depend on ongoing events to feed our clan and families. With that in mind, here are a host of "bounties" that you can do so with:

Those are just a few quick ones that I wanted to highlight, but the competition page is pretty full of all sorts of stuff - trivia, puzzles, sports leagues, fiction, graphics, etc... Don't forget to check the long-running/series tab as well for some good ones there.

Not much more to add in here - hopefully you stay warm and safe throughout this December (snow and ice have just started to show up here... booooo...). I'm around at all sorts of odd hours on Discord, so feel free to message me anytime about gaming (I'm all up in that Halo Infinite multiplayer as well as Forza Horizon 5 and Pokemon Go for non-standard games). I've managed to take almost an entire month off work due to some quirks in my schedule, so I will be eager for gaming and goofing around on Discord throughout the latter half of December into early January!

I mentioned this in chat as well - I count about 45-50 competitions scheduled to run throughout the month of December (not including ones that are in the Upcoming page or have yet to be submitted). If you simply participate (ie - no placements at all), that’s over 100,000 clan credits. A lot of them are very simple events that only take a few minutes. Of course, placing in the events accelerates that credit earning as well!