Voice Report #3 - The One With Post TRoS Force Updates

Voice Report #3 - The One With Post TRoS Force Updates

Hello there! Now that The Rise of Skywalker spoiler ban has expired, I would like to present updates to our force abilities based on the updated canon. This update also takes into consideration the new video game, Jedi: Fallen Order, as well as some general maintenance to the force abilities. This report also covers an update to the character sheet custom aspects policy.

There are several changes to the CS custom aspect policy/guidelines everyone should be aware of. Some are just documentation of things that were already in effect, others are fairly major updates to the approval guidelines.

1) We will now accept implicit balancing of aspects. For several years one of the biggest components of an aspect being approved is if it has a clear explicit balance to it. This change is primarily for aspects that do not provide a clear “buff” to the character. For example, if your character is a sarcastic individual, you no longer have to take the time to state in the aspect that this can cause tension or be annoying to others. That type of balancing can be inferred from the aspect.

Clearly described balances are still mandatory on any aspect that is providing a “benefit” to your character. All aspects are discussed by the Voice staff and final call on if an aspect requires a clear explicitly explained flaw to balance it is up to them.

2) All custom aspects must refer to the “base” status of your character. So if your character has dissociative identity disorder, the aspects can state that, but there is still the main base version of your character, and that is what the aspects should build upon. There needs to be a predominant identity that you can refer to, others can write off of, and judges can utilize for judging purposes.

3) Aspects are about your character and the traits that define them. You cannot dictate how all characters react/view your character, at most you can illustrate a common reaction. For example “this can cause others to find him annoying” is acceptable language to use while “everyone wants to punch his sarcastic face in” is not.

There are several general updates relating to Force powers.

1) Language on all Force Powers is being updated from stating “the Jedi” to stating “the Force User”. All force skills have been utilizing “the Jedi” as part of their description and skill level texts. Obviously, not everyone is a Jedi, so this language is being changed to reflect that.

2) Slow has been updated to reflect that the skill can slow down non-organic objects/beings as well as organic ones. This update comes largely from how Jedi: Fallen Order presents the skill. The new text of this update is as follows:

Slow allows a Force User to hinder the movement of a target through the Force. With more advanced training (feats) a Force User can also stun a target in place, or bring them to a complete halt. This ability affects both organic and non-organic targets.

3) A new feat called Deflect This has been added for Force Users. In my last report, I mentioned that all blaster bolt deflect/redirection is tied to lightsaber skill directly, and no longer limited to three of the lightsaber forms. This feat allows Force Users who wish to use bladed Sith Alchemy weapons instead of a lightsaber to still reflect blaster fire without taking points in the lightsaber form skill. The feat reads as follows:

While using Sith Alchemy enhanced weapons, {{member}} can use their Primary Lightsaber Form skill at their Bladed Weapon skill level for the sole purpose of deflecting and redirecting incoming blaster fire.

This feat unlocks at JM4.

4) The Defender Discipline for Force Users has had its Force Pulse feat updated. After some lengthy discussion about what exactly the feat is doing, and how it is doing it, there are two key changes to this feat. It now modifies the Battle Meditation Force skill instead of suppression. It has also gained the ability to hinder the effects of Mind Trick.

Force Healing and the concept of Force Drain has finally been made officially canon. The key difference between the two comes down to the source of the force/life energy used to do the healing. Due to this, rather than add a completely new skill, Force Drain has been added as a feat to augment the Healing ability.

Healing itself has been updated to allow the healing of others from +1, lowered from +3. 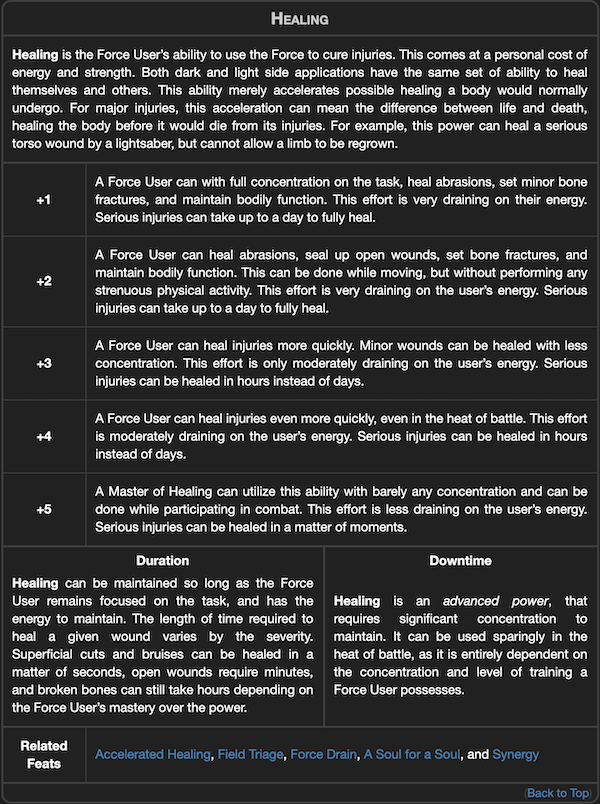 Force Drain: {{member}} can channel life and Force energy from a source other than themselves to fuel their Healing ability. This target must be a living organic source.

Force Suppression has been in need of some clarification and clean up. This update while not tied to any of the new canon stuff is still pretty important. The long and the short of it is the personal energy required to maintain suppression as well as the amounts you can suppress a target have been codified into the skills. This also comes with the baked in clarification that Suppression is causing a target’s body to not connect to the Force, not that the Force itself is affected. This update was based on the current language used for the Mind Trick Force power. 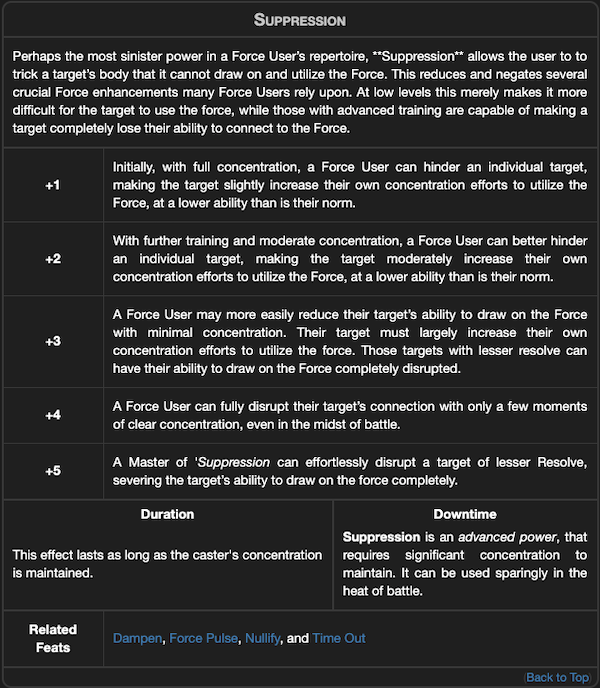 This change also alters the Dampen and Nullify feats to affect multiple targets instead of a bubble of space.

TRoS Abilities Not Coming to a CS Near You

As a preemptive buzzkill, I can confirm there are several unique Force abilities present in TRoS that we will not be supporting within our system. These primarily have to deal with the unique nature of the bond between Kylo Ren and Rey that occur throughout the movie.

Force Dyads - “Two that are One” this is an incredibly rare connection as stated by the movie, and it has been generations since it has occurred. We do have a Grand Master level feat, Force-Link, which allows a Grand Master to create the communication link between two individuals. This will remain the closest to having a “dyad” connection occur.

Physical Item Transportation - The ability to have an object instantly transport to another location will also not be supported. At present this appears to be a unique characteristic of the Force dyad relationship between Kylo Ren and Rey.

Force Flight - When we first see Rey, she is deep in meditation, floating with a bunch of rocks orbiting around her. As she comes out of the meditation, she does a slow flip before landing lightly on her feet. This is the closest we’ve seen to someone being able to use the Force to fly. We are not adding a flight skill ability, but if you want to have your character deep in meditation and floating go right ahead and do it. That is as far as this ability will currently be supported in our system.

/me flexes in Healing

Glad to see that everything is being considered when you all are adjusting the character sheet system. The implicit balance of aspects. Given I prefer character aspects that don't "buff" anyway this will make future aspect updates less of a headache- as I am sure it will do for some others out there.

The deflection feat is a nice compromise. Much appreciated.

This is amazing, character is really coming together with all these changes as of late. Don't have anything I could ask for anymore ^^

Really good update. Loving the changes to the CS system. Force Drain looking very interesting. Can drain be used to heal other people's injuries or just the user's?

Yes, you should be able to heal someone else with force drain. Physical contact is still needed, and I imagine it would be difficult to keep a grip on someone to drain while also touching someone else who is wounded but if you can find a way go ahead.

Glad everyone is digging the update!

Force Dyad would be interesting if you are captured and your weapons are taken especially if you are taken to a high level leader or target and suddenly, you have a lightsaber despite they searched every orifice. lol