Hello Everyone! Its been a while since there has been a normal Voice Report, and we’ve got a few new additions and things to cover now that the war is over with.

The Fiction Center has been updated to reflect the closing of the war, with Chapter 3 and Epilogue sections now included.

With the end of the war, we saw some major advancements as we pushed the Collective out of Arx, temporarily killing Rath Oligard in the process. At the cost of Gwendolyn’s life, Rath was resuscitated by his cousin Avitus. Distraught by this usage of the Force to bring him back, Rath clawed out his own eyes, and Avitus left in a self-imposed exile with the crystals that had been recovered.

I know there was a good amount of talk about what happened and “how it did happen” going on when the fiction dropped so I just want to hopefully clear up a few things. Rath was 110% dead for a period of time. Avitus used the combination of healing and the “Soul for a Soul” feat to bring him back. Yes, it had slipped my mind to update Avitus’ sheet to reflect that before the fiction went out, but it has been fixed.

Evant’s situation was different. Mav drained his body, and when he didn’t need anything else from him, Evant was yeeted into the antechamber. Miracle Max put it the best way, “He is only mostly dead”. And why did Mav want to ensure Evant was taken care of? Because in his visions of his “Sith Empire”, Evant was there at its onset. Mav has been playing the long game to ensure pieces were always where they needed to be to line up with what he saw. For now, Evant is sipping Mai Tais but you can expect him to return in the future.

Finally, I wanted to go over the Sith Ritual that was conducted in Chapter 3. The general idea is it worked like a spooky and powerful variant of Battle Meditation. Everyone felt it, everyone on the Brotherhood’s side got a boost, while everyone on the Collective’s side was rendered ineffective, and hostile to each other. The ritual and its lasting effects have been left vague on purpose. Those of you interested in having your characters explore how it personally affected them, can dive as deep as you want, while those who would rather brush past it, can also do so.

For those of you who want to look back at all the plot updates that went towards this war, you can find them here. This includes the two-part prelude that led to the formation of the Tenixir Revenants.

Following the end of the war, the Voice staff has received two different species proposals for our system. After some review and revisions, we are pleased to announce that both the Skakoan and Ugnaught species are available for use. 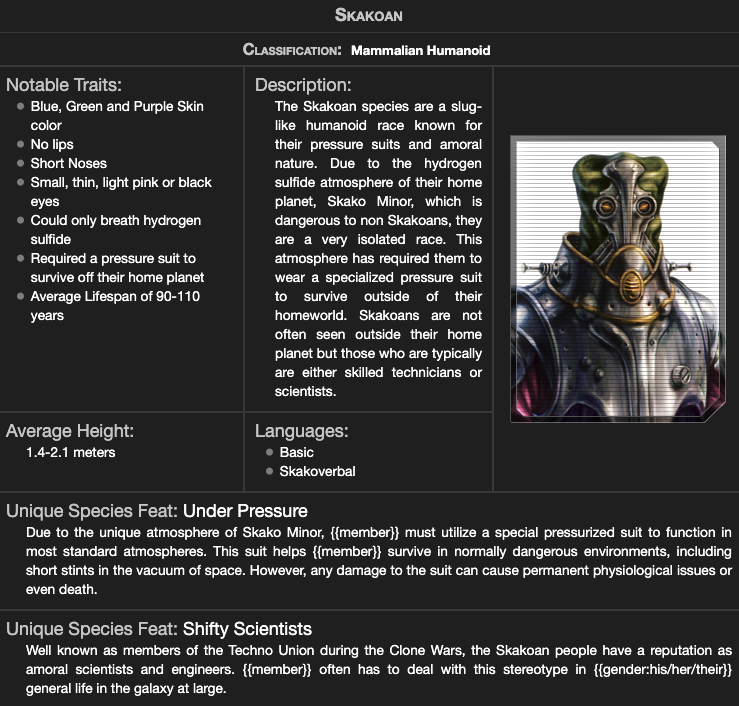 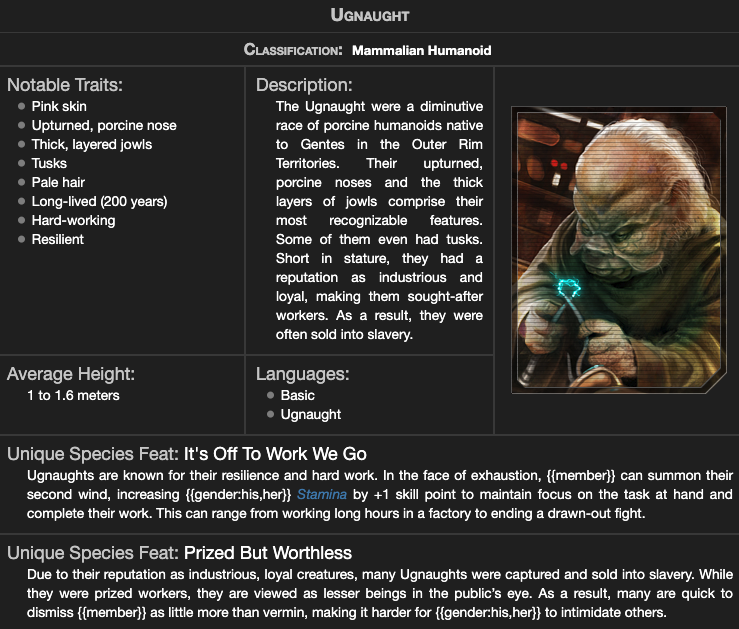 Obviously a lot of post-war goodies have been going out recently. I want to give a shout out to two, in particular, I was involved with due to their outstanding efforts for the Voice Staff.

First up is TuQ’uan Varick di Plagia, who was promoted to Equite 3. TuQ left the staff back in May, but was one of first who welcomed me into the role of Voice and provided some excellent insight into the office's functioning. TuQ is an awesome dude and did some outstanding work for the Voice staff in his time on the crew. I was ecstatic to lend a recommendation for his well-earned promotion.

The second is the ever so talented Atyiru Caesura Entar Arconae, who was awarded a second Ruby Sceptor. As Praetor not only has she weathered my insanity with poise and professionalism but continues to be an absolute beast of activity. Her management of the CS queue and reviews (especially my bad ones) has been a godsend, as well as her constant input and efforts on the various projects the Voice staff is undertaking. Additionally, her involvement in the DB Story Group helped shape the plot of the war, plus her aid in getting all of the member features written meant the closing parts of the war fiction was able to get released in a timely manner.

Yup, this project is underway. What does this project entail? Quite a lot actually, but the most important is further filling out our feat list. Some skills have a LOT of feats while others have literally none. This doesn’t mean we don’t want more TK ideas if you have a good idea for one, but it does mean if anything tickles your fancy you should most definitely submit it. Below is the current count of each skill and how many “choosable” feats are associated with it (non-species or discipline related feats): 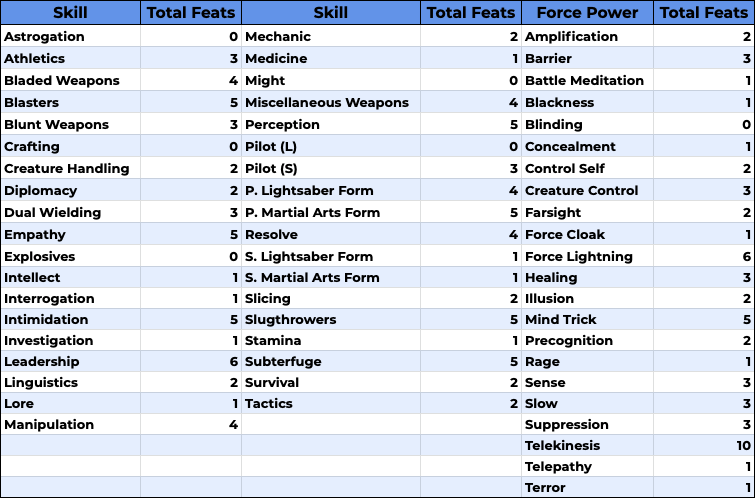 As you can see there is a lot of room to grow and ensure every skill and power gets its due.

The Feat Suggestion Form is, and will remain, open for the foreseeable future. We’ve got quite a few suggestions already and look forward to seeing anything else you guys come up with. The suggestion form is by no means a guarantee that a feat will be added to the system, but every single suggestion is reviewed for potential addition to our list of feats.

+100 points for the Princess Bride reference.

Send us your Feats! Not to be confused with feet. You can keep those.

Please no feet. We are not that kind of site or people.

pulls of his boots

War made me get jungle rot. Need some bacta. Whew, they stink!

puts socks back on.

That explains a number of points then. I had suspected those areas in the fiction given its outline and followed most of it, but thank you for the confirmation.