The basic structure of the Brotherhood works on a descending scale of responsibility: 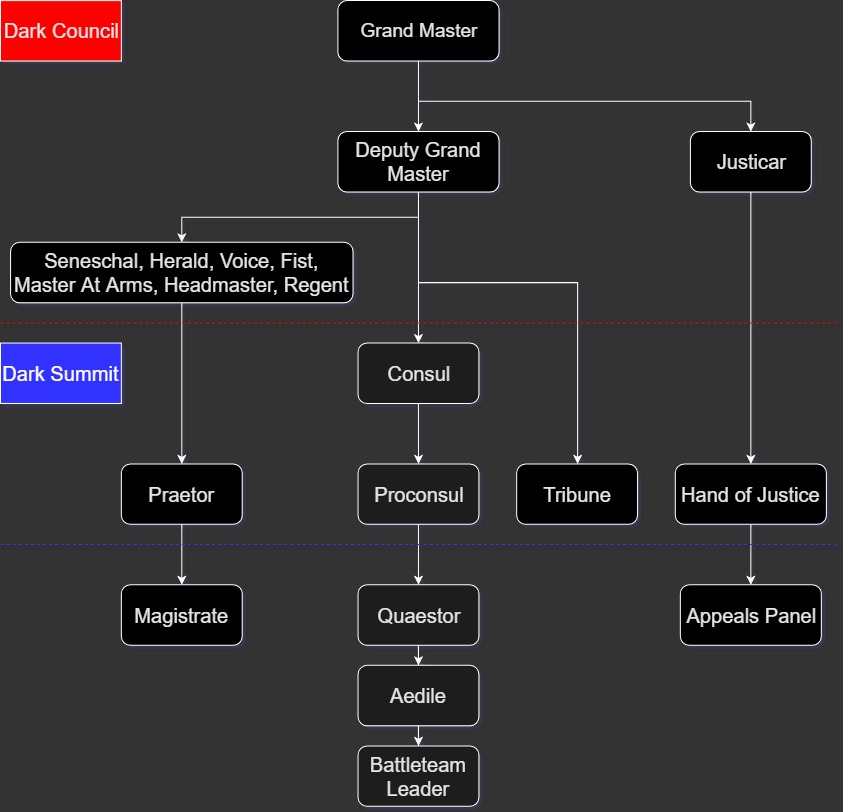 From Battleteam Leaders to the Grand Master, every leader within the Brotherhood is appointed to help create the best experience possible for club members within their sphere of influence.

We will now take a closer look at each level of leadership, the positions that support those structures, and those leaders' respective roles.

The Dark Council is the highest tier of leadership in our club. It consists of the Grand Master, his deputy and a selection of councillors tasked with running specific aspects of the Brotherhood.

While Tribunes and Society Leaders are not considered members of the Dark Council due largely to their limited scope of responsibility, they do maintain an important auxiliary role to the council. While principal Dark Councillors may not serve within a Clan, Tribunes and Society Leaders are free to maintain their membership within their unit of choice.

The Dark Council staff consists of the support personnel of the Dark Councillors. The highest position in this group is that of Praetor [P:...]. The Praetor is the main lieutenant of their assigned leader. They aid the Councillor in all his duties and often work overseeing large scale projects. One step down is the Magistrate [M:...]. In a way, this member is quite similar to the Praetor with one difference: a Magistrate is usually assigned to oversee a specific detail of the Councillor’s duties. For example, the MAA may have a Magistrate dedicated specifically to the awarding of Dark Crosses and Journeyman promotions. This M:MAA only works to approve or deny these requests, allowing the MAA and his Praetor to focus on other matters.

Then we come to specific support posts. These are linked to specific subgroups/organisations and answer to a specific Dark Councillor. Let’s observe a few examples: The Hands of Justice [LHoJ and RHoJ] serve as the aides to the Justicar; the Combat Master has Judges who answer to him; and the Headmaster has a cadre of Professors [PROF] and Docents [DOC] to help him run the SA.

Clan leadership is divided between three people. A Consul [CON] leads a clan with the help of their deputy, the Proconsul [PCON]. These members are tasked with maintaining their unit, developing it fictionally and overseeing the sub-structures within their clan (i.e. the House). The Rollmaster [RM] is the closest contact a new member has amongst their leaders. As such, they are tasked with supporting and mentoring members through the Journeymen ranks, as well as with pairing students and masters.

House leadership consists of two people: the Quaestor [QUA] and his deputy, the Aedile [AED]. They are tasked with overseeing their units, keeping an overview of the activities of the Battleteams under their banner and making sure their units operate efficiently and properly.

This is the most basic unit in the Brotherhood. The battleteam consists of a group of active members led by a Battleteam Leader [BTL]. It is the task of the team leader to create and run competitions for the team and to award basic medals for activity.