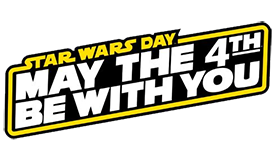 Today we are pleased to honor both Star Wars and our fantastic members that make this such an excellent place for all of us. To that end, we have an assortment of May the 4th themed competitions, where one lucky member will earn custom robes! Plus, we have opened the Celebration Store once again this year.

Every May the 4th, we honor our members by asking our Councilors and Consuls to choose members that have been particularly important to the club over the last year that they feel deserve Seals of Loyalty.

From Clan Plagueis, Scudi Ferria, Arden Karn, and Tahiri Thorn have been nominated.

From the Rogues, Teylas Ramar has been nominated.

And finally, the Deputy Grand Master and I have nominated our Dark Councilors each for a Seal of Loyalty, due to their tremendous efforts over the last year.

In addition to the May the 4th Competitions, we have recently unveiled two new aspects of our club we hope our members dive right into:

Until next time, may the Force be with you!

Holy Crapola! Thank you for the nomination! WoW!

Neat. Congrats to all our recipients!

Congratulations to everyone, there’s a lot of prominent names in there!

Congrats everyone and thank you! Its a nice surprise. And I can finally own a Tukata! Yay!