Darth Pravus stared out the viewport aboard his Super Star Destroyer. His eyes focused on a distant point in space, observing the outlines of a dream, a vision, that only he seemed to be able to see. The gears of his mind turned slowly but steadily like clockwork. He could see his perfect version of the Dark Brotherhood clear as day. Events were converging on a shifting horizon, jigsaw cutouts sliding smoothly into place.

Everything had gone according to plan. The Tournament had served its purpose. The Dark Council’s champions had been eliminated in the first round. The public displays of brutality and violence had kept the Brotherhood’s attention exactly where it needed to be. Even his directive that no competitor would be killed had worked towards his aim.

The Arconans had reacted predictably as reports leaked in about further mistrust towards the Grand Master. Odan-Urr had celebrated and took the victory as a sign of things to come. Of hope for the future. Hope. Funny thing, that.

The other Clans had remained passive, but had undoubtedly laughed at the very thought of a Jedi being named the Grand Master’s Champion.

Who was laughing now, though?

The Jedi had run like startled pheasants from a forest fire. New Tython was a smoldering waste, with what little value it retained stripped by his forces. They had become complacent. Weak.

Yes. Everything had, indeed, gone exactly as he had planned.

Marick rapped his knuckles three times against the durasteel door.

“Enter,” Pravus’ voice called out from the other side.

Marick did as instructed. He wore his typical black jacket with its gray-hooded vest and dark fatigues. Dark creases underlined his eyes, but their too-blue irises were bright and attentive as they committed every detail of the room to memory in the space of one quick sweep.

Pravus’ quarters aboard the Suffering doubled as a mobile office. Angular but spacious, the walls were decorated lavishly with trinkets, trophies and tapestries that all spoke to the Grand Master’s long list of accomplishments. The Grand Master himself stood with his hands clasped calmly behind his back. He turned just his head to regard the Combat Master, waiting until he stepped closer before completing the rotation with his shoulder.

The Grand Master’s white robes were immaculate and freshly pressed. No wrinkles or signs of wear. He regarded the Hapan before him like a weapon on a rack, a piece of equipment. Akin to all that served him, the Combat Master was a tool for the Grand Master to use.

“Here is my latest report,” Marick said calmly as he pulled out a datapad from his jacket and handed it to Pravus. “I compiled the information you requested from the tournament and edited the relevant video playback clips myself.”

Pravus looked it over, tapped a few buttons and watched the screen.

As the Grand Master reviewed the data and video clips, the Combat Master waited quietly, hands tucked casually into the pockets of his jacket. As he waited, Marick searched Pravus’ face for the answers to multiple questions he had but could not obviously voice.

There was very little that escaped Marick’s eye when he was looking closely at something. He pried for a crack, a quirk, a wrinkle. Anything that could give him a clue as to why the Grand Master had so bluntly displayed his power in order to drive the Jedi out of the Brotherhood. Something that could give them a cause to rally to. Pravus would not be the first Grand Master to let the power of the position cripple their sanity. The Brotherhood had dealt with tyrants before and they were no strangers to the mania that often accompanied them.

Marick continued to study Pravus, taking note of his stance and posture. Straight but relaxed, the Grand Master was completely at ease with the world around him. The air of control was palpable through the Force. His eyes were cold, calculating and, most importantly, utterly sane.

The Arconae felt a completely different type of fear coalesce in his gut. Things were worse than he had originally thought. Pravus was no mad king.

Pravus knew exactly what was he doing.

Read the rest of the Fiction here

The Grand Master’s Invitational Tournament has reached its conclusion. It was a hard fought battle, and one that converted to 27 pages when ported into Google Doc. In a match this large, both judges (Mav and I) had to read the match more than once and spent over a week discussing the outcome based on our real life schedules. In the end, there can only be one winner, however.

You can view the final match and verdict here. 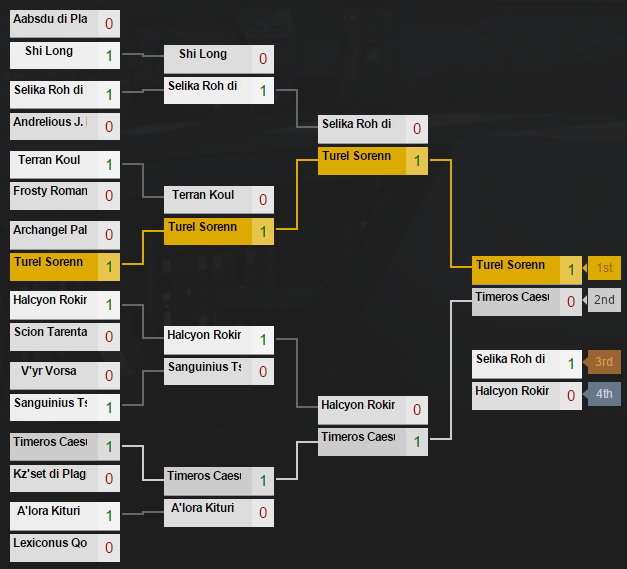 Here, you can see how the tournament played out over the course of the past few months, and what the finalist went through to reach the end.

I wanted to thank every single member who participated in this tournament. You helped show that the ACC can function as a primary platform in the DJB. I will be sending out a feedback survey to everyone in hopes of continually improving the ACC and future competitions that involve it.

Here is a quick recap of the rewards for the winner, runner up, and final four. 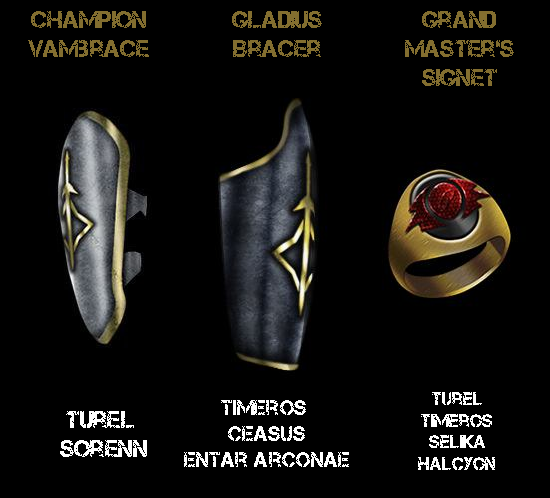 Each of these items may be listed in the Weapons Loadout section of the Character Sheets.

(Note: the reward weapons have been changed slightly from the original writeups after talks with the Voice and looking over how possessions will work. Details subject to change.)

With the Tournament finished, I still have a lot of work to do. Here are a few quick hits to hold you over until my next report.

I selected two new Judges to serve on the ACC Staff. I am pleased to add Wuntila Arconae and Alethia Archenksova to the team. Both have gone through the required training I set in place for Judges, so you should see them popping up in Qualification Exams and Matches.

Thank you to everyone else who applied. I keep everything in a folder on my email, and will let you guys know if another position opens up in the future.

(Please note: all staff members hired are also approved by the Voice, DGM, and GM per the Combat Master’s selection).

If you are looking to run an ACC Competition, please keep the following information in mind

All members looking to take part in the ACC in both a competitive or recreational (for fun) must take the ACC Qualification Exam. For further knowledge of the current standards used in the ACC, I highly suggest taking a look at the ACC Combat Studies Exam, which breaks down a full ACC match and asks for multiple choice answers based on reading comprehension. This is a great way to learn about the new ways Force Powers and Skills work with Aspects and other elements of the Character Sheets.

I repeat: all members that wish to take part in the ACC must pass the Qualification Exam. This goes for former Trainers, Judges, Combat Masters, and Dark Councillors alike.

If your exam takes any longer than 2-3 days, contact the ACC staff or myself directly at: [Log in to view e-mail addresses]

You can find an archive of my previous Combat Master reports HERE. These reports contain a lot of helpful information, so if you’re a new or returning member, I’d suggest leafing through them.

That’s all for now. Keep an eye out for my next report.

Congrats on the win, T!

Very proud of Timeros and Turel for their epic finale. Really shows why you both landed in the Championship Match.

Excellent showing by all. Congrats folks.

Nice job, Turel! Can't say I'm ashamed to have been knocked out by the tournament champion, but this was a great win for you all around. :)

Great job everyone! Congrats to Timel!

TUREL AAAAAAAAAA I'M SO PROUD OF YOU BABY

Congrats to all participants and yay new judges! cracks whip

Congrats to all who participated in the tournament! Worthy competitors all.

I knew you could do it.