Another report and another wall of awesome text and visuals below. Your Blade of the Fallen has managed to proactively expedite mission-critical synergy and progressively streamline pandemic architectures, all while enthusiastically optimizing team building channels.

In more serious news, we have been busy in the Plagueis Summit planning for and participating in the Winter Trials competition series (see below). More telling for my (and some of the summit’s) personal adventure is the building of Xolarin as a Dark Jedi, increasingly doing “bad things” in the search for truth. Oh how much he doesn’t know…

As our Dread Lord Wrath has written (link below), we now have a new Ascendant fleet for Plagueis and thus Ajunta Pall and that is extremely exciting. Check out our assets when you get a chance (here and here ).

I will just say that I am having a blast in this Clan. I owe a lot to Clan Odan-Urr and Turel, but I continue to have a great time having moved over here. The entire summit and all the members are extremely helpful and friendly, and it has been a fun experience telling a story, helping lead, and getting involved. I hope I can continue with Laren and keep things running awesomely!

Post Scriptum: Have a great Christmas, New Year, and/or other celebration as a part of this Holiday Season!

In case you’ve been hiding under a rock, Plagueis is doing this little thing called “Winter Trials”, a series of competitions for the season upon which we are venturing now. You are duty-bound to complete as many of the tasks as you can in order to ensure our Clan and her assets are sustained and grown. The time has come to take pride in Plagueis and bring honor to your brothers, sisters, and leaders!

Here is a list of the parent competition and the Week 3 competitions that will be going on until Christmas day.

A few other competition items of note are below, including an excerpt from the Don’t Panic competition winner, Justinios:

As the start time to the meeting wound closer, Justinios recalled a piece of knowledge that was useful but he didn't like it. The former professor realized there was no other choice because his research depended greatly on this meeting. After taking a deep breath, he fully disrobed and confidently walked out of his changing room into the steaming sauna, with every bit of his blue body on display.

Enjoy the fun and games, provided by our Clan and many other folks around the Brotherhood.

I have the pleasure of announcing some awards given out, some of which you may be quite aware. But since Laren’s QUA report, we’ve had a few great things happen! 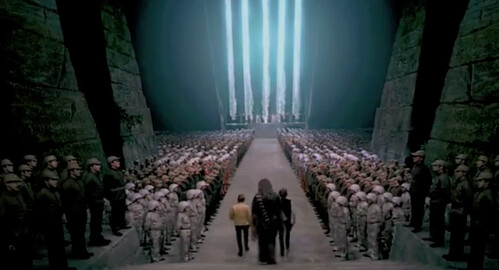 I know the last two are not in Ajunta Pall proper, but I felt like recognizing them anyways.

Plenty of goings on such as possessions and Hall of Justice and Shadow Academy. Those have all been announced for a couple weeks now, so I will just highlight a few items from Clan Plagueis and of more recent announcement.

So for my monthly reports I’m going to try something different. I will open up the day or two before my report (typically on the 20th) and allow people to give suggestions on something I should sketch using real charcoal. Folks can suggest a Star Wars scene or image of some sort and I will make a stick figure version of it in charcoal.

This month I received a few good responses (thanks Teylas and Silent) and settled on the one below from Abadeer suggesting, “Losing a limb.” I hope it is mildly entertaining in the least. 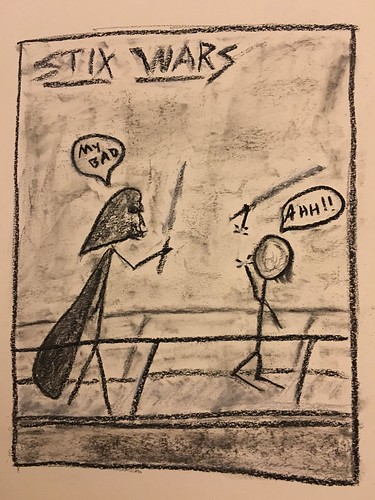 I am a big fan of Stix Wars, and I can't wait for next month!