What have we got here? We got ourselves a report! But what's there to say? We already launched Scenario Hall and got people pumpin' for that...then there was that whole Coach's Corner thing we announced so it's not another ACC event.

Well, at the very least, I come with a change (one of a few that I have been tossing at James to add to his list). It's a simple one, though it's actually two changes, but the one is more important than the other. In fact, the other can be tossed right here as a footnote! As of the last code deploy, ACC matches will have the per-post comments expanded by default, as opposed to the current collapsed view.

That's the stuff folks need to see anyhow, so why make an extra step necessary?

And that's all there is to that! Strap in cause you're about to see the minor, yet important, change that is the Advantage System and the announcement of team's for Coach's Corner!

And there's just one thing I have to say about this event:

So, there's one thing that's always been apparent to me as a competition runner in this club: if there is no score system then there can be no ties.

Seems simple, yet it can be confusing. A rubric system, often used for art and fiction in the Brotherhood, has an innate disadvantage in that it creates ties where none should exist. Yes, two members can score 4 out of 5 on the rubric, but still be standing apart. One member may have been just shy of a 5, while the other barely scraped past a 3. Yet, on paper, they are the same.

The goal of the Advantage system is to shatter the illusion of ties.

How Does It Work?

While there is no need to reinvent the wheel or drastically alter the rubrics we use today, a subtle change can make all the difference. After positing the idea and some back and forth, a formal proposal including an implementation outline was prepared, approved, and James did that voodoo that he do.

Now, in the ACC grading, when a category is scored as a tie, an Advantage comes into play. This is assigned to the member that performed better in that category and grants them a bonus to their score. A minor one, to be sure, but enough to break a tie.

This will grant more transparency to a practice that already occurs in the "Rule of Two". The standard process in a tie is to have a second judge look over the match (if one hasn't already during the review process) and give their own sense of which scored higher in a category. That is used to help push the judge towards their final decision. This check mark serves the same purpose, but for each individual category.

So, what's it look like? Here's a sample of the interface from a judge's side of things. 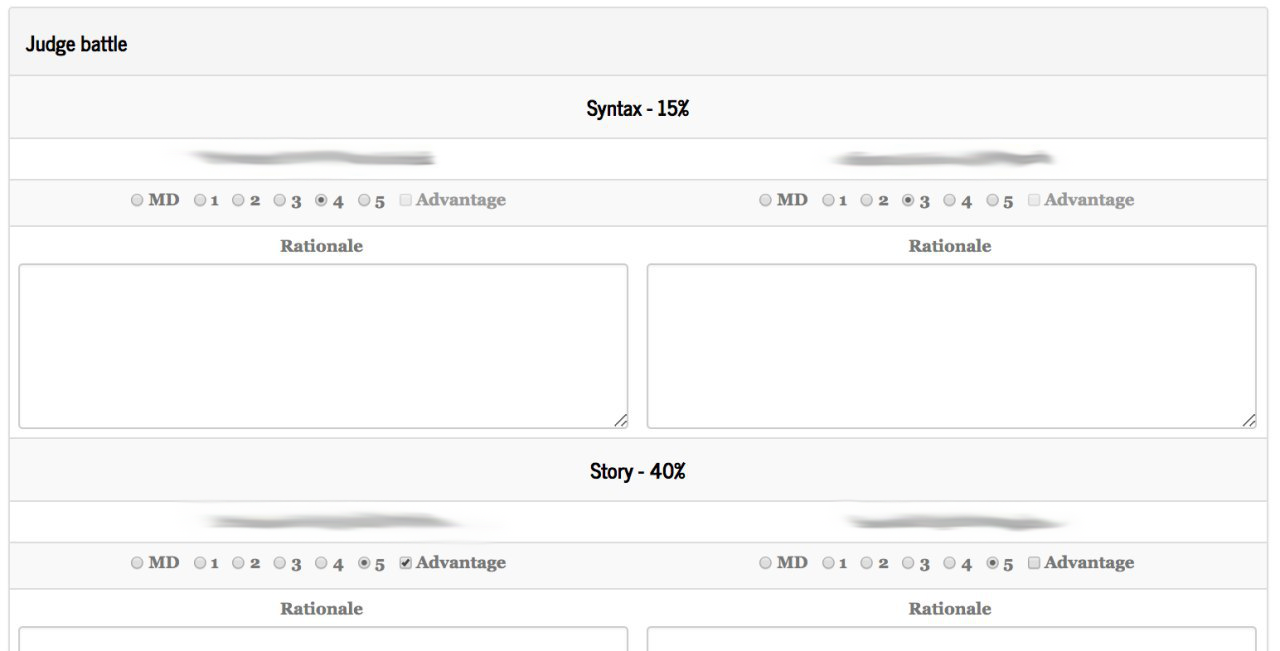 As you can see, it's a greyed out whole lot of nothing when not in play, but as soon as there is a tie...things get funky. And by funky, I mean a boolean state is toggled and they get enabled in the automagical world of coding.

That's neither here nor there and not what you came for.

So that's all there is to it. If there is a tie within the rubric, Advantage acts as a slight nudge to show and recognize better performance within that category. Hopefully, this all makes sense. I can, and always will, answer any questions.

This is it, people! The sorting hat is done! The goblet of fire has belched! I have tossed the names in a cup, shook'em all up, and threw it on the ground.

Below you can see the coach and the team members that have been sorted. Due to the number of members, two teams of 7 were formed and two teams of 6. There are no names...yet. Teams will have to come up with their crew monicker and it will be used by the hype machine that is me! 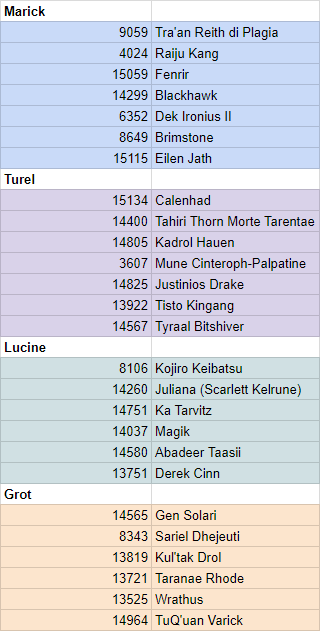 The composition of this competition will be an initial round where everyone faces one opponent. If there is time, and a member is willing, they may be able to do a second match with another opponent. A single match should take no more than 14 days to complete between the two members.

Each match will add points to the team's grand total, resulting in the final placements. As mentioned before, this is about teaching a group to work together and show that the ACC isn't always a solo experience. Yes, you are the only one writing, but you have proofers. You have people to use as a sounding board and can help guide you and answer questions. Learn to use the resources around you, and have a lot of fun. That is what is meant to be accomplished here, and the coaches are there for you.

Now, the coaches should reach out to you if you don't get to them first, so let's get to know each other before this begins. The tentative start is this coming Friday, the 25th of May, but I may push it back to Saturday so you all have time to get comfortable.

Remember, any questions on ACC mechanics, the CSs, or features, email [Log in to view e-mail addresses]. We do check this email, and often. Best way to get a proper response with all the staff on the same page.

Woohoo! My very own band of little murderers! Look at them go! We're gonna have so much fun together!

Good luck to all of you, darlings!

Don't take advantage of me Atra!

This is cool, good luck to all in this here event!

How will the teams with less players be compensated for their disadvantage?