Let's Get Ready to Rumble

I know, I know, all this talk about upcoming events can get rather repetitive, but it’s important. Things are really starting to ramp up for the upcoming Rite of Supremacy and I for one am starting to get really excited for it. While there’s not much to share on the exact timing and structure of the event (I’d expect Mav/Vyr to post something on that in the not too distant future), the story is starting to come together for it. Wally, lover of swords, has posted a rather intriguing (both in the descriptive and literal sense) fiction update that sets the stage for what’s to come. There’s also a couple related fiction competitons running here and here until the end of the month to get you in the mood. I really want to see a lot of participation from Plagueis in this event as we will be competing against other clans for, well, supremacy. More on this as it develops, but I expect that we’ll be ear deep in stuff to do by the time my next report comes out. Let’s get ready for a hearty competiton, much like this seal. 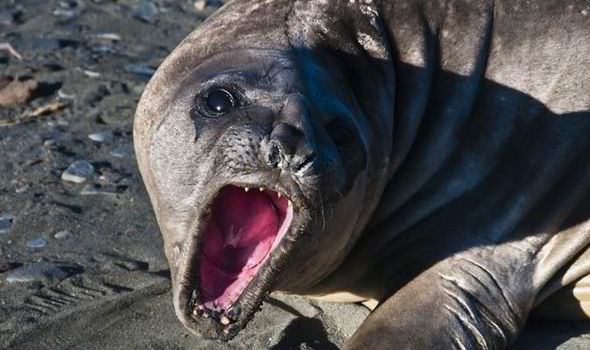 So as you know by now, we’re well into our third month of the Song of Discord run-on, complete with another competition. This one is focused not solely on word count but rather advancing the story. To sum up where we are, thanks to those diabolical Collective types, the conditioing on our slave population is slowly being compromised. We’ve noted a couple issues on that we’d like to bring up. Conditioning is not mind control and losing it wouldn’t necessarily cause a slave to become instantly violent. What we’d more expect to see is them beginning to show signs of independent thought. They might question an order or talk amongst themselves in ways they’d been conditioned not to. Could violence result, absolutely, but it wouldn’t be an instantaneous thing all the time. Now of course if someone were manipulating things...wait, no spoiler territory. Gotta stop.

In the end though, the story is what you all make of it. If you want your character to take a starring role, they can. You want to do your own thing, go for it. We’re more likely to feature people who interact with the main storyline more, be that coming to Ronovi or I looking for an idea or suggesting something that you feel could further the plotline in small or even tagental way. As I’ve said numerous times, we don’t have a set ending for this, there’s a number of ways to take this plotline. I want to be thrown for a loop with this thing, so if you have a wacky idea, bring it to us!

For those who don’t regularly hang out on Telegram, a little card game called Cards Against Humanity has taken up a fair bit of popularity among our members and some guests from elsewhere in the DB . We’ve even got a custom deck which we’re constantly adding to. I’m not going to link it here because it’s an NSFW thing, but if you want to add to it, there’s a link in Telegram or shoot me an e-mail. While for the moment we just play for funsies, I’m looking at making a competition in the near future where we play a game for crescents. I’m still working out the mechanics of this, but I’m at a point where I want to start gathering interest and possible times people could play so that I pick a time where folks are available. If you’re interested in a CAH event, please fill this FORM out.

There, there’s a GIF, you happy?

Closing Thoughts and Moment of Zen

This month has been a mentally exhausting one. I’ve been on a couple tricky projects at work that have been draining. On top of that, I’ve helped run two World of Warships tournaments, started planning for a convention, and all that jazz. It’s only been four months since my last vacation, but I’m beginning to think I need another one. Maybe a cruise this time? We’ll see. For our MoZ this month,I’m going to switch to our second favorite aquatic mammal with the adventures of SpyOtter.

RoS is gonna be LIT, dudes!

In case you've forgotten, all the reasons you should participate are in all my old reports. Although I'm sure TuQ will reiterate. Scratch that, Just read TuQ's upcoming reports.