Welcome to yet another Consul Report! I know you guys are chomping at the bit for these feud results, and good news! They are found below. Along with many other interesting and important things!

March has been a fairly quiet month on the club front. Following the new major fiction update in February, which included torching the Jedi and solidifying us squarely in 34 ABY (We are all so young again!), and the announcement of our new FIST. There have been a handful of important news items I want to cover.

First off, because I know we have quite a few members really into Star Conflict, there has been an update from the FIST regarding the group vs AI bot matches, which can now be reported in the PvE section of the gaming portal. There is also a small nerf to CF rewards given from some sections of Destiny.

Next comes some wonderful [eye candy](https://www.darkjedibrotherhood.com/news/reports-herald-report-12-come-with-me-now, courtesy of the ever talented Herald Staff! They bi-monthly updates will be replacing the large dump of items we’ve seen over the past years in the Herald Style Holiday.

There is also an update to custom weapons for the non-force users, in that you can pick and choose from options in any category vs just the options for the specific weapon when you request it.

Finally because the VOICE Staffer in me demands it, there is a awesome INQ society fiction competition running at the moment, letting you run as either a member of the Inquisitorius trying to stop the undesirables or as one of the Rebellious anti-Pravus genocide hoping to help them.

The man’s mask had dropped to the floor some time ago. Had he so much as blinked in the last hour? Judging by the ache in bones, it had been long enough. He blinked hard, relief flowing over the dry, gelatinous orbs he had been neglecting.

His eyes darted from one datafeed to the next, strained against the darkness of the ill-lit office. Each feed played and replayed instances of the utter chaos that was the feud. On every single available screen, he witnessed as the great Houses of Clan Scholae Palatinae clashed. A voice buzzed in the back of his mind.

Loyal to the last.

That one last word hung in Xen's conciousness—so familiar yet so foreign.

A buzz on his comm brought the world back into focus.

The words fell automatically out of his mouth. The door swished open on his command.

Light spilled into the room, outlining the tall, ghastly figure that stood in the doorway. The figure shambled forward before straightening itself. Light from the datafeed lit his grotesque, disfigured features. The man known as the Black Hand moved carefully. The repertoire the two men had been involved in for the last six months was a slow one. Indeed, the Emperor himself had visited this ghost from the past on more occasions than he cared to count. The newly appointed Proconsul was not about to look the fool before the man with a petty misstep despite his weakened state. Cyris Oscura turned his attention to the action on the datafeeds.

“Why?” Cyris asked, his deep, hoarse voice barely more than a whisper. The monosyllabic word hung in the air.

“There are the strong, and there are the weak. Those who hesitate, who waver… They threaten the security of what we hold,” Xen anwered slowly. Cyris let out what could almost be interpreted as a pensive, amused grunt.

“Yes… Yes, you are right. Enough for now.” Xen said voice trailing off.

The Zeltron poured herself another shot of Rancor Tequila. The skies above the quarry had faded from a dazzling display of color to a grey haze as smoke billowed out of a half dozen mineshafts. Somewhere through the billowing smoke lay the smoldering remains of a communication hub.

It wasn’t one she was familiar with from her time in House Excidium. Now an Aedile in Imperium, she felt something akin to regret that she had to face her former Housemates as a traitor. Or was it not anger that she felt? Shame? To think she shared a link, even a broken one, to these traitorous curs!

“Excellent work.” Lexiconus said, striding up to stand beside Blade. The sound of prideful greed dripped from the Quarren’s words. Yet another victory that secured his grip over this infallible web of power.

“It won’t stop them. They have a dozen contingency plans for communication, not to mention the data backups,” Blade said swishing the little remaining liquor around in the bottle.

“No, but if you want to bring out a pack of rats you light a fire and let them come to you,” Lexic stated, beady eyes reflecting the plumes of smoke.

Then came a sudden flash of static pain, followed but a strong buzz on their comm links. All around the system, every single clan member, man or woman, human or ewok was simultaneously given one unequivocal command.

The tension in the room was so palpable you could have cut it with a knife. Which was something that, by all appearances, many clansmen were ready to do. Silent glares and bared teeth were plentiful in each group lining the walls of the chamber.

Silence fell as Xen, shadowed by a hooded Cyris walked through the middle of the room to the elevated stage in the front. Those who had been part of the team that had captured Cyris in the festering stench of a nightmare that was Vanir II kept their eyes locked on the old man.

Xen took the steps up the platform two at a time. The Emperor pulled the mask from his face as he spun to face the crowds with open arms and a wide smile.

“Did you enjoy the game? It’s okay to admit it. All those years of doubt finally unleashed,” he began. The room remained silent. Xen’s expression changed.

“There can be no doubt!” he exploded, face red, fist beating to his chest with each syllable.

“We’ve all grown soft. Trusting. Friendly. Have you not seen what the Grand Master has done to the Jedi of Odan-Urr?! That is strength. That is POWER! The Empire stands only as long as we are strong. Trust. Friendship. Sentimental emotions have NO place here!”

Xen paused, sucking in air through clenched teeth as he scanned the room.

“But not all is lost… Look how quickly you acted. No hesitation. No questions. No lingering doubt. You heard betrayal. You believed. You acted without mercy.”

His eyes paused on the mass of House Excidium members. “Yet I must wonder if you really put all your heart into it…”

Without warning, Xen threw one hand forward and ripped one member out from the crowd.

“Did you not fear what would happen should you lose?”

There was a crackle followed by screams. Lightning all but swallowed Lucyeth as the man fell to his knees.

“Maybe the shadows are too comfortable?” Xen pried. There was another crackle followed by more screaming. The rest of the room remained silent, eyes locked on the Quaestor as he buckled and writhed in agony.

“But I am merciful,” Xen stressed as he lowered his arm to his side.

“Our enemies may hide within these very walls… But there are more out there! Of THAT you can be certain!” Xen screamed pointing up at an angle.

"We are at war. Every day. Every FUCKING moment. Never forget that!"

Without another word, he jumped off the platform and marched straight down the chamber.

He paused before exiting. He did not turn. He did not so much as glimpse over his shoulder.

His words echoed through the hall once more as he roared at the top of his lungs, "NEVER FORGET THAT."

I know this is the bit you guys actually want, so here it is!

And finally, with a total of 1,330 points earned and an incredible 2.44 participation ratio, the winner of Subterfuge is House Imperium.

As announced earlier in the month, we have a new PECAN!

Cyris Oscura had a fantastic application and has already dived straight in with a lot of different points for the clan, ranging from Subterfuge help to input on how to better position the clan fictionally. We are planning to have a joint fiction come out giving a bit of the fictional set up for his move into the position of Proconsul, but in the meantime, he is very serious about looking out for the best of the clan!

Obviously, we’ve had the house feud to propel us through the month. There were a lot of really quality submissions that came into this one. I hope you all enjoyed participating, and are gearing up for our upcoming feud with Naga Sadow! Everyone will need to be on their A-game to come out on top!

That brings a close to another Consul Report guys! No “Ask the Xen” this time. I wanted to get the close of Subterfuge out as quickly as I could. I am of course always available via email/telegram for questions however; and if you haven’t joined us in the CSP Telegram Chat group please do! You are missing out on a ton of fun. As a final parting piece, courtesy of Zehsaa’s mad art skills, and Elincia’s quick photoshopping, here is an image of the full ‘Mini-Me’ CSP Summit! 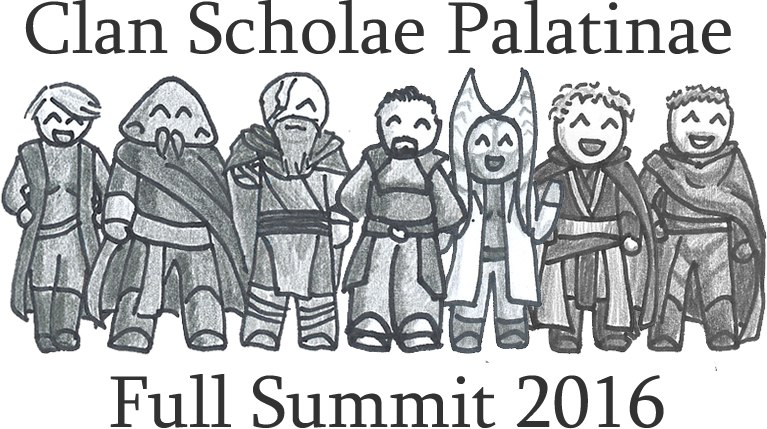 Wahoo! Great report, great feud! Well done, Xen. Congrats to everyone, both those that placed and those that participated. That was a lot of fun, and I genuinely can't wait to see what happens in the next CSP event.

For the Empire! :D

That Summit-pic gave me a chuckle. Nicely done!

Great work everyone. This comp was way fun.

Good times. I enjoyed the activities and CSP really has shown the talent has grown so much and continues to grow. Quality over quantity, and man these folks showed it. Good job to Excidium. You guys dusted us the last time, had to bring our A game this time.