Welcome to our first part of results from Great Jedi War XIII: Discord! In this post, we will summarize our progress on results, list our members hitting every bin, share some observations from the Dark Council, including neat entries from our initial checking of submissions, and conclude with current participation values across Clans.

Next week, we will have full results. The majority of competitions in Phase I and Phase II are graded. A few of our team competitions are taking a bit longer to grade, but we are still hoping to have full results out next weekend. Participation is largely done - save for the participation bonus based on unit size from 'ghost members', as I mention below - and we've created the initial list of members that participated in All Bins. We're distributing a spreadsheet on a per clan basis over the next day or two, so Consuls can review their members participation and confirm we have everything right.

Members That Did It All

We had a whopping 41 members participate in every bin! This is an incredible number and we're extremely excited to see how competitive the event was. These members will all be featured in GJW fiction as possible. We have broken this list down by Clan, below. Please join me in congratulating all of these exceptional competitors!

Finally, we had three members - Bentre, Declan, and Kalan Amak - participate in all 32 competitions. We never intended for members to take on this feat of strength, and while this particular accomplishment carries with no special perks, we still wanted to highlight such an exceptional effort.

We have a few highlights from the Dark Council as we dig in to our grading.

First, let's start with the breakdown of objective choices of members in Fiction I and Fiction II:

We had a relatively even split on choices in both prompts and it gave the graders quite a diversity of fictions to read. We know some members had difficulty in picking which prompt because of the potential story implications, especially in Phase II, but we were excited that there was some investment in both wider plot outcomes and fictional prompts themselves. Wally will have more details on this after the War is done and we've finished up the fiction, but we're excited to see how the relationship between the Principate and the Clans will continue to develop in the future!

Dark Council graders wanted to share a few entries to competitions that caught their eye - we'll have a few more with the final results, as well. These submissions are not necessarily the highest-scoring entries to their respective competitions, but were noted early on in grading as high quality and something worth sharing with the club. We're hoping to do something similar for the final results post, as well.

From Alaisy, an excellent rendition of the Collective's false-flag attack (shrunk for news post): 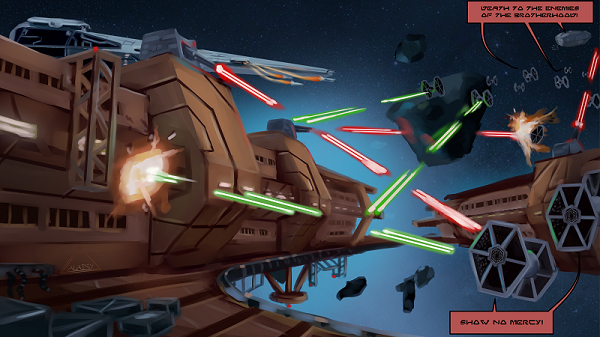 From Justinios comes an excellent meme, from Mav is old and Hates Gifs: 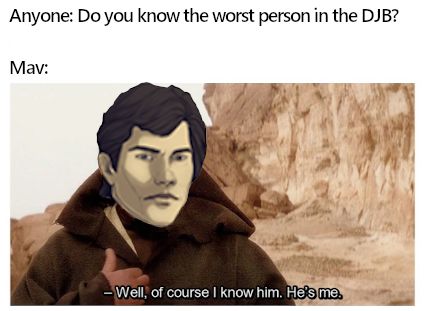 And finally, Declan went above and beyond in his submission to New Acquisitions: 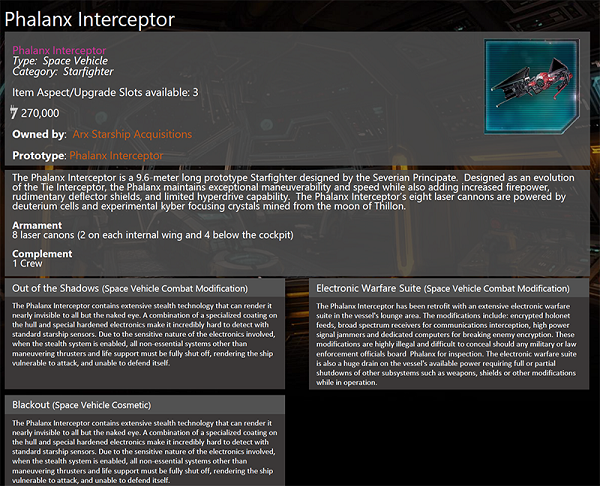 And now for the initial Participation Results from the War! Below we present the first point totals for each Clan, drawn exclusively from points earned by members through participation. To ensure that our numbers are accurate, we are also passing out the participation spreadsheets for each unit to Consuls. We will also provide final results spreadsheets to them as well, as the end of the War.

So far, we have an tight race for our Clan Titles and we are extremely impressed by the effort across the Brotherhood, with numerous Clans in striking distance of First, Second, and Third Clans. This is truly a War that looks to be coming down to the placements in every last competition!

In looking at Clans relative scores, please keep in mind two very important factors: First, the participation bonus (so called 'ghost members', which addresses differences in unit size for participation alone) has not yet been applied to units based on roster sizes and participation. Second - and more importantly for final scores - the points from participation are worth one fourth of the total points in the event. The points separating our top units could be bridged with a handful of placements, as some placements are worth hundreds of points! While participation will make a difference, the tight race for First Clan won't be decided until our results are complete... so stay tuned!

Over the next week plus, we will continue to release the Great Jedi War results as described in our initial timeline. We'll keep you updated to any delays, but we are currently on track for our original release date for results, so hopefully that won't be necessary.

You'll hear more from us soon,

Woo congrats all, especially Overlord Benny and CNS, and well done everyone overall!

Great job everyone! I love how tight the race is! Good luck to everyone with placements.

Man! Those are some insane participation numbers. Well done, everyone!

Impressive DJB collective effort! Big thank you to Mav and Team DC for working hard to bring us timely and quality phased results!!

Now just to wait for the rest.

Thank you for the feature! Impressive numbers