The following newspost will serve to help recap the latest chapter fiction update, answer some questions members had with competitions, and catch any post-launch errors that pop up because the Dark Council is human.

This is going to be a light recap compared some of my other summaries. This is intended, but clans are free to use this recap as a way to help new or returning members understand what’s going on in the story.

Location 3: Salvage Station at the Shipyards

On the fictional background of the War:

From the Grand Master:

In past Wars, we have forced all of the Clans' fleets into a single system for one reason or another. This War is meant to be different - only some of your forces are likely to move on Lyra, and that is, in large part, a call the Clan makes fictionally and can work into their own fictions and run-on. Regardless of how plausible you think the scenario is (this is Star Wars ;) ), here are a few additional details :

1) The Collective is not shutting down all communication in and out of Lyra. They would actually love if the entirety of the Brotherhood showed up in the system. They are more than willing to cause communication blackouts where needed to achieve their objectives.

2) Speaking of the Collective objectives - they are largely similar to the Brotherhood. They see Lyra as having valuable assets they can seize, while blaming the Brotherhood. They also would welcome a demonstration to the Principate in what Force users are really like, by inviting chaos into Lyra.

3) The Principate has only the 5th Fleet in system (https://www.darkjedibrotherhood.com/items/65222-item-container). The Principate are unlikely to reinforce the Lyra system immediately beyond that fleet, but things can change depending on what members do in Fiction I

Right. So the Lyra system has a lot of targets of value, but outright war with the Principate would be bad for the Collective and the Brotherhood. The operations are smaller in scale this war than in the past. We are not laying waste to Nancora or sieging an ancient Sith world. Instead, the Brotherhood is engaged in smaller-scale confrontations across the Lyra system.

The overall theme of this war is diplomacy and how fragile it can be. The “War” element refers more to the nature of the scale than it does major battlefronts where armies clash against armies. This war is about information operations, and how the very notion of peace can become an antithesis for war. The goal of the war is prevent escalation, and there are many ways that can be explored. How the war progresses, ultimately, will be determined by you, the members, in how you vote on the different objectives for the Fiction I competition.

Question: Why are the Clans involved with the predicament that the Brotherhood has found itself in?

There a few reasons here.

Question Why are the clans not bringing all of their ships and fleets?

As a reminder, if you notice any mechanical or technical errors in the NPC Character Sheets, Wiki documentation, broken hyperlinks, or you need clarity on a prompt /rule, please make sure to email the respective competition organizer. If you’re unsure of who to talk to, your best bet is to email the GM ([Log in to view e-mail addresses] ) and DGM ([Log in to view e-mail addresses]).

Question: Can we have other members proof read our entries for the GJW?

Members are allowed to have any entries that require written word to be proofread by others. This is strongly encouraged, actually in events like Fiction where we grade partially on syntax. You just want to avoid letting others re-write or write your entries for you.

We are aware of the efforts of members to help each other in revising and polishing submissions. It is not against the rules to have a submission edited for grammar, spelling, and basic story comprehension. It is against the rules, however, for an editor to engage in wholesale rewriting of sections or to otherwise alter the submission to make it anything but an individual effort. This applies as well to run on posts that are created off-forum in a collaborative document. Be honest and be fair.

Make sure you check out Bubba’s GJW Report please remember that if something feels like it’s shady, or a violation of the CoJ, it probably is. It never hurts to ask a competition organizer a question (through email).

Question: Does the fiction have to be entirely based in Lyra-3K-a

As long as you can engage with one of the objectives it could be fine. We're not necessarily sure that's going to be possible if the story is set entirely outside Lyra-3K-a, but that's up to you as a writer to try. As long as the prompt is being used for the narrative of the story and taking into account the political tension established by the War's storyline, you should not have a problem.

The Great Jedi War XIII Wiki page is your one-stop source for information. Fictional summaries will be organized here, as well as a list of locations, persons of interest, and links to any news post that we push out during the course of the event.

You can find a list of Bins, and their respective competitions here.

Theaters of war have been detailed and can be found here.

The Wiki lists out the different theaters, and also has links to the sign up form, and the selection form.

I’ve created a section on the Wiki that should act as a cheat sheet for the NPCs used and utilized in the Fiction Updates or prompts. You can see it here. 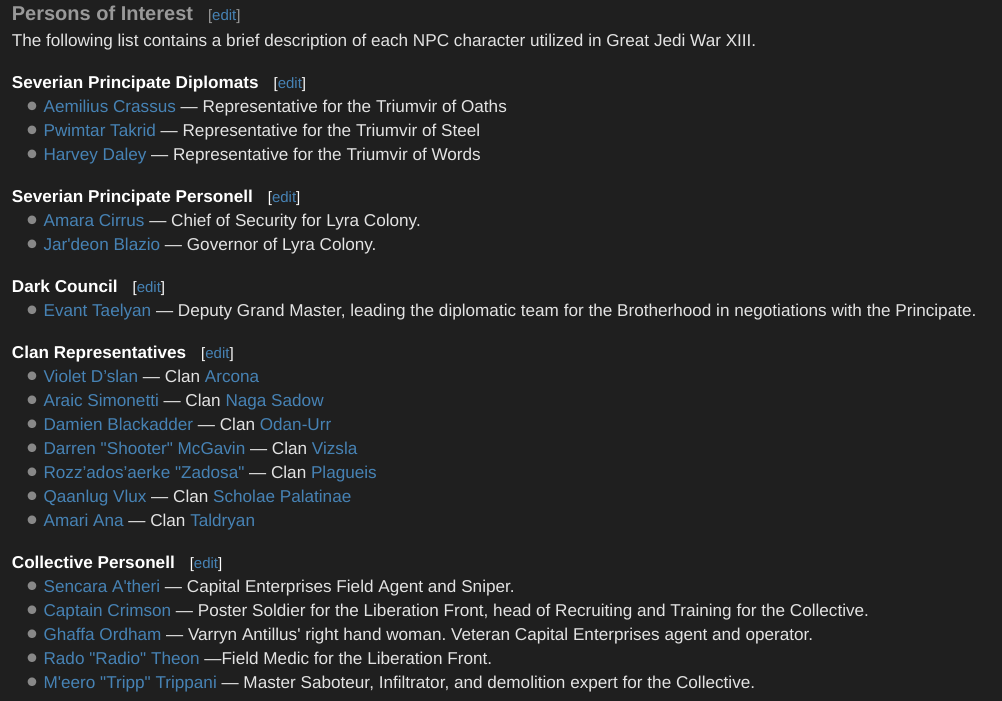 Some quick hits before signing off:

If you have any questions, please reach out the Dark Council through email. That will remain the best way to get answers to your questions :).

I mades you an NPC, Wally! Nice recap.

Thanks for putting this together.