The seven Brotherhood representatives walked in step with the Deputy Grand Master as they crossed through the airlock between the two docked imperial corvette’s. They were greeted by a line of stormtroopers with regulation rifles and sidearms but with an added Z6 Riot-baton on their hips. While nothing like the First Order’s Praetorian Guardsman, these troopers were most likely trained to “handle” Force user opponents.

Evant didn’t blame them for being cautious. It wasn’t every day an organization run by Dark Jedi showed up to negotiate alliances. No pressure.

Before they could enter the room, the captain of their stormtrooper escort—distinguished by her blue shoulder pad—held up a hand to signal a halt.

“I’m sorry, Master Taeylan, but we’re going to need you and your colleagues to check your weapons." The Brotherhood representatives all exchanged glances, but complied. Shooter calmly handed over his blaster pistols, making explicit eye contact with the trooper who took them so that he knew who to hunt down if anything happened to them. The rest seemed to part easily with what they had. Evant looked thoughtfully at his lightsaber and sighed before handing it over.

The last person in line nervously held out her datapad as an offering to a nearby trooper. Violet had not brought any kind of weapon, but wanted to try and fit in with everyone else. The stormtrooper tilted his head slightly but waved her past, more interested in her tinted glasses than her harmless datapad.

Once inside, the Brotherhood representatives finally met their counterparts from the Severian Principate. Pwimtar Takrid—the Quarren representative for Industry—shook hands with the Deputy Grand Master. Aemilius Crassus—the Munn representative for Social Administration—exchanged polite pleasantries and gestured towards the center table. Last came Harvey Daley—the human representative for Galactic Diplomacy—who did not shake anyone's hands but offered acknowledgment in the form of smiles and head inclinations.

The room was impressive, to say the least. Aside from the guardsman posted along the perimeter, wait staff began to pour refreshments as each of the eight members of the Dark Brotherhood were shown their seats. The Principate delegates took theirs in turn, leaving two chairs open.

“I don’t mean to be rude, but are we waiting for anyone else to join us?” Evant asked as he studied the glass of blue liquid that a staff member placed onto the table beside him.

“Oh yes, my apologies, Master Taeylan,” Harvey Daley bowed his head. “I was contacted by an old colleague of mine who says he had a vested interest in this meeting and thought it would be profitable to share some new information he’s discovered that should factor into these discussions.”

Before Evant could raise his blunt concerns, the doors opened and a lean man with dark ebony skin, gray combed back hair, and an eyepatch entered the meeting room. Evant recognized him and his guest immediately. Evant kept his expression neutral as he leaned on the Force course through him to steady his nerves.

This can’t be good.

“Hello there,” Varryn Antillus greeted the room with a warm smile. The leader of Capital Enterprises wore a fine tailored long coat that seemed to be a mock of Evant’s cape. Beside him, a pale, sickly looking human with messy white hair and hollowed eyes was staring eerily at the Deputy Grand Master with a noticeable frown. The man was Rath Oligard’s Chief Counsel, and a rumored Force Adept by Marick’s first-hand reports.

“Thank you for having us,” Varryn grinned. “I believe we have much to discuss.”

The Deputy Grand Master has assembled his team of diplomats that represent each of the Brotherhood’s seven clans. Their destination? The Lyra-3K-a star system to meet with diplomats from the Severian Principate with the hope of forging a mutually beneficial alliance between the two powers. While the Iron Forces make their way towards the locations of interest, however, the Collective makes a bold move to disrupt diplomacy as discord looms on the horizon. 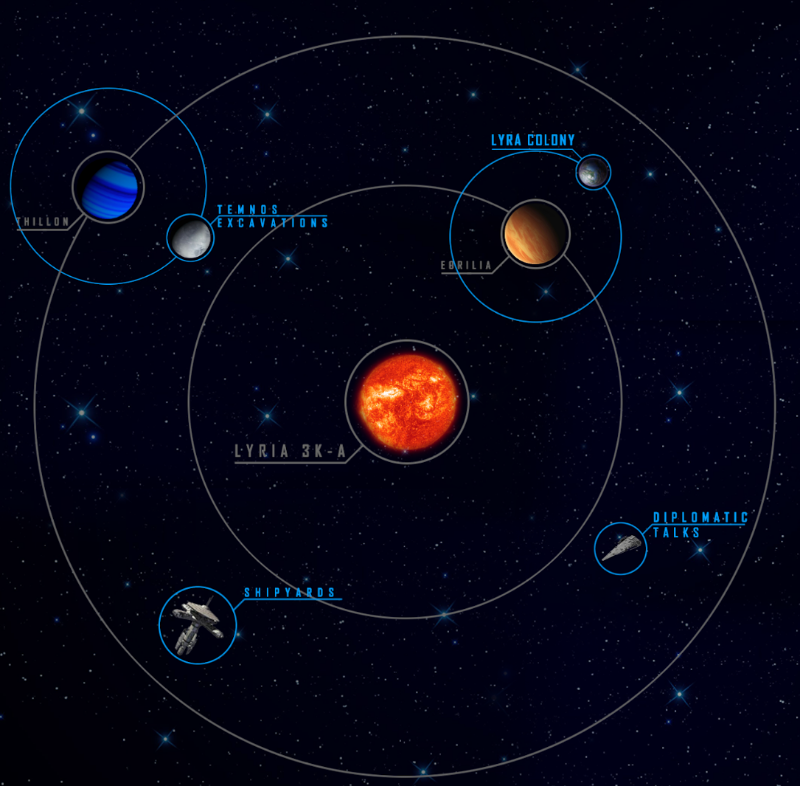 As you can see from the title, we’ve decided to call the Thirteenth Great Jedi War: Discord.

More details about the War will follow in the days to come. Keep your eyes on the Newspage ;).

For now, enjoy the fiction and please support the official release.

thank you for this update Wally!

Brainwashed pilots? Disguised capital ships in the hands of dissident elements during diplomatic meetings? Surely nothing will ever go wrong here!

First of all EAT BRICKS I'M NOT SHORT.

Secondly, really cool to see Violet and all these NPCs. Want more of the story. WAR HYPE.

Thanks for the work and summary, Wally.

Well this is certainly going to make things a bit more...interesting

This is gonna be an awkward meeting.

I'd love to be in the room! I could just imaging twiddling my thumb's as negotiations begin breaking down. "So... This was fun?" As death happens around him.

"We also don’t want to tip off the New Republic that we have a bunch of fleets controlled by space wizards hiding in the Unknown Regions."

Probably my favorite line in any report lol

Lovely fiction, really good job on the team of diplomats! Thanks for the wonderful update Wally!