Footfalls thudded through the umbral halls of the Darkest Night, resounding as their rhythmic drumbeats heralded a procession, a movement, a change. They were something active, something shifting. They were music made of a harmony of heavy tromping and a melody of half-dancing steps, and their song sang of a new day.

“Take care of the House. I’ll be back soon.”

LOLjk. No fifty page report fictions. I love you special snowflakes. I wouldn’t torture you that way.

But first, enjoy your monthly dose of news! And by enjoy, I mean read, or I’ll cut you. :D

There’s openings everywhere! And I don’t mean in your mom, for once!

In case you haven’t checked out the newspage lately (GO READ IT YOU LITTLE--I mean, what?) there’s been quite a bit of upheaval. Most importantly, our MAA Kalen has stepped down. Expect some changes around the Master-At-Arms office once a replacement is in order. Or, hell, implement your own! That’s right. The office is open for application, so if you’re really interested, I encourage you to apply by tonight--it’s short notice, but it could be done.

Alternatively, if you’re itching to try your hand at some leadership time, I encourage you to consider that both Naga Sadow and Tarentum have some openings at the BTL and AED level. I also encourage you MOAR to check out our dear team Dark Forge, which still needs a BTL. DF applications will be open until Saturday night. Email Stu and I as well as Wally and Legz if you’re interested.

I know you guys just want to see the shinies listed around your name and not read this, so here you go. Stay beautiful, work hard, get laid:

We’ve had two DJK promos this month so far! Dark Jedi Knight is always an incredible milestone, and displays hard work, a sense of community, and dedication. I’ve still got my own DJK recc starred and saved--I read it when I’m feeling down sometimes. So for you guys who’ve just gotten it, and everyone else who’s ever reached it, and everyone who writes those promotions and fictions: it means a lot. Treasure it, and congratulations. ;)

I appreciate the fact that you guys can be incredible workhorses and still give my hands a break once in awhile. You’re all so fantastic. <3 Feast on the featured fruits of your labors:

We’ve have some come, and we’ve had some go. But wherever we are, all of us who have known Arcona will always be Arconan, and this will always be their home. (Woohoo, sentimentality!)

Welcome to malchius, and goodbye for now to Uji.

Shown below you will see the spectacular successes of the scions of these societies and their simply splendid struggles for self-improvement: Sensational, my good sirs!

(...and ladies. There isn’t an s-word for us chicks that I can use that isn’t in another language. Boo. <3)

Want shinies? Want to be sexy? Want to have some fun? Do these things! (Or, more typically: check out these comps and get some rewards for your hard work!)

Or, “Ask the A” as it turned out to be when I screwed up my IRC nick. However, I stand by what I say:

“<@Atty|AsktheA> I will put literally anything in this report :P”

A: You can have a direwolf.

Xath asks, “Can you give me Wally?”

Mark asks, “Will Stu mind if I borrow his BAC?”

A: Yes, he will. However, I will not--provided that we pick up hookers on the way.

Wally asks, “What has been your favorite part of being a part of the Arcona Summit?”

A: Uh, don’t say the pay grade. They’ll find that insensitive. Use humor! Uh, um...oh! I know! Fuck bitches, get laid! Yeah, that!

No, in all seriousness, my favorite part of working on the Summit is the people. Sometimes we disagree and argue and get on each other’s nerves. Sometimes, “mommy” and “daddy” start shouting over my head. Sometimes, I feel like slapping my fellow Summiteers until they all play nice. And sometimes, I'm the one acting awfully. But you know what? In the end, it’s all because each of us wants to do best by our members, by each other, and by the Clan as a whole.

The thing is, everyone’s different, so we’ll all have different ideas of how to do that, and sometimes those ideas clash; but at the end of the day, on this Summit, we all walk away in agreement, joking, laughing, glad to be working together. I joined the db because my friend Nath wanted me to--I don’t even like Star Wars that much (WHAT? BLASPHEMY). I stayed in the db for everyone I met and got to interact with on a daily basis. All my closest friends are here now, as both members and leaders. To be able to work with them, or work to reward them, or look out for them? That’s the best part of Summit life.

Wally also asks, “Is there a moment, in your time as Aedile, where you saw something happen within the club that affected you in a positive way in your real life?”

A: Actually...yes. Plenty of times. I could name a couple specifics, things like the leadership experience making me a more confident and able person in general (you can’t list this stuff on your resume, but hell if some of the people skills don’t transfer over). However, for a more specific example…

Every single time I’ve gotten to write a promotion or medal recc. Sometimes, the gratitude is more obvious than others, and sometimes it’s a quiet thing, but it’s always there. And no matter what shit is going on with real life, seeing people happy about those achievements and about the things you’ve said for them, hearing them say thank you...it’s the best thing. Brightens any day.

Wally asks, again-again, “Will you ever give up in the pursuit of my sister?”

A: I think anyone else who’s seen WallyCat can echo me here: no. Hell no. We’re meant to be. She’s a cat, I like cats, duh. Don’t you see the chemistry?

Esca asks, “Will you drive me down a cup of chicken noodle soup?”

A: No. I like ligers. Be ferocious, you majestic beasts.

Mark also asks, “How does Atyiru feel about the recent news that Kooki broke (read the SF RO :P)”

A: This is me rolling eyes I do not have. Synopsis or gtfo. :P

In seriousness, though, if Atty’s apprentice was preggers, she’d be ecstatic and protective and ecstatic again. Families are very important to Miraluka, according to my headcanon, so yeah. She’d probably establish herself as the kid’s godmother and teach it to troll Uncle Marick.

Wally asks, “How are baby formed?”

A: When a mommy rancor and a daddy rancor want to bang very much...er, I mean...they cuddle. Yeah. Cuddling. That’s how babies are made. /me pats Wally

Mark asks, “(My standard one these days) - number of your youngest available female relative?” 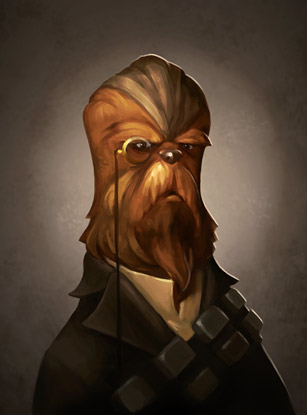 Your report has more in it than the joint reports... I approve.

No better example than one you experience for yourself.

While ligers are cool, tigons are clearly cooler and even they are beaten by titigons :P