Before we begin this month’s report, let me just say that I’m sorry you didn’t get a report last month. RL got busy and I lost track of time. I’ll endeavor to prevent this mistake from reoccurring in the future. In the meantime, we have a ton of news to go over and a few things on the horizon for Clan Plagueis and House Karness Muur. Read on and get ready for a new year of improvement for the Brotherhood.

This month, the news focuses more on quality than quantity and constitutes a pretty large cloud of bad with a silver lining of good. Though the recent past involves one of the worst things that can happen in Brotherhood news, there is hope and a bright future to look forward to. Keep your spirits and your heads held high as you step into the new year.

Finally, I’d just like to announce that Azmodius, Teylas, and I are running a mini-event starting January 7th of 2018! Clan Plagueis is preparing to take a little vacation and our infinitely wise Consul Selika Roh di Plagia (AKA Slagar, AKA Slaggles) has decided to let Furios choose the destination. It is, as of yet, a secret but I can assure you that it will be unlike any other vacation you’ve ever taken. This event will run for two weeks and feature a myriad of fun, easy competitions with which to wind down after the Great Jedi War. Stay tuned in to both the clan reports and [Telegram channel - Log in to view join link] for further news and details on the event.

It’s always a heavy blow to see any unit in the Brotherhood close, but it’s especially upsetting to see a clan dissolve into legend. Clan Tarentum has a rich history but that particular book is closing now and if there’s one thing I’ve seen of Brotherhood units, it’s that they never come back the same. A majority of the former Tarenti might get together with some fresh faces and a renewed vigor to run an active unit in good standing but the name always changes. Tarentum is history and we’re all sad to see it resigned to the wiki pages. The silver lining here is that a number of Tarentum's members have moved into other clans including our own. Welcome them with open arms. This is a Brotherhood after all.

Now what does this mean for the Ascendant Clan? Simply that we’d better keep an eye on ourselves, on our backs. It’s all too easy to fall into a pattern of idleness in this club and if enough members of a unit do so, having a big enough roster won’t be enough. Tarentum had 53 people when it’s closure was announced, almost a dozen more than we did on that day. I don’t want to scare anyone, after all, I doubt the DC wants to close two clans within such a short timespan of each other, but we could be next if we’re not careful. The summit may have dropped the ball on certain aspects of the Great Jedi War but we’re doing our best to make sure that doesn’t happen again. We’re the clan that has always proved its worth despite the small roster. We’re the clan who kept itself open through nothing but sheer willpower and activity and I’m proud to be a Plagueian at all, much less a Quaestor. But somewhere along the way, we’ve lapsed a bit. The way I see it, we’ve let the desire to compete well overcome our unit’s social value and so we forget about the club between the clan’s regular events and it becomes difficult to get back into it when the next series of competitions comes up. As many of you may have noticed, I hosted a HKM Quaestor Skype Chat this past Saturday night. I intend to keep these going every two weeks as part of my campaign to keep everyone interested in the club on a day-to-day basis so it’s not so difficult to get started when the clan is being attacked by a horde of subterranean droids or butts heads in a clan “sporting event”.

As you are all no doubt aware, Star Wars Episode VIII: The Last Jedi has been out for a few days and it’s a mad dash to see the film as soon as one can all whilst avoiding spoilers. I was going to wait until the 25th to go see it but fortunately for me, my fellow summiteer and RL best friend Azmodius took more initiative and got me to go see it with our brothers this past Friday. We all arrived like an hour early expecting a fight for seats. We were quite wrong and ended up being the only people in the theater (you can check out our group selfie in Az’s report) so we spent our remaining time at the bar. 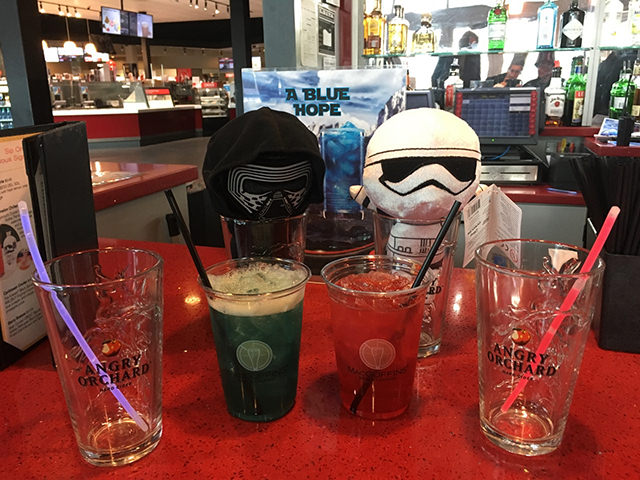 December is always a good time to reflect on the past year. The Brotherhood has spent the last month recovering from GJW XII and no clan has more recovery to do than Clan Plagueis. We’ll do better next time. Until then, stay active and keep in touch. Next month, we go on vacation!

See you next year!

Noice Report! A Blue Hope was better than Revenge of the Sip.

Great report, Furios. As you said, it's sad to see a Clan go, but anyone from Tarentum will find a welcome home anywhere they go, I'm sure of it. I hope that this does bring some renewed life to Plagueis as well. Tarentum was my first home, but I hope Plagueis remains my final one!

I'll definitely be diving into that competition, too. I'll bet you take on an inexpensive "staycation". :P

I swear if it's Dagobah I'll... have to buy plenty of hair products. But I'm sure while it'll be no Varykino estate it'll be worth going for the comps.

I still remember the Plag/Tar event. I didn’t meet many Tarenti per say, but I got the chance to enjoy learning their clan’s culture. As sad as I am to see a clan go, I know that those who have come to Plagueis will find a second family ready to welcome them and show them a new journey filled with excitement and prosperity. Here’s to new friends, and warm memories.

I'm just glad you didn't have to wait until the 25th to see the movie. Dear Plagueis on high that would have been one heck of a wait.

As always, Furios, graceful words and an excellent report.

Oh lord, Furios in charge of our travel plans, what could go right.

Nice Report Furios. Congrats Silent and Kultak on the promos!

As long as we don't do to Tatooine or Jakku I don't care where we go. I just don't like sand, it's coarse and it gets everywhere.

Thanks for the words about TAR, and thanks for giving us a new home. May our example spare others the same fate!