Greetings to all Odanites, our allies, and our enemies.

As you all know, the Rite of Supremacy is upon us. Read on to see how this affects Odan-Urr fictionally and, more importantly, how it affects you as a member. Additionally, you should expect parts 2 and 3 of this report and the accompanying fiction as the RoS moves into phases 2 and 3.

But first, the story so far.

When we last left off, things were a bit of a mess. The Vauzem Dominion launched a surprise attack against the legitimate Vatali government, and thanks to some sick pro tips from an old enemy, they managed to pull Odan-Urr right into the middle of things. Empress Kaltani was poisoned and Alethia appointed Regent until she regained consciousness. Needless to say, this has not gone over well with the stodgy Vatali nobility.

Meanwhile, the war between the Collective and the Brotherhood has continued to run hot. Faced with the realization that the Dark Council needs solid intelligence more than it needs a secret police force, Marick began to reorient the Inquisitorius. The Collection, for its part, continued its surprise attacks on Brotherhood assets despite the valiant efforts of senior citizens. Speaking of best efforts, although Grot tried to prevent it, the Collective captured Vance Kordall, an agent of the Arx Capital Exchange, along with an artifact of unknown power and purpose.

And the clans, of course, have their own problems.

Deputy Grand Master Morgan Sorenn believes that Vance and the artifact have something to do with the last transmission of a destroyed Inquisitorius listener ship, the Psi Termina I. She doesn’t know exactly what’s going on, but she’s going to approach this problem in classic Sith fashion: by kicking the shit out of people. And this time, she’s calling in the cavalry.

Fiction: A Position of Strength, Part 1

Alethia studied the faces across the table. Ta’var was biting her lip in concentration as she read, doubtlessly working through the various analytical techniques Archenksova had taught her over the preceding months. The other face was alien and nigh inscrutable. Essik Lyccane’s huge insectoid eyes seemed to be focused everywhere at once, though she could only assume his attention was on the datapad in his hand.

And if, somehow, his species could focus on a dozen screens at once, Alethia would be envious. The room’s ornate furniture, carved by master artisans from the trees of a hundred exotic worlds, had been shamelessly shoved aside to make room for more workstations and safes. Secure terminals connected to the Vatali Royal Guard’s networks, to the Odanite Expeditionary Force’s systems, to SeNet. Their screens displayed dozens of after action reports, many of them describing skirmishes between the actual OEF and hostile forces in rough approximations of OEF uniforms. The disguises didn’t hold up to close scrutiny and there hadn’t been any instances of friendly fire—yet. Nevertheless, the population of Kiast was rapidly learning to associate Odan-Urr with danger and destruction.

Continue reading part 1 here, and then tune in next time for the adventures of Jael, Ethan, and Mauro in the mean streets of Kiast.

There are only three bins in Phase 1, which makes it easy to get full participation. So easy, in fact, that Blade and Ji managed to do it the night of launch. Unlike the GJW, where the scoring system emphasized placement, the RoS will emphasize participation as the main factor. To put it bluntly, if you want to hold on to that First Clan reputation, we all need to show up. The other clans won’t make it easy on us.

Remember, you only have to do one competition in a bin to get all the participation points for it. In addition to giving us points, participating in bins will get the clan big money that we can use to buy you new toys.

Fiction and Graphics are in a single bin this phase, which might cut down on how many token entries you end up doing. For graphics, you have a variety of objects you can draw. Fiction likewise has three objectives so you can choose whichever one you like best. Entering either of these earns 4 points and, for those of you angling for a Hero title, between them they account for over half of the placement points for phase 1.

Gaming is a bit unusual this phase. Your first option is a solo Overwatch comp. If OW isn’t you thing, there’s a mobile game as well, in this case Galaga. Entering either of these will net you 2 points.

My favorite bin, Miscellaneous, comes with a puzzle and an SA exam this time. The latter covers all of the fiction from the Collective arc so far, but the comp write-up comes with handy links to everything you need. Either of these will net you 2 points.

If you do all three bins, you get an additional 3 points.

Phase 1 ends October 22. That’s enough time to do a sketch, a puzzle, and a mobile game, I think. In addition to Blade and Ji, as of this writing Kris, Mauro, Juna, Nero, Turel, and Creon have full participation for Phase 1. Val, Jack, Sa, Tarvitz, Dral, Tyraal, and I are 2 for 3.

There are also four event-long bins. Note that there are gaps between the phases, which gives you some dedicated time to work on your event-long comps.

Gaming gives you the option to do Diablo 3 rifts or any PvP platform, although you can’t play with another Odanite. It’s too late to sign up for the brackets now, but everyone wish Tarvitz, Blade, Creon, Juna, Turel, Kris, and Sarin luck in their matches. Any of those comps will earn you 2 points.

Graphics and Multimedia pairs your leet art skillz with text, audio, or video. You have the option to make propaganda or a comic for 5 points. Both of these can be done solo or with up to three friends. I strongly encourage you to ask around in the COU War Room.

The Team-Based fictiony-type bin has two comps, both of which require you to work with other people. You can create a new Collective faction in a team of 2-4, or do a fiction in a team of 3-5. We’ve been calling this a run-on, though this is a little different in that your team needs to finish the first objective by October 28 to move forward for placement. If you want to be on a team and you’re not already, hit us up in the War Room ASAP.

The Miscellaneous bin has three great and novel comps. The Cantina Quiz has you identifying bits of the official soundtracks based on short clips. Propaganda is just saying mean things about Howie—and don’t act like you don’t enjoy ragging on DC members. Lastly, Liberation Front Possessions has you designing three new possessions for our enemies. These are worth 3 points.

Participation in all four bins will earn you a bonus of 5 points.

As a reminder, if you have questions about the RoS comps, you can check in our war room or email the appropriate DC member(s) with Blade and I in CC.

Edgar asks: SO how is the big chair suiting you after so long?

Turel made it look so easy. CON is a really tough job. Honestly, I’d say I’ve bounced between high and low points ever since I got the job. I love it when I see people riff off of clan fiction, or when I can get someone to try something new, or just when I can make someone’s day less shitty. I hate conflict and drama and there have been months where it seems like that’s all I do. But right now, everyone seems pretty hyped for the RoS and in good spirits, and that makes me happy.

Atra asks: Is there anything you would classify as a failing in your efforts thus far? How 'bout a success? How have you learned from these?

Plenty of both, though I don’t know that I have any giant standouts in either category. I’d say I’ve doubled down on flexibility and temperament being key tools. My job involves a lot of processing complaints, whether it’s members who think a policy/comp/event/interaction is bad or managing the clan summit or dealing with one of those infamous “problem members.” It’s very easy to fall into a mentality where I’m on one party’s side and not another’s. And yeah, I do represent COU as my constituency, but my experience has been that I’m a more effective an advocate the more I’m able to step back and consider the situation from different perspectives. In other words:

She trusts them to act like Sith, including the NFUs. In other words, she trusts that sooner or later, and probably sooner, they’ll try to screw her over. Alethia has no illusions that any amount of cooperation or openness will make Odan-Urr and the Inquisitorius friends; besides, organizations don’t have friends. However, she does trust than the Inquisitorius and the individuals within it will take every available opportunity to screw over their enemies and rivals, and Alethia is happy to provide those opportunities when they suit her purposes. The INQ will try to play her, she’ll try to play them, and that game goes on.

Tarvitz asks: May I ask if you have any strong feelings towards Carthage, one way or another?

Mostly I wish we knew more about them. Very little survives of the Punic language and nothing of their literary culture, assuming they had one. Also they had drunk elephants.

Vyr asks: When are Alethia and Morgan going on that date where they rumor mill and gossip about everyone in the DB? 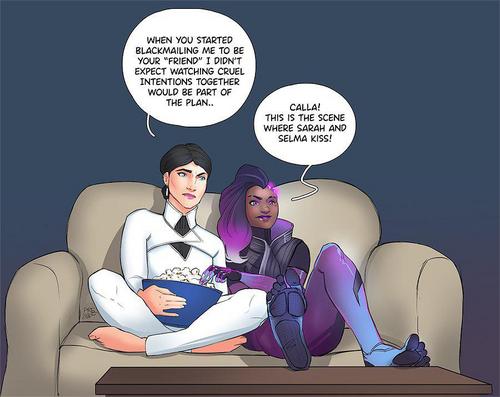 Apologies, I thought I had commented on this previously. Thank you for both the fiction update and the general report of ongoing events, especially in regards to developments within other clans. That was quite helpful in looking over what has taken place with their stories of late.