The Rite of Supremacy has come and gone, and a return to our regularly scheduled report structure has returned! I'm glad that we focused on some one on one engagement where we could during the Rite, but it's also good now that we have news beyond "There's an RoS on!" that we can get the big updates out as well. You can expect reports from the Clan and House summits on the following schedules moving forward given our new House and lack of Rollmaster moving forward:

Essentially, one report every seven days with a few extra at the end of the month before the Clan report comes around again to start the ball rolling again on the 1st.

First and foremost, I want to highlight all of our top performers from the recent Rite of Supremacy. We had three members reach 100% bin participation, with Qormus Aquila and Sinya Ani both managing the feat! Additionally, Qormus, Sinya, Tahiri of the many names now, and Alaris Jinn all were able to exceed double digit competition entries, proving that the Plagueis mantra of "we show up" is alive and well. Additionally our Clan was able to bring home 11 Novae! Sinya brought home a pair of Bronze Novae, Alaris completed the trifecta with one Nova of each type, while Qormus and Arden both brought home a Bronze Nova for their contributions to the Run On.

With all that work, Plagueis was able to push out a number of awards and promotions following the event itself.

Sinya Ani was promoted to the rank of Mystic (EQ1) - This is a great milestone for Sinya! Knocking off that first Equite promotion can sometimes be hard once the set promotion requirements vanish. Being able to keep up the pace that saw Sinya rocket up the Journeyman ranks without missing a beat is awesome!

Qormus Aquila was awarded a Grand Cross - To put it mildly, Qormus really busted it during the recent RoS. He was a member engagement machine during the event, while still doing a bang up job getting his own entries in as well. Nevermind a slew of good work he did before the event even started with his Sith Lords competition. He's a baller.

Tahiri Thorn Morte Tarentae was awarded a Steel Cross - Tahiri is an activity monster. Do comps? Yup. Do all the happy on Telegram? You betcha. Oh, and in case anyone missed it she just got voted onto the island as our newest di plagia!!!

Khryso Mallus was awarded an Anteian Cross - He's the steady rock of the Clan, the Energizer Bunny (he just keeps going and going). I've heard he's working on some new content to flesh out our lore as well, so I can't imagine he won't be earning himself some new shiny objects pretty soon.

Marcus Armani was awarded an Anteian Cross - GaiusJC is like the good version of the bad penny: he just keeps turning up. Veteran participation is absolutely key in today's Brotherhood, and I wanted to thank him for making his contributions during our recent event.

Now, I'd hoped to be writing even more awards at the close of the RoS, but so many of you had just been promoted right before the event started! Don't worry, however, because the summit and I are keeping our eyes on everything so that your activity during the RoS isn't going to be unrecognized. In fact, we have something on the horizon that's going to offer up even more opportunities for shiny objects right around the corner...

You read that right, the Pro Bowl rides again! This year's event promises to be the largest yet, as it won't be just one or two other Clans that are coming along for the ride this time. In addition to Plagueis, this year's event will also include Clans Vizsla, Scholae Palatinae, and Naga Sadow! 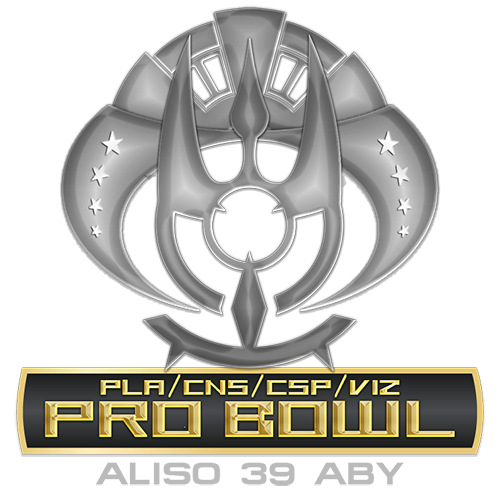 With four clans of roughly similar size competing, we'll be going back to a two team format like most of the versions of this event has played host to. Pro Bowl 2021 is a three-week, multi-event competition designed to test each and every member of the Clans. An opening event will determine which order our teams will have in a Draft-style event led by the Pro Bowl organizers (Sorry, NBA fans. No draft lottery here.). The teams will alternate their selections until the entire roster of all four clans are split between them, with equal parts of each clan ending up on each team. Once the roster is set, the three teams will battle it out in a series of events spread over the course of three weeks. Events will include the standard fare of Fiction, Graphics, Gaming, and Trivia, along with some less common events designed to help test each member of the Clans. We're aiming to provide a nicely rounded offering when it comes to the competitions on offer, and all of the events will be individual entrants so no having to coordinate team entries.

The big difference, and something that has been carried over from Pro Bowls past, is an emphasis on showing up. Every member, every entry will contribute to the overall score of each team, and lead one of them to victory. Contributions big and small up and down the roster, just like the 53 man roster of an American football team, are meaningful! This can be seen in the Pro Bowl scoring system:

At the end of the competition, the individual scores for all three weeks will be added up, and the top three individuals will earn crescents for the overall competition. Total scores for both teams, including the Week Zero event, will determine the victorious team.

Members will get more points for placing, but the biggest way you can contribute to your team's victory (and bragging rights over your opponents, be they from other Clans or your fellow Clan-mates) is just being active. So, to quote Theodore Roosevelt: "Get Action!"

For now, the leaders of all involved units are targeting a start date of mid-September, so keep that on your radar!

"But I want to Get Action now, what should I do?" is a question you might find yourself asking. Never fear, Qormus Aquila is here! The Quaestor of House Ventress has put together a series of quick and easy competitions for everyone to do in the meantime between Rite of Supremacying and the Pro Bowl. You can find the Aliso Summer Festival via the preceding link or on the Competitions page. These comps are designed to give everyone a quick and easy bunch of participation opportunities over the the month of August, with three competitions each week running on the same schedule as Qormus's Sith Lords comps from earlier this year. Remember, though! These competitions are the first Clan Plagueis events to take advantage of the new MAA policy of "More Participants, More Crescents!" Ten people enter, add that fourth place crescent. Fifteen? Make it fifth place, too. So, do what you can to stack those participations AND drive up the number of awards Howie and his slaves, I mean staff, have to dig out of the MAA mines!

I'm really excited about how well people did in the recent Rite of Supremacy, but I'm really excited to be bringing back the Pro Bowl. And, even more than that, to be bringing along three Clans for the ride. I'm really happy that the four Consuls involved, Bentre, Korvis, Shadow, and myself have seized upon this opportunity to make the Brotherhood community a little bit more of, well, a community. We're all here because we're Star Wars nerds and that's really the important thing. Working together on our own major event is going to be great for all of us moving forward, and I cannot wait to get this one off the ground.

Nice report! Congrats to everyone that got awards. Can't wait to throw down in the Pro Bowl.

I can't wait for pro bowl! woot,it is going to be awesome!

Superb report and congrats to everyone who earned a promotion or merit medal!

congrats on the promos and shineys. And looking forward to entering another Pro Bowl like before