I’m back at home and back at work, and almost caught up. I’d like to thank my awesome staff for keeping functioning so well in my absence, and for striking the right balance between taking the initiative on their own and waiting for me to weigh in. As of this writing, there are eight matches in our queue for grading and at least one open match within one post of closing, so I’ll run through this all kind of quickly.

This morning, James (praise be upon him) introduced a slight change to how possessions loadouts work. This was done in preparation for some fancy new updates coming out of the Regent office, which I’ll let Evant address in his own time. If you look at a character sheet, you’ll notice a few slight changes. 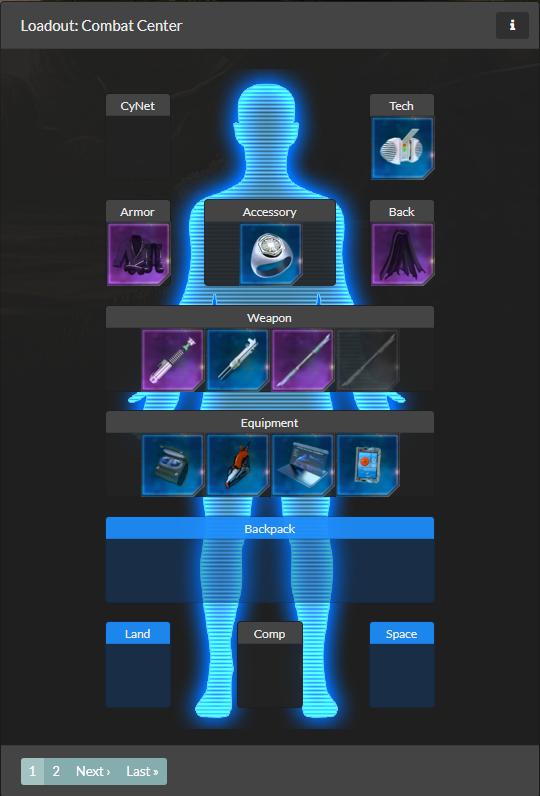 First, you have a series of new slots. Second, those slots, as well as the two vehicle slots, are blue. Here’s the key thing for the ACC: blue goes away.

To expand on that a little, when you make a loadout, you can fill all of those slots. You can use them for fiction competitions or just to show off cool items on your dossier. But when you start a new ACC match and the site generates a snapshot, it will automatically drop the blue slots.

The main reason for this is to keep the level of complexity down when it comes to ACC matches. Even without the blue slots, your snapshot could have up to five weapons, five pieces of equipment, a tech item, armor, back cover, cybernetics, a companion, and two accessories, each of which could have up to four user-defined aspects and a Regent-granted aspect. That’s already a ton of stuff for you, your opponent, and your judge to keep track of. Adding up to ten more items to the match was just going to make an existing challenge even more intense.

The only thing you are losing from ACC snapshots are vehicles, which are very commonly on snapshots but almost never used in matches. Because characters are confined to the match venue, which as a general rule does not span thousands of kilometers, all having vehicles really did for you was add another thing to look at.

Again, blue = no ACC. All of your other stuff will still show up and work as normal, and all of your loadout slots will show up as normal on your dossier and for solo fiction and run-ons.

There are three things that have come up recently that aren’t really new, but which I think need some attention.

Posts should focus on the appropriate conflict, as specified by the combat hall or ACC event description. It is a detractor for your Story score when this conflict is absent or minimized, or when the focus shifts to NPCs over member characters.

For a few years now, we’ve been following a standard the ACC staff have lovingly referred to as “the Turel Rule” that states that matches require actual combat in every post. This is something that’s pretty well established from the GM on down, so it’s not likely to change. We don’t have a golden ratio or anything, just be aware that we do expect some action from your posts, and that the focus is really on the fight between your character and whomever you’re supposed to be fighting in that match.

If you don’t want to go full Michael Bay, you do have another option:

I’ve seen Funderdome described as for “ridiculous, not to be taken seriously BS” and there’s certainly room for that. If you want to write a cooperative match where you’re trying to catch the Roadrunner, go nuts. However, it’s a space for all ACC matches that don’t fit into the more rigid formats of the other halls. If you want a match with a serious tone and you don’t want to get marked down for not having combat in every post, Funderdome will be happy to accept your offering.

This is the core of how we implement armor: 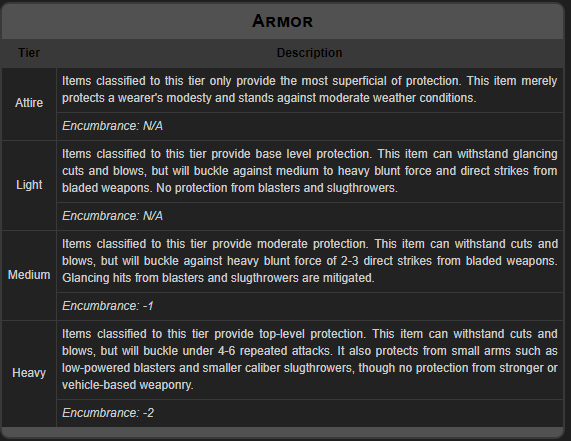 If a question comes up about whether or not a character’s armor can block something, that is language that will ultimately settle it. Item aspects are a thing, but we do not have a system in place where any armor modification or armor resistance aspect will change the base protective tier or level of encumberance.

This is something I think we can do a better job of clarifying, and that’s something I’m going to work with the Regent’s office on, but for now that’s the system we’ve got.

George Lucas (in)famously described Star Wars as being “for twelve-year-olds” a few years back, but the DB is composed of an older crowd and many of us, myself included, like to explore territory in our writing that is definitely not appropriate for young children. I don’t think there’s anything wrong with that. However, we do have a wide variety of ages, experiences, and sensibilities among our member base. While people are free to push whatever lines they want in personal fiction and, depending on the competition organizer and details, solo fiction that’s not made publicly visible on the site, ACC posts are visible to the whole internet from the main club page. Yesterday, the GM, the Voice, and the ACC staff spent a while discussing what was and was not appropriate content for that kind of venue.

This is ultimately how the GM put it: “Our rules have always been about what we see in the Star Wars universe, not what we think probably might exist.”

So when it comes to violence, sexuality, language, etc. we’re going to nudge people back towards the level of explicitness that we see in canon Star Wars media. For violence and gore, that’s stuff like this, with the extreme end probably around here. That’s a pretty wide range, but nowhere near the level of, say, Game of Thrones (looking at you, what’s left of Oberyn).

For sexuality it’s stuff like this or this. The setting is not explicit or graphic by any stretch of the imagination.

Language and obscenity is a little more annoying, but keep in mind that this is how a career criminal talks to someone he’s trying to freak out in the Star Wars universe. One good rule of thumb here is to stick to profanity that’s actually shown up in Star Wars (the nucanon novels are a little looser with this). A better one is probably to ask me if you think you’re pushing it.

The bottom line is that if the question of whether something is appropriate distracts from the story you’re trying to tell, it will have a negative impact on your score.

Matches of the Month

It’s difficult to pick one match from the last month and change, and the time spent writing it up could be better spent on closing out one of the pending matches, so this month I’m just going to highlight the recent matches. Expect to see a few more of these with more detailed commentary in the coming months.

These matches have all been judged, so you’ll get a complete story to read as well as commentary and scores.

These matches have not all been judged yet, however you still have a full story to read.

Please take a minute to read a match or two, and be sure to let our competitors know if you enjoyed their work.

Great report! Thanks for the clear guidelines on what's acceptable, with visual aids!

Awesome report! Love the new loadouts and the clarification on ACC stuff.

With the recent push from Celebration bringing in newer and younger members this is an excellent point to make and I'm glad its made. I, as an older member, am glad that personal fiction, competitions etc are exempt from this rule.

Love the new CS stuff too, always nice to see new additions and automation of rules.

And last but definitely not least, congratulations to everyone advancing to round 2, and well done on everyone who struck out on round 1, better luck next time, practice and show us what you can do!

good to see some updating

But I haven't risen anywhere!