Another month gone. It gives me great pleasure to share a number of fictional updates with all of you that have already left their mark on the Clan. In addition, they will help inform our future fictions as we drive forward to another big DB event sometime next year. Not only that BUT we have another chapter in our Clan fiction about to unfold called Midnight. Overall, a lot of great stuff. First, I’ll share with you the final results for our last Clan event named ‘Starfall’. Second, I’ll briefly speak about a Clan fiction called Bloodlines that explores the events that happened at the Imperial Palace that take place between ‘Starfall’ and ‘Midnight’. Third, I’ll re-look at some House projects. Fourth, I love bragging about all of you.

Lastly, get ready for the upcoming Clan Event, Midnight!!!

Let’s dive right into it.

Our Consul Xen’mordin and Proconsul Elincia Rei have finished judging ‘Starfall’, our most recently finished Clan competition. Personally, I am proud of the House’s performance. I am going to get into some numbers but first I want everyone to catch up on the newest entry in the ‘Starfall’ fiction series. Story is important not only to the development of our Clan but also our House. If you haven’t already please read the fictions released for ‘Starfall’:

Did you read it? Please read it.

Assuming some haven’t read it, here is a short summary. Our Clan was successful in taking over Aesirus, but in the process we were all lured underground into a mine, save for the Emperor Xen and his Proconsul, Elincia Rei. Where did everything get fwec’d up? Well, Xen is being possessed by an evil Force ghost that calls itself Fallax. After Fallax detonated some charges in the mines to trap all of the Clan underground, the despot attempted to destroy us by activating the other charages. We were the fish and he had the dynamite. In order to ‘save’ the Clan from Fallax’s wrath Xen destroyed the unused detonators, thus preventing the remaining charges going off. Elincia was not so lucky and was taken captive. (Fiction updates to be revealed a little further down)

Awesome. We are stuck underground. How did we get out? Well, that was left up to us. Xen put out a fiction competition and the winning entry may be considered for Clan canon. The competition just ended today so we should find out soon how we all got a welcoming breath of fresh air. :)

Either way, we all got out. Now what? Well, now it’s time for Excidium to save the day along with Imperium in the next chapter called ‘Midnight’. I am super excited for this Clan event because it the perfect opportunity for Excidium to show a little of a rebellious streak. Let’s be frank. Excidium was ordered to a trap the size of a planet. As a House, we should have said no and left a sizable chunk of the House behind to protect the Empire and its interests. Excidium is not a military unit full of robotic troopers and ‘Starfall’ had us playing that role. Therefore, I urge everyone in Excidium to not make the same mistake and learn from what has been dubbed the “Fallaxy Rule”: Don’t trust the Emperor and his office blindly.

Some homework for each and every one of you:

How would your character deal with this betrayal due to blind following of orders? Would they still follow every order of the Empire? Would they rebel? Would they take a more cautious stance towards the Emperor?

Now I want to shift gears and congratulate everyone on a job well done. You are all awesome people, so cheers! First, the Final Standings...

Full report with standings from the Consul

Bloodlines: An Interlude between ‘Starfall’ and ‘Midnight’

Our Proconsul, Elincia Rei, has written a wonderful Interlude for the events that occur at the Imperial Palace while we are all stuck underground.

In summary, it is a tale of escape and some insight into the struggle Xen undergoes under occupation by Fallax, the Force ghost that has possessed his body. There are some nice fights in the middle and some cool uses of the Force. In addition, we learn a bit about Elincia Rei’s secrets, which is useful to know when interacting with the Proconsul in future. I encourage everyone to read it. I won’t spoil the good bits but the punchline is that Elincia Rei escapes with some unexpected help. ^^ Just another character we could write helping us beat up Fallax!

Check out all the details here! 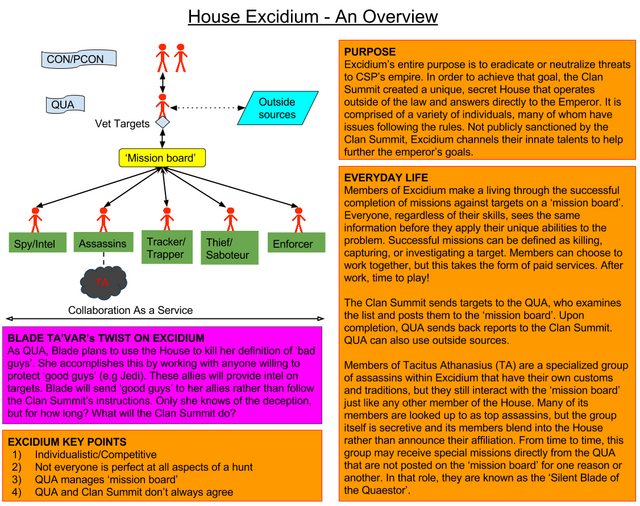 From now on, I am just going to keep this here. Why? I want everyone to keep this in mind whenever they write anything having to do with Excidium. This is how our House interacts with the Clan itself and we should ALWAYS be aware of its consequences. The current Clan events are a great example. Excidium was ordered to fully participate in a operation it should have held back a bit on. The ‘Fallaxy Rule’, which states ‘Don’t trust the Emperor and his office blindly’, was not followed. This was an issue for Excidium because it is our duty to protect the Empire against all external and internal threats. Xen, our Emperor, is one of those threats right now, even if he is possessed. We can’t let this happen again.

So just remember that when you do ‘Midnight’ competitions, keep the House Structure in the back of your mind and explore how it interacts with the Clan itself. Play with loyalties if you want. It’s fun!!

So continue to think about how your character makes their mark on Excidium because before you know it the Clan Event ‘Midnight’ will be upon us and this is a wonderful opportunity for some House development.

Personality Matrices for Everyone!

Some time a while back, I urged everyone to do a Personality Matrix and promised to share them with the House. It is now done. Everyone who publically published their Personality Matrix to the DB as a whole has been added to a shared folder with everyone’s matrix. This is an excellent resource for writing and a good resource when you are first learning about someone’s character. This should be particularly useful for upcoming fictions and run-ons!

Plenty of change has happened with regards to Excidium and one of the tasks high on my radar is to have it properly recorded in the DJB Wiki. I have done an exhaustive read of the Clan Lore and made a note of all Excidium references. What’s left? Some needed updates. Now everyone knows I love the DJB Wiki, but this amazing experience is too good to not share. Therefore, I am calling for willing volunteers who would like to work with me to ensure the voice and spirit of Excidium is well represented. As a bonus, this would count as helping out in a House project, which is particularly useful to Equites or those aspiring to become one.

Now for those who are scared, I understand. I really do. But together we can beat the DJB Wiki and we have Dek Ironius II, who won the DJB-wide Wiki competition, to help us out. It’s like a strange adventure park with plenty of weird neighbors.

The biggest thing going on right now for this battleteam is the Legacy competition series. I highly encourage everyone in the battleteam to participate as it’s goal is to accomplish some serious battleteam development. Shadow and Alara have put together a series of competitions that will explore the legacy your character leaves behind on Tacitus Athanasius. This is your chance to expand the storyline of your team and make your mark on its lore! Don’t pass up this wonderful opportunity. All of these competitions end in one month so you still have plenty of time. Do all the things!!

Some links for your ease of use:

If you have any specific questions about the team, reach out to Shadow Nighthunter or Alara Deathbane.

Great job everyone! Another solid month. Give each other a pat on the back. You deserve it.

A Clan event is just around the corner so we will be focusing on that, but rest assured there is plenty to occupy your spare time. For now, here is a quick summary of ongoing competitions. For the full list, please look here. Remember to check out all the tabs!

We do so much more than just the numbers that are tracked on the website. We are a community and I’d like to take this time to show off some awesome things we’ve done as a House that don’t quite fit anywhere else. Thank you for your contributions! 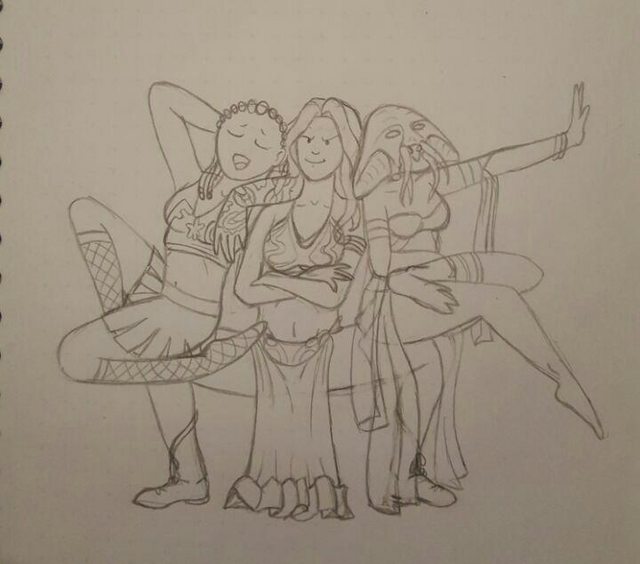 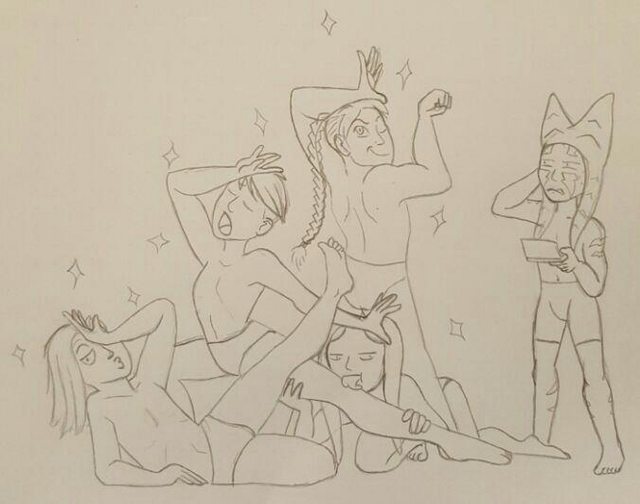 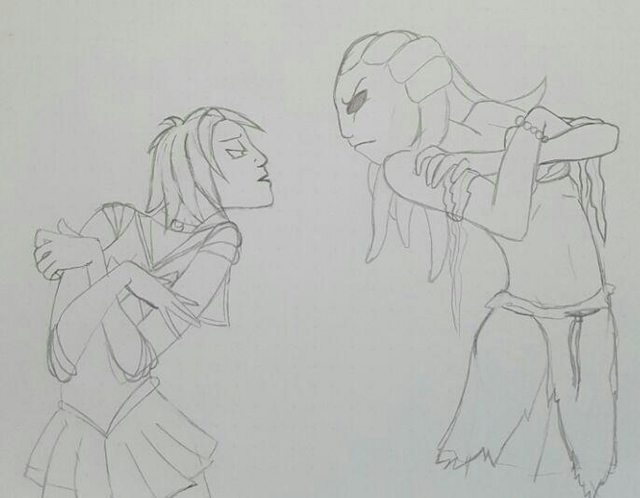 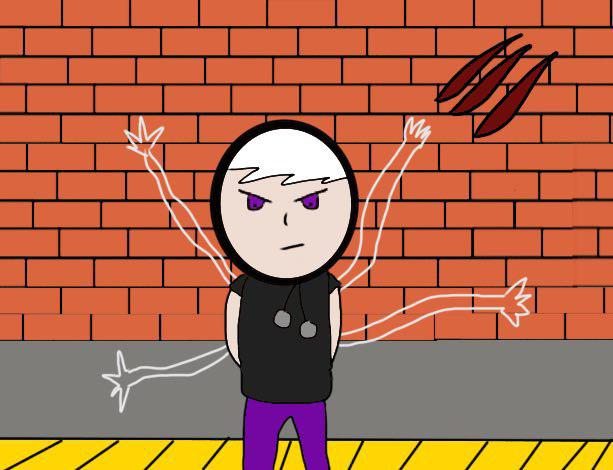 Fiction: Tales of Craziness and Mayhem

ACC fights: So many time-outs :(

The next month will be quite exciting. The Dark Brotherhood has a lot for you do during the month of December so don’t be shy. A big Clan event ‘Midnight’ is just around the corner. A big month long celebration for Rogue One is taking place in December. Tacitus Athanasius has a number of number of character and battleteam development competitions. In addition, there are some fun events going on. Now I know this month can be busy for some so do what you can and have fun. Lastly, I look forward to writing with all of you in the Clan event ‘Midnight’ and everything else in store for us in the new year! Enjoy your holidays and have a wonderful holiday season!

Reminder: Continue to explore how your character leaves their own mark on Excidium. Talk to the rest of the House about how the details might look. Apply this to your stories and complete your character sheet if you haven’t already. Also, remember to ask for ACC extensions if you need one. There is no need to time out. Email the ACC staff and it will be extended. Lastly, reach out to myself, Shadow, or Alara if there are any competitions you would like to see but haven’t got the chance to participate in yet.

To the Future of Excidium!

Blade: Damn you, Wally. Such a deep question. :D As it stands right now, Blade couldn’t kill an innocent child to prevent a war. It has no connection to anything bad. It didn’t protect a bad guy. A complete innocent in short. She couldn’t and would find another way to prevent the war. It would be easier to kill an adult that might have some dark spots to them.

Blade: Sugar cookies I decorate with my childish art.

Zehsaa asks: “What would Blade do if she has a bad hair day?”

Blade: Take another shower. Hope it fixes itself. If it was still stubborn or she was in a rush...probably say fwec it and go out anyways. Be amused by anyone who thought she was out late all night.

Xen asks “If you could be any kind of soup, what would you be?”

Blade: Matzo ball soup with turkey. Short life but so much yum.

Xen asks “Has anyone really been far even as decided to use even go want to do look more like?”

Blade: stabs Fallax for the good of the clan, accidentally kills Xen. "oh no...what will we do"

Atra asks “Why is she cuddly?”

Blade: One can only really know when you hug Blade. Come here and I'll show you.

Wally asks “if Blade could fight the ultimate sith warrior, or an animate, tangible form of the Wiki, who would she want to fight and defeat more?”

Blade: The wiki as it is the true Sith Lord. Pravus' power pales in comparison to it. Everyone is already its slave.