I’m feeling lucky this report. It’s my thirteenth report and I started it early to make sure I’m getting it out on time, and there’s big news for me to fill it with. Now there’s a lot of information packed into this news article so make sure to fasten your seatbelts because this is going to be a crazy ride.

As the Brotherhood goes through this phase of line-up changes and undergoes new projects, I want everyone to make use of this command shuffle. There are many different positions of many different types running applications right now and even if you don’t think you have a chance, it’s still useful to practice writing the applications and you never know, you may get the position. Almost every report mentions something that needs doing and so if you’re looking for a way to become a contributor, you should read through this news to find all the positions opening up in the club.

In other news, the clan is gearing up for some interesting times. With the impending new Consul and significant changes reported to us, I think Clan Plagueis is about to go through a time of significant growth. In other words, keep your eyes peeled for fresh news and content from the summit and Dark Council. I can also assure you that TuQ’uan and I have some stuff planned for the house so there’s also that to look forward to. We need your help though, so please fill out our recently released survey, if you haven’t done so yet. Your contributions are necessary for us to make the unit better for you.

On a final news point, I’m running a couple of competitions starting on the 25th. One is a wild graphic comp in which you depict a new animal in the Star Wars universe. The other is a themed fiction comp in which you utilize your inner practical jokester. Please give them a look and an entry. I’m running this pair for a whole month so everyone can find the time to take the time to put in their desired effort. I can’t wait to experience your graphical and literary art.

This month just got a big shake-up right before my report which means I get something cool and new to talk about and that’s basically what to do when you don’t have a Consul. There are of course many different opinions on such a thing, but since this is my report, you’re going to get my opinion and therefore my intentions. The first point and the simple truth of the matter is that you have no choice but to wait for the new appointment of the new one and his/her first actions as Consul. Now we can spend that waiting doing a number of things. For example, we could simply accept that we’re not getting that event Slagar was probably spearheading and mope around until the new fearless leader is ready to make one. What I think would be more beneficial is if we rolled into this change. A new Consul is a great opportunity for fostering growth as a unit and although Furios might say we should just train harder, I have a different plan in mind.

As you may have seen, leadership from both houses have put out surveys and have been starting work toward drawing in feedback from the clan. I can’t say about HAP, but I had plans for after Slagar’s event that are now able to get started sooner rather than later. Thus I announce to you that the rest of us on the summit are starting work on a series of projects and a different event in the near future that will give all of us a sizeable avenue with which to contribute to the development of the Ascendant Clan. This next few months, as we start a new chapter in Plagueian history, think about the ways you can add to your unit, our unit. As was mentioned in the most recent Plagcast, the things that we create, particularly in lore, should be created by the lot of us rather than just the summit. When we all put the time and energy into the clan, we all get the most out of being in it. I know I’ll have projects upcoming that may need volunteers and I’m sure some others on the summit may as well so if you’re looking for work to do on the clan level, keep your eyes and ears open. We’ll see what happens next as we take on each new day in stride and continue to do our part to Adapt, Ascend, and Avail.

As I said earlier, I’m running a comp to create a new Star Wars creature and I figured that since I’m not allowed to participate in my own comp, I’d just draw one for the Feature this month. So I present to you the Terulian Wolfsnake. Why is it called a wolfsnake when it has an obvious mane? Shouldn’t it be called a Lionsnake? Nope. This sucker lives in a forest environment and therefore it is more closely resembling a wolf in the way of furry predators, hence the brown and grey color scheme. 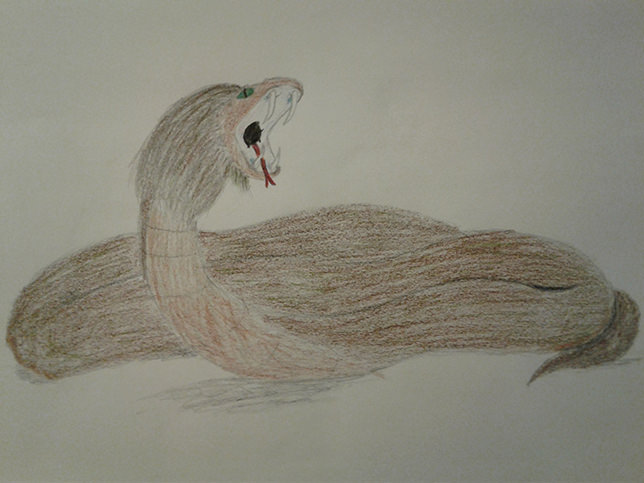 So much is going on in the club right now. I hope everyone can take advantage of this high energy time in the club and continue using it to have fun. I mean that is why we’re all here, isn’t it? I like to think it’s more fun when you get more opportunities to shape it and shape your part in it. That intrinsic value that comes with making your mark and leaving your legacies is what gives membership in this volunteer organization its meaning and so I encourage all of you to do so. Additionally, I want everyone to remember that this place is a club and therefore having a unit that is socially strong is also in our best interests. So hop on my next HKM QUA Skype Chat. It’s this coming Saturday at 8 PM CST. Keep an eye out for Telegram time alerts leading up to it or ask me if you’re not sure when that is for your location.

See you next month!

nice report... so sad our best consul is away from our clan tc and give up

Exciting times for Plag! Good luck to Slags in his future as Herald!

Awesome report!! Can't wait for the new comps and projects. :)