Hey guys. Sorry this report is coming a few days late. I just finished up a long (10-days straight) documentary. As a sound recordist, I record the interview audio, which can be 4-5 hour sessions. It was some pretty heavy material, and a bit draining combined with the hour-long commute each way from the the studio and my apartment. I did get to do A LOT of reading though, and have become absorbed into The Dresden Files. They aren't knocking Kingkiller Chroniclers (Rothfuss) off the top of my list, but they are making a strong case for the #2 spot from The Stormlight Archive (Sanderson).

Otherwise (from what I've seen) it's been an overall slow week with the American holiday and everyone following the World Cup. Expect this to change. We have some really awesome things on the horizon that will help get the motors turning again.

While my IRC presence has been slightly limited, you can always get me on my mobile communicator through E-mail, Whatsapp, GChat (or even Facebook Chat, if you have me on there). I should be back to my usual levels going forward.

What's up guys, checking in from London for one of the last times. As most of you know, I've been all over Europe (France, Italy, Germany, Austria, etc.) for the last two months, but I'm going to be back in the States in ten days. That's gonna be a huge relief, because I'll be back with unlimited internet access, a desk, a cellphone with a data plan...so, you know, life's necessities. I've been doing most of my work behind the scenes while overseas, and have been on IRC at odd British hours, but expect a big uptick in my presence and activity in two weeks.

As always, feel free to email me or snag me on IRC with any and all concerns, or if you just want to chat about my grand European adventures. Looking forward to being back in the saddle full-time soon!

The Fade Proposal was something that Dash brought to my attention originally. After workshopping details the past few months, I’m finally read to announce the proposal as a full-on initiative for Clan Arcona.

The concept is simple: a Fade is a member of the Arcona Armed forces who is selected and removed from the conventional chain of command in the AAF. A Fade, after training, swears and owes loyalty to the member they are assigned or choose, rather than, necessarily, Clan Arcona. These NPC characters are loyal to your character, and your character alone. We specifically purchased extra Wilderness Rangers to support the Fade, and we have our unique faction of Mandalorian Clan Warriors to pull from as well.

On paper, what we’re effectively doing is giving you the ability to give more personality to the troops who make up our armed forces.

For a more technical explanation:

The Fade Initiative was established to reward Arconans for their efforts in recruiting and retaining future Shadesworn. As rewards for these services, Shadesworn of any rank can earn "Fades", expertly trained soldiers within the Arcona Armed Forces. Fades are loyal to the Shadesworn they are assigned, and not Arcona as a whole. The Fade Program draws from Arcona's Mandalorian Clan and Wilderness Rangers. These NPCs require a stub on your wikipedia page, or their own dedicated page to count for fictions and ACB Contracts.

Below is the current list of Shadesworn who have earned Fades

So how do you about making your Fade? I’m glad you asked. I’ve created an outline/template for you guys to take advantage of. You can find it here. Things that will be required:

As an example, I’ve gone ahead and created my own two Fades to serve as guidelines. I used TOR’s character creator to generate “headshots” for each of my characters. Just one of many ways to find an image for an NPC.

So, long story short? Start recruiting. And not only recruit, but get them into the system. Show them the ropes. Show them why there is no where else they want to be besides Arcona. The sky's the limit for us.

In other news, I will be updating the Shadesworn Rankings in the coming week. I’m catching up still on a lot of work, and wanted to get this out first. This is next on my long list. Thanks for the patience kids :).

With the success of Operation: Sojourn, Cethgus and Valtiere have gotten together and started working on ideas and details for the next Arcona Event. Expect to follow similar scoring and format as Operation: Sojourn, but with a twist in how teams will be determined. More information to come as it develops :)

Round 3 is slowly coming to a close. Sarin is on a well-deserved break with his family (and having fun in Disney World without us </3) and Mav is also back from the holiday weekend. So, just continue to be patient as we await those results.

Continue to support your clanmates as they continue to fight. In the next rounds, things are really going to heat up. Our numbers, by sheer process of competition, are honing in. Even if you're no longer in the tournament, support your friends, be there to proof for them if they need it, and continue to work together as a team.

We fight until the last of us is standing at the finish line with the championship belt held high. Hoo-rah.

The Arcona Summit is the largest leadership team in the Brotherhood. As a result, there tends to be a lot of love to go around at the end of the day. This past month, we have seen Legorii rise to Krath Pontifex and Atyiru Caesus Entar rise to Krath Archpriestess. Krath ranks are lame--I mean, woo!

Slow and steady wins the race. Last year around this time we were seeing a record number of Dark Jedi Knights. This year has been a bit slower, which is to be expected with the Time-In-Rank and other changes made to the Knight Trials. As with anything, however, we have adapted and grown with the system. As such, I'm proud to say that Arcona has, today, just Knighted it's 6th Dark Jedi Knight in Antar Locke! Just before that, we also saw Lexiconus reach the milestone as well! And let's not forget that Rrogan Skar started it all off with his elevation as well!

We are so proud of you guys, and look forward to seeing how you go, from here, to leave your marks in the history books of not just Arcona, but the Brotherhood.

For more on the Arcona System (TM), and what's going on with our latest journeyman, keep an eye out for Andrelious' next Rollmark report.

The new Headmaster has seen fit to award members of the SA staff with Scrolls of Foundation based on work as Professors and Docents and such. Go Team-SA!

The first month of the ACB Pilot for June was a great success. We had a few bumps along the way (as expected from BETA) and have used some of the feedback to come up and implement new policies and methods going forward. The most notable ones are thus:

With those changes in place, I'd like to report the results of June Pilot: 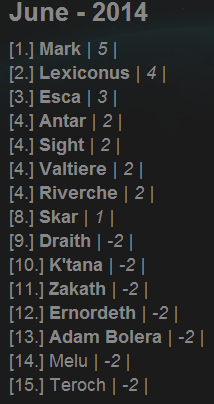 Congratulations are to be given to Mark (Andrelious) who now becomes the (first!) First Blade of Arcona

Enjoy it while it lasts, though, for the scores reset back to zero for the July Pilot. That means it is anyone’s game. If Mark wishes to keep the title of "First Blade", he's going to have to earn it. He will have to watch his back though. Lexiconus was only a point away from edging out Mark, and I have a feeling he's going to turn up the tigerblood for next month. Don't sleep on Esca, either!

The July Pilot can be found here.

Once again, I ran a Live Q&A session with Google+'s Hangouts On Air feature.

You can view the live Q&A here:

Wherein: Wally does a barrel-roll, talks about the Fade and the ACB (more detail above in the report), answers random questions, lets Sheba makes a brief cameo and gives Turel a special position.

As usual, if you guys have any questions or feedback, please let me know. I'm here to serve, and will always do everything in my power to help you guys enjoy this club, and to feel a part of Team Arcona.

Around the DB News

I'm going to be trying out "Discourse" for our comments on this report. Please leave comments, questions, praise, hate-mail, ect as we test out this function and work on better integrating our forums into the mainstream use of the DJB :).

That's all for now. Arcona Invicta.